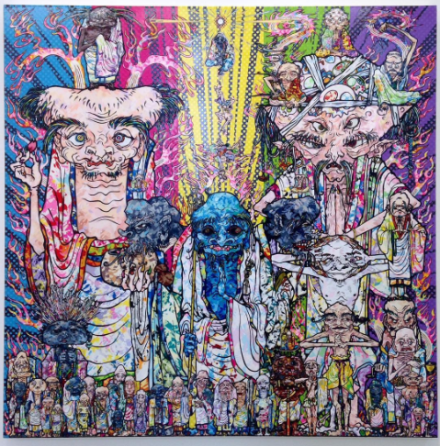 Takashi Murakami, title to be determined (2016), via Art Observed

Continuing a body of work that has dominated his focus over the past several years, Takashi Murakami returns to Galerie Perrotin’s Paris location for an exhibition of new work that delves deeper into is fascination with Japanese spiritualism, while pushing its engagement with the history of contemporary art ever further.  Drawing influence, and often direct subject matter, from masters of 20th painting, including Francis Bacon, Roy Lichtenstein, and others from the canon of Western art history. 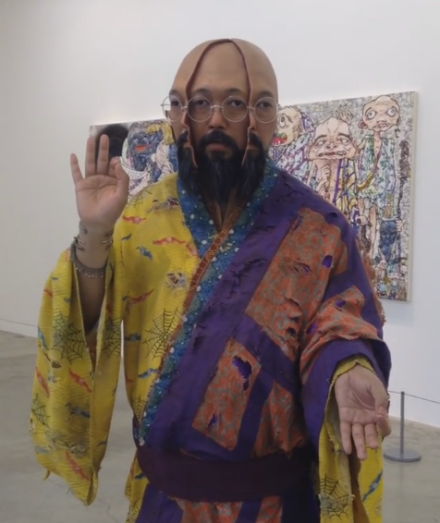 The exhibition runs through a series of works that return to the artist’s recent fascination and repeated depictions of Japanese Buddhist teachers and mythical figures, rendered in florid, overflowing styles that fill the canvas with colorful swirls of paint and countless animated characters that flit across each piece, maintaining close ties with the artist’s ongoing explorations and utilizations of the language of Eastern pop culture in conjunction with his own body of work.  Yet his works here also work in deeper references to the history of contemporary painting, particularly with Western artists.  In one piece, Murakami’s Mr. Dob character swirls in a distended haze over a piece that draws much from the spray-paint compositions of Christopher Wool, allowing this slight graphic embellishment over the dark and hazy surface to offer an increased sense of contrast and dissonant energy. 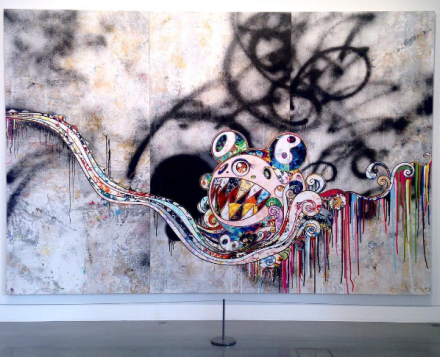 The increased prominence of the Western canon in this body of work is an intriguing and noteworthy point, as if Murakami had turned his search for spiritual figureheads away from the Japanese Zen Masters, or perhaps broadened his scope to search for cultural parallels in the West.  He seems to find them in Francis Bacon and his Western, Post-War contemporaries.  Juxtaposing his images of hobbled arhats and other spiritual teachers with the visceral approaches of Bacon, Cy Twombly, and Sigmar Polke, the artist turns the capacity for spiritual dedication and enlightenment inwards, into his own craft.  In several diptychs, he re-creates some of Bacon’s most famous works, warping the faces and forms into a language much closer to his own continued use if “superflat” techniques. 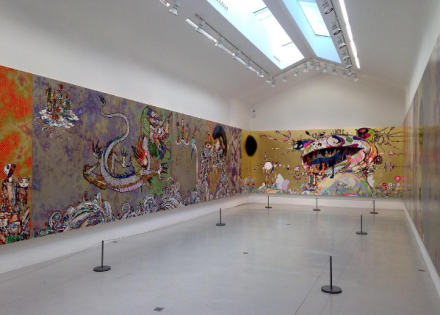 Or perhaps another reading is possible.  Looking throughout the show, Murakami’s own likeness appears most prominently, and most realistically as a robot, a chanting student of the Buddha, dressed in rags and surging forth from the split husk of his own form.  Murakami the artist is posed not as a orchestrator or master in the negotiation of these two lineages visible in his art, but rather, as the student.  He is the medium itself, learning and reciting both the language of art history and that of Japanese buddhism in tandem.  It is through the student’s eyes that we are presented with this fusion of Eastern and Western touchstones, and through his interpretation that the artist makes these connections most explicitly felt.

Learning the Magic of Painting is on view through December 23rd. 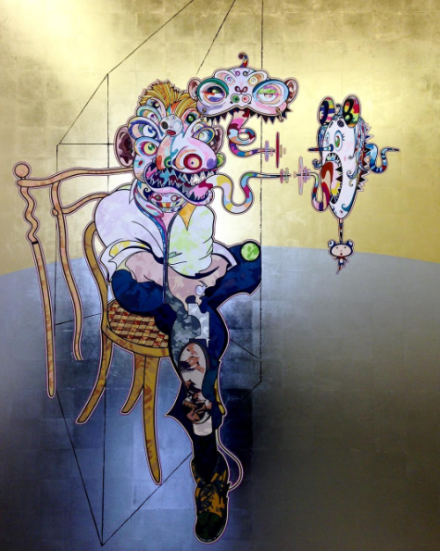 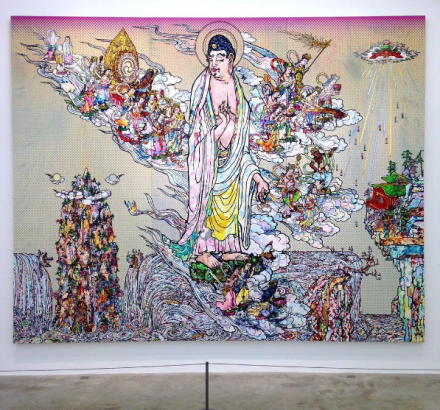 This entry was posted on Thursday, November 10th, 2016 at 2:26 pm and is filed under Art News, Featured Post, Show. You can follow any responses to this entry through the RSS 2.0 feed. You can leave a response, or trackback from your own site.