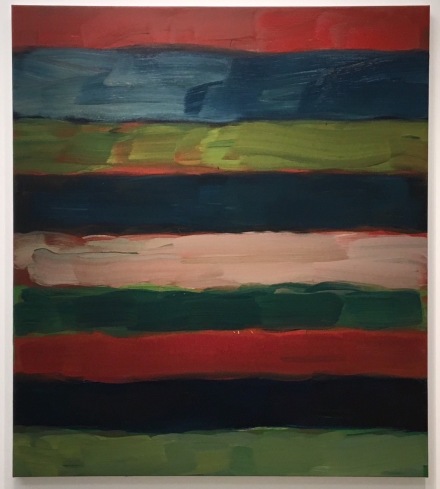 Timothy Taylor Gallery’s Mayfair exhibition space has compiled a series of Sean Scully’s monumental abstract paintings, recent works that tower above the viewer while engaging them with deep, meditative arrangements of color.  Shown in conjunction with a collection of sketches, notes, letters and diary entries, the show’s expansive focus offers a rare look into the Irish painter’s psychological and conceptual investment in his works.  The series, Landline, has been ongoing since 2013, and continues to offer the artist an opportunity to refine and reshape his approach to the canvas through a narrow, yet endlessly inventive engagement with the power of mark-making, and the purity of delineation between linear planes, both explored through the expressive capacity of color. 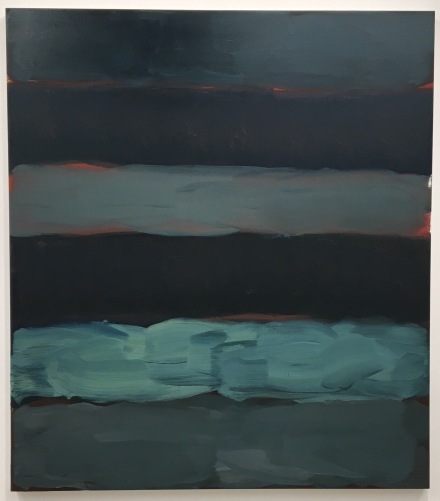 Having fine-tuned the striped motifs of these works throughout the course of his career, Scully has long operatied as one of the leading figures in post-war Abstract painting, taking a unique pathway through American painterly traditions informed by his early life and work in Dublin and London.  His work is a fusion of American abstract-expressionist power with a more philosophical and methodical application of a paint, showing a keen awareness for European art history. Using rich colors, spread in a thick impasto, he explores modular forms and shifting positions through each mark and line, often creating a space for introspection and reflection in flurries of brushstrokes.  His thick application of oil paint creates textural planes, suggesting something of the architectural in his sense of the canvas. 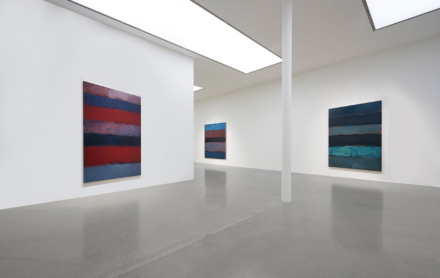 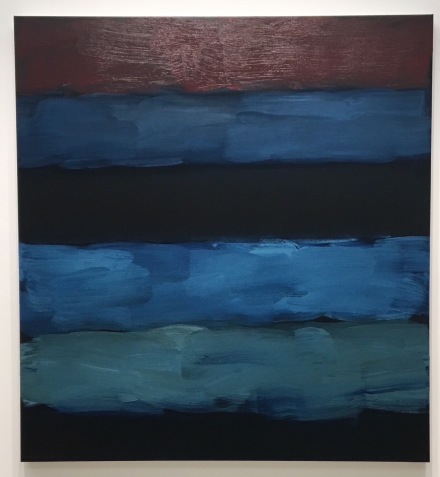 One might even embrace a reading of his work as sculptural, particularly in considering his gradual move away from structural tools like tape and drawing grids to render his blocky, spatial compositions, as if he were crafting with material in multiple dimensions.  While traces of earlier work are present, including criss-crossing layers of color and variations in the strength of each mark, Scully’s recent paintings seem to move ever further from any sense of mechanical operation, favoring a considered and free-flowing approach that lends his pieces a considerable lightness.  Rather than a sterile swatch of color, his rectangular sections are slowly built up over time, layer by layer to elicit more emotional responses, rendering hand drawn stripes that are particularly aware of their physical, and often fragile sense of balance. 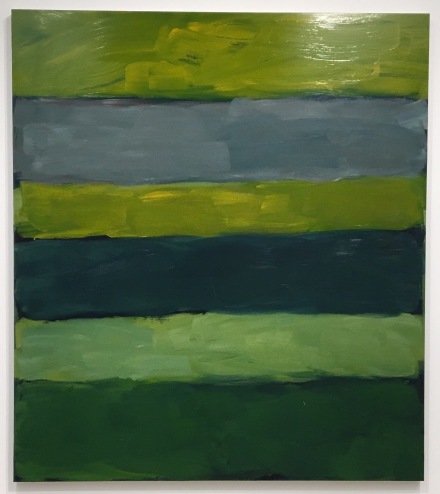 In these Landline works, Scully closely examines the notion of an horizon, specifically the planar relationship between sky and earth. With an interest in travel and a deep connection to the natural world, his new works represent the joining of two planes, removing the vertical axis, and stacking the horizontal bands of color he to explore grander schemes of philosophy, nature, literature, and architecture in concentrated, simplified forms.  Each mode of color has a power in its own right, but equally functions to amplify nearby bands of color, creating operations and exchanges over the surface of the work even as the viewer moves their eye over each surface. 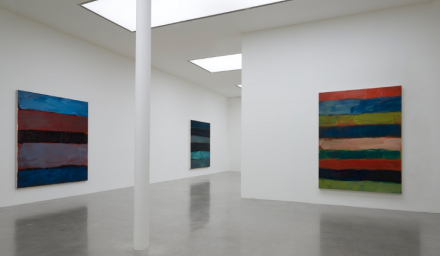 On first glance they appear bright and kinetic, but the intensity and power unfolds slowly over time, and often doubles back on itself, as a sense of the cohesive power of the the pictorial space emerges from its varied elements.  Scully’s paintings require immersion, a surrender to the engulfing capacity of the paint, and its overlapping moments of visual complementation.  Presented here on such a massive scale, this approach presents itself on an ever-larger playing field.

Horizon is on view through December 17th.

This entry was posted on Thursday, December 15th, 2016 at 12:15 pm and is filed under Art News, Featured Post, Show. You can follow any responses to this entry through the RSS 2.0 feed. You can leave a response, or trackback from your own site.