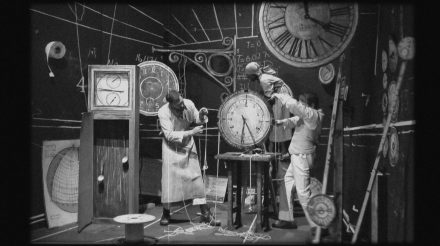 William Kentridge, The Refusal of Time (2012), all images courtesy the artist via White Chapel Gallery.

Now through January 15th, Whitechapel Gallery in London is presenting a new exhibition of work by William Kentridge, one of South Africa’s pre-eminent artists. William Kentridge: Thick Time features six large-scale works created between 2003 and 2016, spanning a range of mediums and thematics that reflect Kentridge’s intense engagement with theories of time and relativity, the history of colonialism, and revolutionary politics.

The show offers a major opportunity for viewers to engage with a range of the artist’s works from the past decade in one space, tracing themes and concepts related to his own research.  The Refusal of Time, for instance, draws on attempts to capture time as material objects, sounds, images or mechanical structures, each incorporated into an immersive, multi-sensory installation work inspired by a series of conversations between Kentridge and American scientist Peter Galison about various theories of how time is structure, and how if functions.  At the heart of this work is a breathing sculpture or “elephant,” modeled on 19th century attempts to measure and control time.  This work is a collaboration between the artist and composer Philip Miller, projection designer and editor Catherine Mayburgh, and Galison. 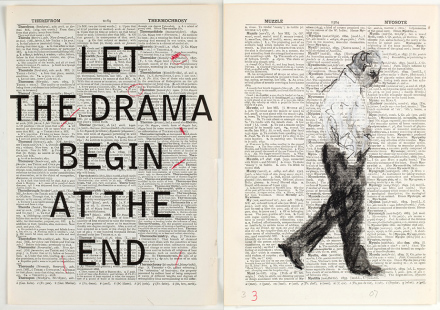 The show takes great care to place such expansive concepts and objects into conversation with broader aspects of Kentridge’s career.  For instance, his piece O Sentimental Machine (which has never been shown in the U.K.) draws on inflections of similar machine imager onto the human body, while Second-hand Reading (2013) presents a series of mural-scale tapestries based on Kentridge’s opera production of Shostakovich’s The Nose, a piece that explores the malleability of public perception and the blind will of tyranny through satirical means.  The range of works here underscore his engagement with broader networks of creative practice, and find an equally interesting conversation with the set models for his production of the opera Lulu, which ran at the Metropolitan Opera in New York last year. 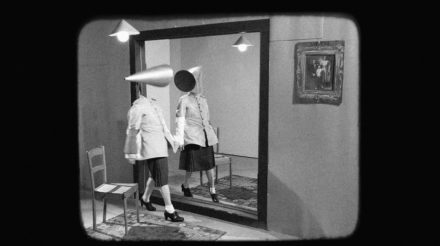 At the core of O Sentimental Machine is Kentridge’s political critique of Russian revolutionary Leon Trotsky, and his notion that people are ‘sentimental but programmable machines.’  In this work, subtitled videos of speeches made by Trotsky are projected onto glass doors on either side of the installation, offering the viewer the opportunity to observe what is going on behind the closed doors, while also exploring and drawing on conceptions of the human form as the site where both Trotsky’s opinions and the political histories he was a participant in, ultimately play out. 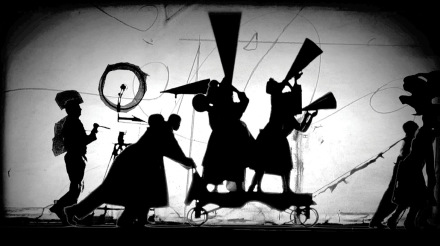 William Kentridge, The Refusal of Time (2012)

Kentridge’s work is on view through January 15th.

This entry was posted on Saturday, December 31st, 2016 at 12:23 pm and is filed under Art News, Featured Post, Show. You can follow any responses to this entry through the RSS 2.0 feed. You can leave a response, or trackback from your own site.