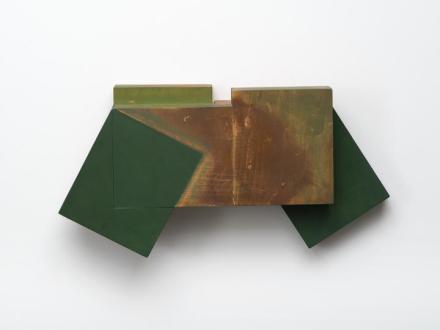 Now through January 7th, Dominique Lévy is hosting the major first survey of early wood reliefs by American sculptor Joel Shapiro, an exhibition that seeks to demonstrate the trajectory and development of Shapiro’s career, while foregrounding his work with pieces from the late 1970’s and ultimately culminating in a recent body of room-sized sculptural assemblages.  The wood reliefs, presented alongside a new site-specific installation, trace a practice constantly in pursuit of uses of color and mass to shape perceptions of space while exploring individual material interactions.  This marks the first time the series of wood reliefs will be comprehensively surveyed. 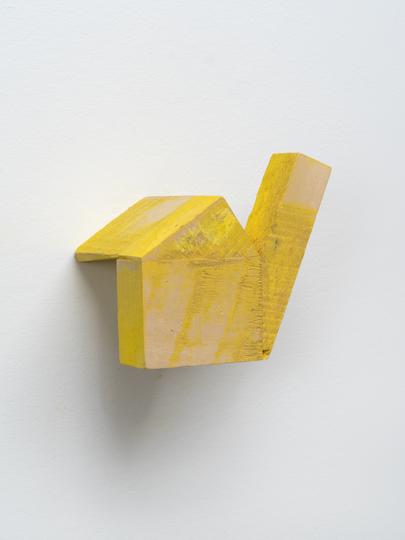 Since 2002, Shapiro has frequently worked with the idea of collapse.  Through large-scale installations and sculptural objects, the artist has explored and frequently elaborated on the idea of the collapsing, structurally insolvent form, seeking to reflect “the projection of thought into space without the constraint of architecture.”  Shapiro describes a pivotal moment in his art-making career when he discovered the freedom of lifting form off the floor and finding more playfulness in the air.  Along these lines, the second floor of the gallery will be dedicated to a new site-specific sculpture that is part of a recent body of work concerned with the articulation of form in architectural space.  To create this work, Shapiro constructs wood elements in his studio, then paints them with hypersaturated casein, lending the works a deep, textured patina.  These forms are then suspended in the air by means of cordage, and connected to the gallery floors and ceiling. As Shapiro installs the work, decisions regarding the configuration and orientation of the work are made spontaneously, presenting a reflection of the artist’s thorough engagement with the gallery space. 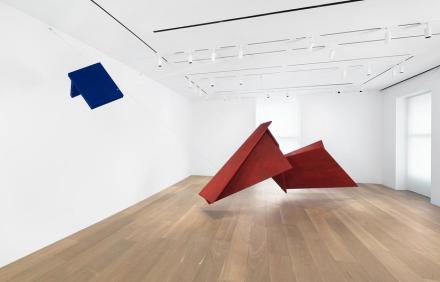 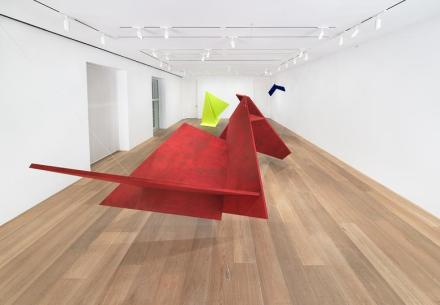 Shapiro’s early work and the wood reliefs on view at Dominique Lévy represent a direct response to Minimalism’s insistence on non-referentiality, and seek to introduce the art object to an ambiguity of psychological and affective experience.  The wood reliefs are made up of simple shapes and angular cutouts, forms playing on familiarity and legibility, often drawing on the architectural and structural demands of placement to lend them a certain textual grounding, all while pushing the forms themselves into a more loosely associative framework.  The referential quality in Shapiro’s work is never explicit, but instead, the sculptures “appear simultaneously abstract and figurative.”

In Shapiro’s work, the dimensions of physical mass are complicated or manipulated by the artist’s hand. Color, orientation, and suspension reflect a supremely evocative play between abstract and representational form. This exhibition rewards close and careful viewing. As Shapiro articulates, “the work is about my experience, and if you care to participate, to look, then you bring your own history to the situation.” 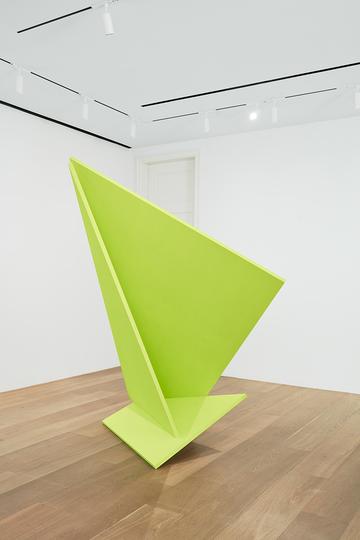 This entry was posted on Thursday, December 29th, 2016 at 12:15 pm and is filed under Art News, Featured Post, Show. You can follow any responses to this entry through the RSS 2.0 feed. You can leave a response, or trackback from your own site.