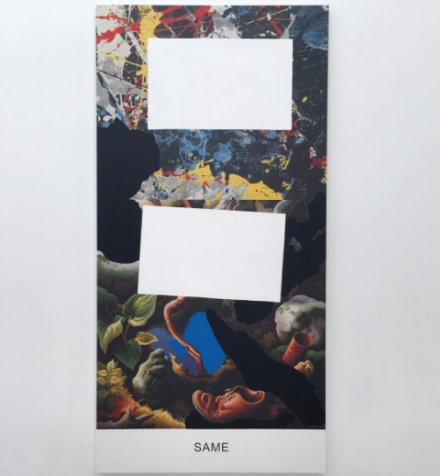 For the past several years, artist John Baldessari has continued to mine a particular mode of textual and graphic interrelations.  Combining disparate systems of images, texts and manipulations on the surface of the work (all of which have become hallmarks of his approach respectively), his images in recent years have taken on a sense of theme and variation, exploring the varied interpretive contexts that seem to emerge out of his simple juxtapositions of form and language.  This almost procedural approach to the image continues in his most recent body of works, currently on view at Marian Goodman in New York. 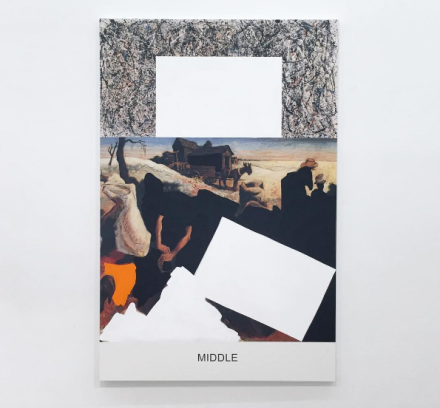 Baldessari’s works on view will appear familiar to anyone following his recent work, but there’s an equally distinct tie to more historically resonant works.  Subtracting elements from the picture plane, or obscuring defining characteristics of his sourced images, the artist makes a notable connection with his early works.  Yet here, these moves are freed from carrying the sole semiotic weight of the work, and instead are presented as one of several operations on the canvas.  They are accompanied by sparse linguistic fragments, often single words that conjure immediate and often vivid sensations in complement with the images themselves. 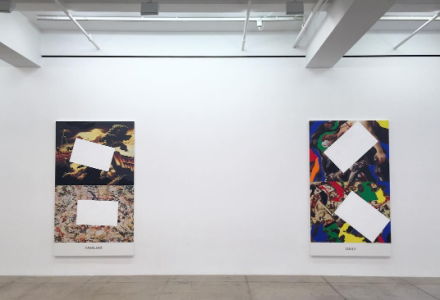 Yet here, one can also note a distinctly minimalist tendency towards Baldessari’s modes of working.  His images draw only from the catalogs of painters Thomas Hart Benton and Jackson Pollock, with one work by each placed into juxtaposition on the canvas, and contrasted by a lone word.  In some, the works are also covered by flushes of paint, accenting the structural form of each composition or using bright tones to deconstruct their consistency as an image, much in the same way that his blocks of white break apart any conception of visual consistency.  The narrowing of inputs opens a striking line of comparison, a focal point through which to consider varied readings of American art history in exchange with Baldessari’s own, often comical, inflections of language and gesture. 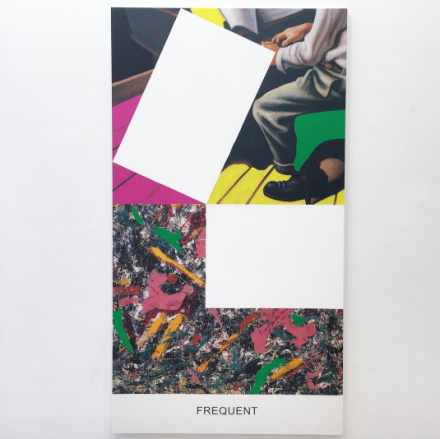 At the same time, this reduction of his subject matter to a series of choices and placements equally opens up a more studied exchange with form and flow than previous investigations have seen for the artist.  In one work, Same, from the series, Baldessari’s comparison of images places a striking column of movement and color running through the center of the work, ultimately tracing a shared visual motif across the canvas that gathers additional strength from the titular word scrawled across the bottom of the piece. While other works push readings and connections between works that are decidedly more obtuse, Baldessari’s ability to conjure specific visual relations, or momentary glimpses of his own thought process in assembling these images speaks to his continued inventiveness and wit.

Exploring this sense of visual and textual convergence, Baldessari’s series of pieces are on view through December 23rd. 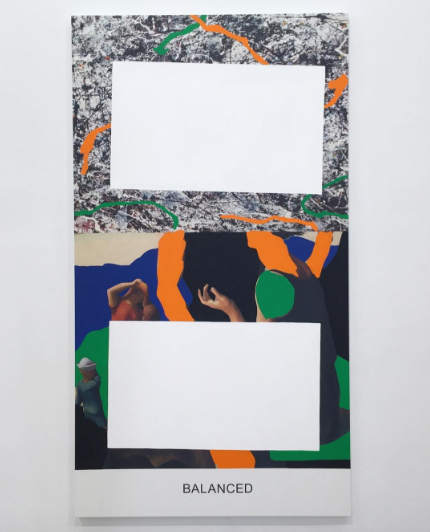 This entry was posted on Wednesday, December 21st, 2016 at 12:23 pm and is filed under Art News, Featured Post, Show. You can follow any responses to this entry through the RSS 2.0 feed. You can leave a response, or trackback from your own site.