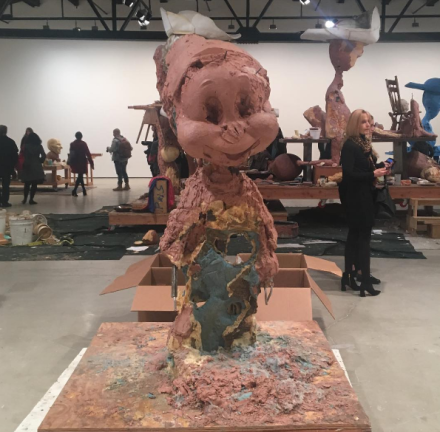 Returning to his ongoing fascination with the iconography and commodification of the legend of Snow White, in conjunction with reprisals of varied other series from the past 15 years of his practice, Paul McCarthy’s newest exhibition at Hauser & Wirth is a flurry of both subject matter and materials.  Massive, flaking and chipping sculptures are spread throughout the gallery’s cavernous exhibition space, each one drawing on threads of both the historical and cultural in the American psyche.  Pulling from a wide range of works that define the artist’s sculptural practice (in conversation with his video and film productions), the show offers an expansive exploration of both his sense of humor, and his keen eye for commentary. 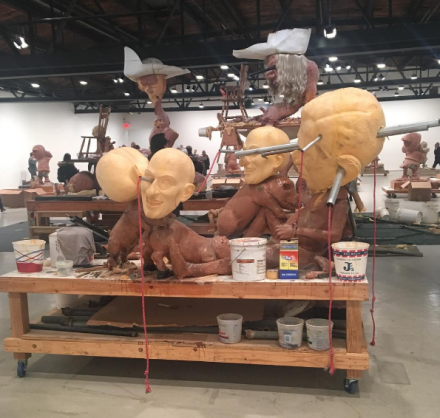 Ranging from depictions of George W. Bush, to visceral recreations of what appear to be the dwarves from the Disney Snow White film, on to a series of vividly distended pirates, the show is packed to the gills, with little space afforded the viewer to pass between each object.  The sheer scale and depth of McCarthy’s sculptural vision is turned into a daunting field of bodies, each twisted and perverted by his approach to the sculptural form.  Presented as both a series of remaining works from previous series, as well as a return to many of McCarthy’s previous themes, the show presents a range of interests in concert, as McCarthy’s subversive, irreverent wit takes its course through a series of variations on theme and subject. 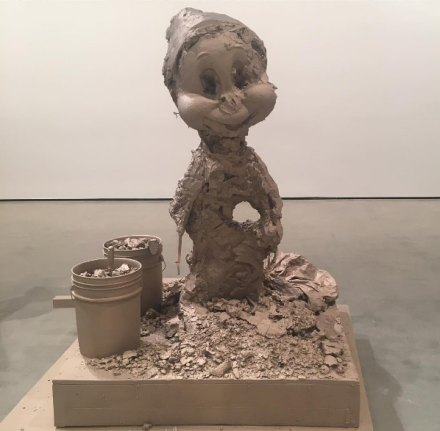 The show focuses primarily on McCarthy’s works from the WS series, including a number of his sculptures depicting the seven dwarves.  Drawing on the dwarves from the Disney adaptation of the original tale, McCarthy’s figures are disturbing reinterpretations, blasting away huge chunks of their bodies and faces, as if the figures had been violently disfigured or damaged in the process of creation.  Several works command considerable response from their shattered visages, which render a particularly disturbing effect on the viewer, particularly as the moorings for these images become more apparent.  Elsewhere, bodies are hollowed out or punctured, again drawing on perceptions of decay and degradation that offer striking undertones to McCarthy’s participation in the imagery of Disney’s sanitized legends.  His figures emphasize their own emptiness, their own absence of life in a manner that echoes the company’ mechanistic creation of cultural icons. 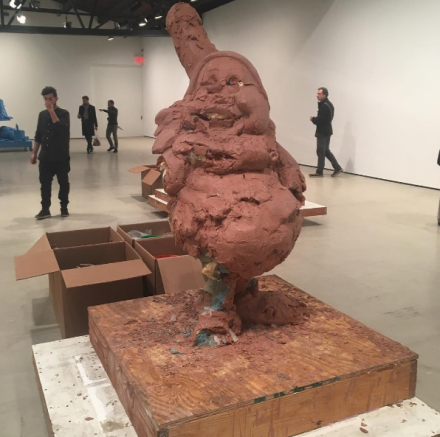 By contrast, the works in McCarthy’s Pig Island series, which returns a famed sculpture of George W. Bush embattled by a series of malicious sprites here, draws on the familiarity of public figures to deconstruct and critique their impact on the world.  Twisting Bush’s form into a pathetic, yet sinister image, McCarthy’s puppet underscores the maneuverings of American politics, twisting the landscape of early 21st Century politics into a frighteningly dark form, one which resonates all the more loudly today. 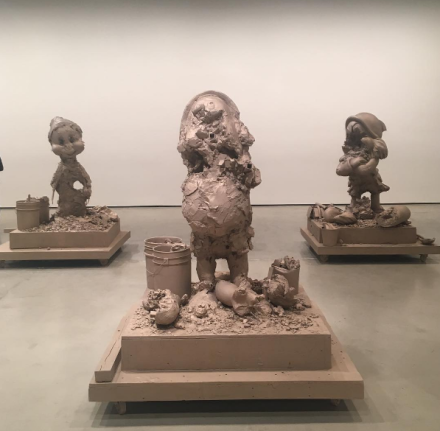 Much in the same way, the artist’s Chop Chop, Chopper, Amputation plays on iconographies of both cartoon and real-life violence, leaving a form that sits squarely between these two cultural poles.  Serving as a strange focal point in the exhibition, the massive work underlines the powerful id at play both in McCarthy’s world, and more subtly, in the world that he parodies.  Viewing these images, one cannot help but feel a flicker of recognition through shock, a sensation that grows and amplifies through the scale of the show.

Raw Spinoffs Continuations is on view through February 4th.

This entry was posted on Wednesday, December 28th, 2016 at 12:15 pm and is filed under Art News, Featured Post, Show. You can follow any responses to this entry through the RSS 2.0 feed. You can leave a response, or trackback from your own site.