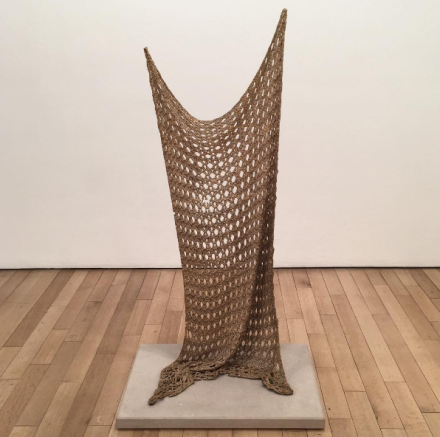 Artist Michelle Grabner has work on view at James Cohan Gallery in Chelsea this month, continuing the artist’s explorations of intersections between physical and social contexts for her chosen materials, and the resulting conversations between the contexts of fine art and the artist’s own life and practice. 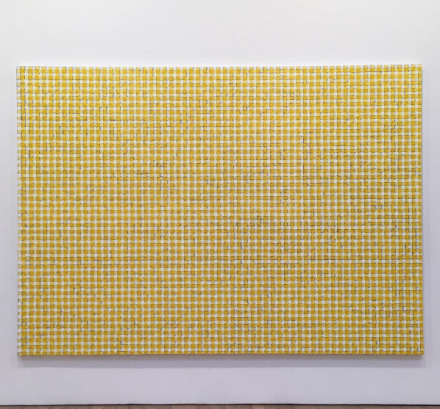 Consisting of a series of cross-hatched paintings and bronze netting sculptures, the artist’s pieces are drawn from an engagement with her own accumulated supplies.  Her paintings, which take on the appearance of roughly stitched fabrics, are created through a careful layering process, painting grids with the help of cut and manipulated blankets.  These fabrics are also on view as well, spread throughout the space as bronze renderings created after Grabner had completed her work with each.

Grabner’s works play on the dissonance of state that defines each of the works on view, and their respective roles in the creative process.  Each of the bronze nets on view are cast from varied netting sets used by the artist to create the canvases hung on each wall, canvases that offer a playful twist on domestic craft that equally translates the traditional sphere of “women’s work” onto the canvas itself, and into the language of post-War American abstraction in turn.  At the same time, these nets take on a similar thread in 20th Century sculpture, their rips, twists and openings, frozen in a vertical arrangement that defies their lifeless form, and plays on the emphasis of movement and energy that so many male artists embraced during the era. 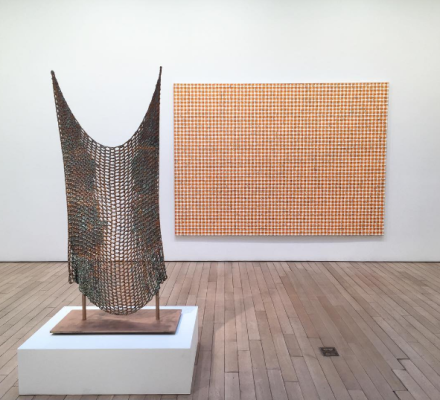 Yet the blankets and nets themselves also take on a plurality of roles and contexts in this show.  Their surfaces reflect years of wear and tear, as Grabner gradually introduces each into her practice after other uses.  In some examples, they have been swiped directly from the domestic sphere, and often bear the marks of intense use.  It carries with it a sense of both artistic process and life outside the field of art, each operating on the object in its own manner before the object becomes a framework, or perhaps a map, or its own, tracing grids and lines over a more traditionally accepted artistic format.  Grabner’s participation in this continuation of the object is subtle, and her hand frequently seems to fade in and out of the works themselves, but always in a manner that retains the interactions and relationships between each piece and its respective context.  Serving as a conductor of sorts, she allows each of these elements to change and shift in their relation to her own hand.  Considering the vaguely human poses of each blanket, with their reaching, stretched corners, this emphasis on human action, and the human body as both infinitely absent and withheld, is particularly notable.

Grabner’s work is on view through January 28th. 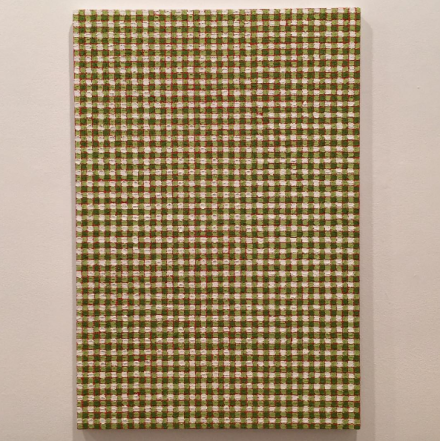 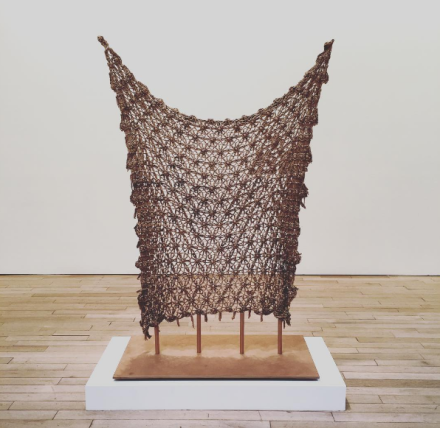 This entry was posted on Tuesday, January 17th, 2017 at 5:44 pm and is filed under Art News, Featured Post, Show. You can follow any responses to this entry through the RSS 2.0 feed. You can leave a response, or trackback from your own site.