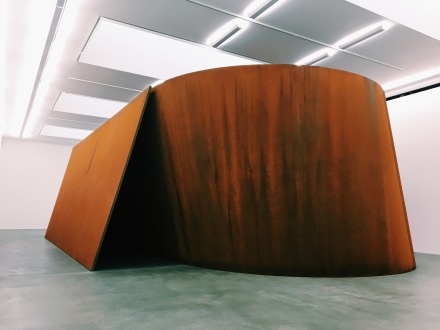 Richard Serra’s works are nothing if not an experience; curving, twisting forms that wind the viewer through space, while taking an active hand on shaping the space itself.   Throughout the artist’s career, he has continued to create works that challenge conventional understanding of form, and re-conceptualize notions of gravity in play with his objects.  Working within this familiar domain, Serra is currently presenting three unique, large-scale steel sculptures at Gagosian Britannia Street, London. On view through March 10th, 2017 his new works highlight his mastery of material, and his unique ability to continually pursue a sense of creative vitality.  In some sense, his works here: NJ-2 (previously on view in New York), Rounds: Equal Weight, Unequal Measure, and Rotate, exist as portals of some sort, gateways into a repositioned experience of space, and the act of viewing work within a given series of physical constraints. 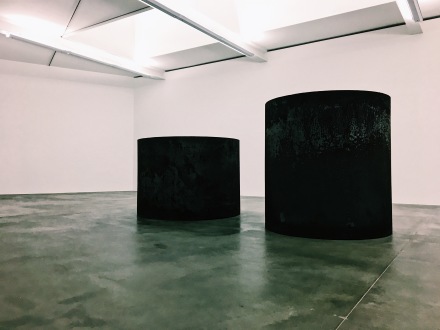 Born in San Francisco, Serra has lived in New York since 1966, where he has continued to develop his methodical processes in steel, using the weighty material to disrupt, confront and challenge an individual’s sense of self and bodily relation in space.  His new series continues this practice, pushing an awareness of both the monumental form, and the grounded sense of serenity that ultimately furthers its visual operations.  Presented here, this new collection of works functions as a series of immersive environments, welcoming the viewer to engage with both interior and exterior architectures. 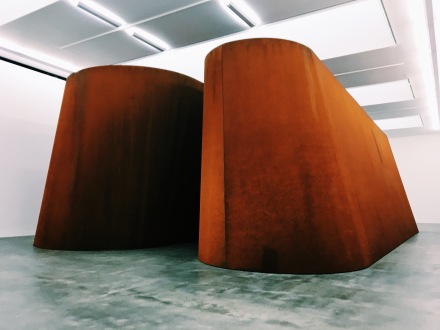 Placing weight as a primary concern in his works on view, Serra plays upon dualities in nature and in the viewer’s sense of perception.  Commanding attention due to its stability and grounded presence, NJ-2 is both greatly dense and kinetically inviting, pulling the viewer through a snaking internal logic that constantly subverts their sense of position, accented by its rich amber tones. The work disrupts one’s path, forcing a consideration of time and presence through the artist’s simple sculptural elements.  The work becomes an evolving series of movements, defined in part by the viewer’s participation in the work itself. 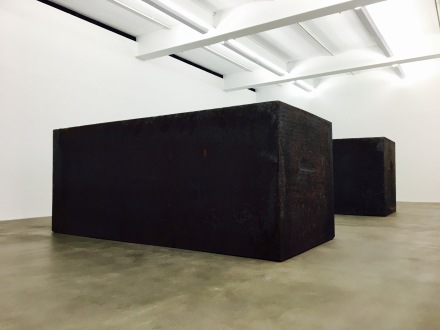 With a keen focus on physicality and an appreciation for materials, Serra has said of his practice that, “matter informs form.”  There is a sense of rhythmic gesture within each of his metallic bodies, a certain compulsion of form that both pulls the viewer towards their monumental scales, and sets them on varied explorations of their surfaces.

This entry was posted on Tuesday, February 7th, 2017 at 12:42 pm and is filed under Art News, Featured Post, Show. You can follow any responses to this entry through the RSS 2.0 feed. You can leave a response, or trackback from your own site.