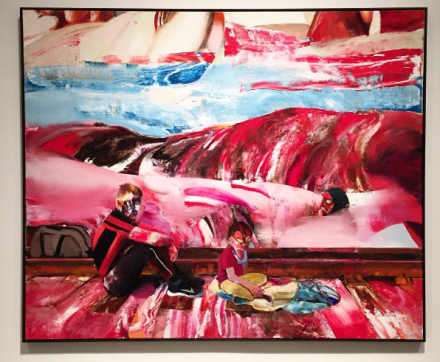 Adrian Ghenie, Rest During the Flight into Egypt (2016), via Art Observed

Drawing on a wide range of works from the artist’s recent practice, Pace Gallery is presenting a series of new paintings by Adrian Ghenie, drawing on the artist’s unique approach to both the construction of his canvases, and the position his work takes in its relation to broader timeline of European painting and political history. 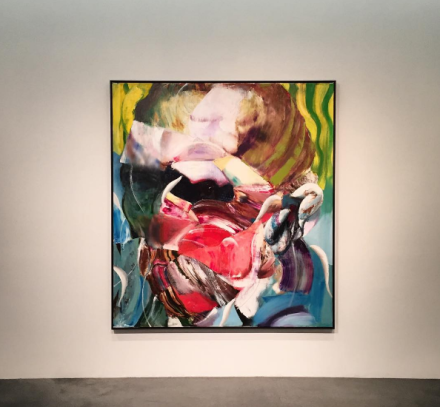 Frequently exploring the fraught landscape of Central Europe’s violent past during the first half of the 20th Century, Ghenie’s work frequently explores the political and human consequences of past eras, often with gory, surreal transpositions of historical figures and Ghenie’s own image on the canvas’s open surface.  Here, however, the artist has expanded his practice into more broadly executed compositions, sweeping landscapes incorporating his honed sense of figuration in conversation with broader landscapes, rendered in scraped and squeegeed expanses of paint that give the works a sweeping sense of movement.  Crossing the Sea of Reeds, for instance draws on contrasts between life-like creatures and loping strokes of color, each united by the swirling energy of the water bounding each form, a gesture that ultimately presents a teetering meditation on the energetic water and an abstract deconstruction of his chosen subject. 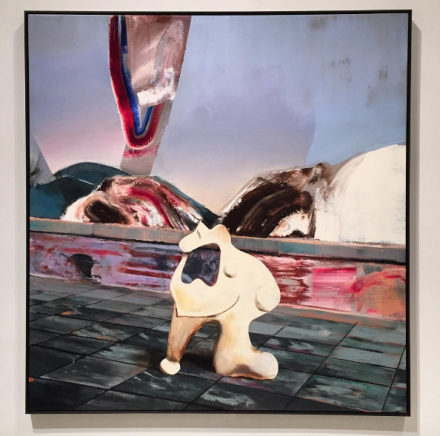 What’s perhaps most interesting in Ghenie’s work here are the broader strokes of political history that he casually subjects to his own interpretive lens.  In one room, the artist’s Degenerate Art warps van Gogh’s iconic self-portrait through the artist’s own fractured approach, twisting the artist’s own expressive approach to portraiture into an even more jagged, stuttering final form that echoes Ghenie’s own self-portraits nearby.  In turn drawing on the history of Nazi suppression of the more formally adventurous works of the 20th Century, Ghenie recasts the broader history of European painting through the same political lens.  His reproduction of van Gogh is overshadowed by an authoritarian force that may well have expunged his work from the annals of art history given the chance, and here takes on a new urgency as Ghenie pushes these threads of the Dutch painter’s own formal subversions into the foreground. 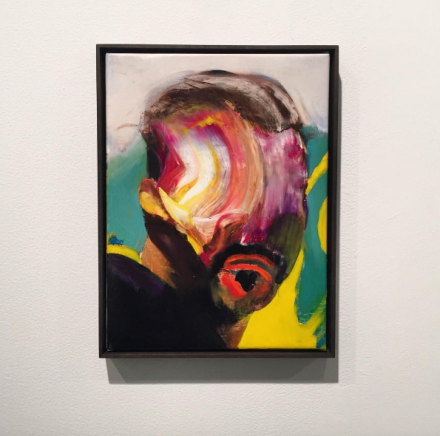 This exploration and repositioning of the subtle subversions and innovations of 20th Century painting and its historical backdrop bubble to the surface across a wide range of works and approaches to his themes.  Rest During Flight Into Egypt, for instance, plays on these same iconographies, producing images of European youth during the war-torn decades of the 30’s and 40’s, while pushing a parallel with the early years of Christ, fleeing with his family to Egypt to escape mass infanticide.  The hills around Ghenie’s figures are soaked in red, hinting at a savage violence in the background of the image, with a shadowy figure lurking just below a cloud of pink dust, offering additional ominous threads to complicate the image.  These are situations suspended between timeframes and concepts, bringing a shared narrative of persecution and desperation, violence and flight, adding a new sense of historical depth to the current political crises of mass refugee flight and genocide in Europe and the Middle East. 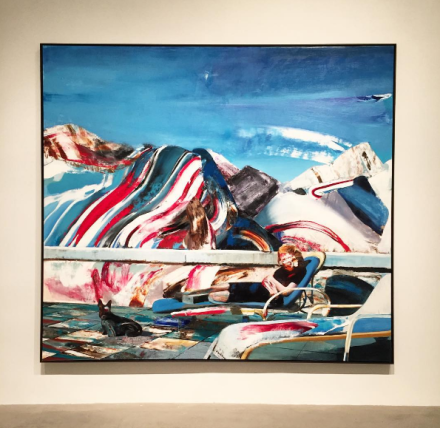 The sense of political context, and the broader narratives of European painterly history that his predecessors so often built their works upon, underscores Ghenie’s masterful exploration of the canvas as a site for the continued exploration, and revelation of these contexts, and contradictions, in the modern world.  As the language of 20th Century painting remains with us today, Ghenie seems to argue, its social and political crises seem to have lingered as well.

His work is on view through February 18th.

This entry was posted on Thursday, February 16th, 2017 at 10:26 am and is filed under Art News, Featured Post, Show. You can follow any responses to this entry through the RSS 2.0 feed. You can leave a response, or trackback from your own site.