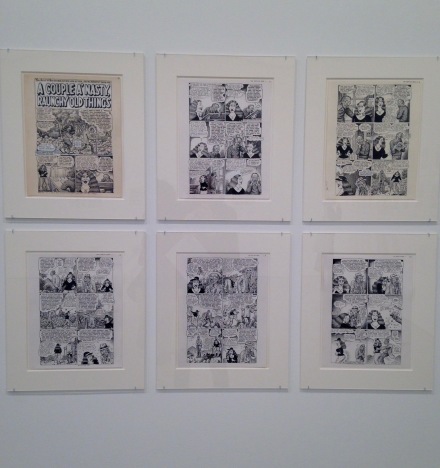 Drawn Together, a decade-spanning look at the collaborative work of the cartoonist husband and wife Aline Kominsky-Crumb and R. Crumb, offers a well-timed opportunity for lovers of the graphic arts at David Zwirner, coinciding with the opening of the New Museum’s Raymond Petitibon retrospective A Pen of All Work.  Although they were individually prominent artists in the graphic arts scene during the course of their careers, Aline and Robert delivered a unique visual and intellectual body of work that both drew on their marriage in the early ‘70s. Later gathered in a series titled Aline and Bob’s Dirty Laundry Comics, which debuted in 1974, the couple’s ongoing collaboration is a statement on marriage, partnership, and dependency, as well as on sexuality and gender roles of the society they lived and worked within. 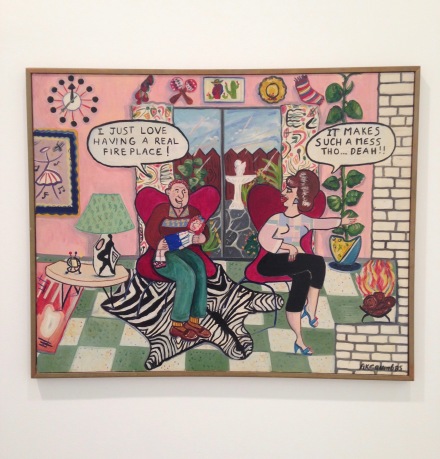 While Aline was rumored to closely resemble a character Bob had created named Honeybunch Kaminski at the time they met, the pair’s employment of their own identities as protagonists in their work bears an unexpectedly personal and introspective tone within the comic genre, and makes for a resonant conversation on view here. The sharp, witty portrayal of their mundane rituals through the lens of both artists’ perceptive senses of humor and their respective acumens for social critique, offers vivid depictions of the human condition with a hearty dose of satire. Their distinct, yet stylistic fashions, and shrewd illustrations of the human form on the other hand, add another layer to their intellectual and artistic finesse. 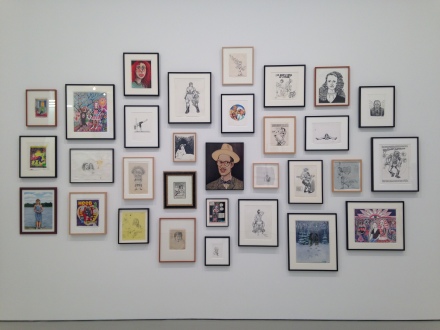 What marks them as groundbreakers in the genre, however, remains their enduring capacity to tackle motifs on sexuality and mental/emotional struggles that placed them at the vanguard of their craft. Brazen expression of sexual desire, alternative marital structures, and even American politics were filtered through each artist’s lens in ways that omit exploitation or agitation while allowing somewhat offbeat renditions of these issues, challenging the viewer’s participation while drawing them ever deeper into the comic’s internal universe. 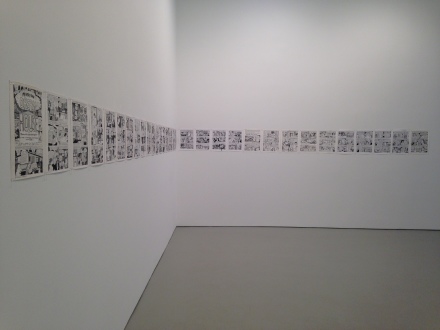 The installation at David Zwirner greets the visitors with a salon-style hanging of some of their most famous characters, themselves included, while various strips of comics dating back as early as the ‘70s invite viewers to pace the length of the gallery as they are drawn deeper into the constructed universes of the pair, made all the more compelling through their amusing wordplay and intricate sketching.  Exhibited inside glass vitrines are also issues from their collaborative work, supplementing the more historic aspects of the show in tracing their ongoing collaboration, all the way back to their first encounter forty years ago, through to their move to the south of France in the ‘90s, and culminating with their recent collaborations with their cartoonist daughter Sophie.  The result is an exhibition as much grounded in their work as in their life, allowing the viewer to dive directly to the heart of their work together, and the dynamic personal relationships that these artists traced across the page, and through each other’s crafts.

Aline Kominsky-Crumb & R. Crumb: Drawn Together is on view at David Zwirner through February 18th, 2017. 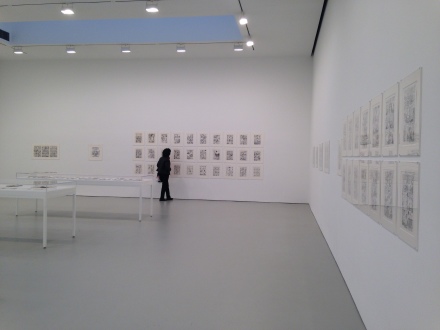 All images by Osman Can Yerebakan for Art Observed.

This entry was posted on Friday, February 17th, 2017 at 12:15 pm and is filed under Art News, Featured Post, Show. You can follow any responses to this entry through the RSS 2.0 feed. You can leave a response, or trackback from your own site.