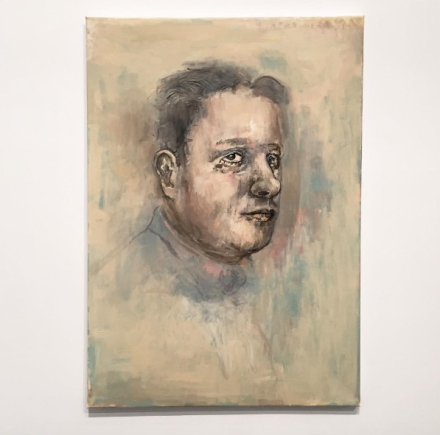 Hannah van Bart’s works serve as particularly intricate visual experiences, often twisting interior and exterior architectural forms around the human body (frequently female), presenting the human figure in a manner that subverts the canvas’s illusions of depth, and the human brain’s understanding of flat surfaces.  Her paintings, presented at Marianne Boesky this month, present themselves as something of a variation on theme as a result, allowing the viewer to trace the artist’s varied explorations of her subjects, and their varied relationships to the world around them. 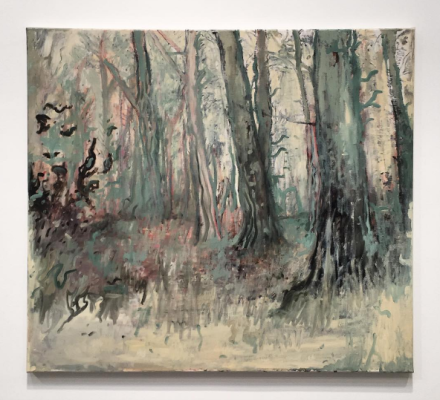 The artist’s interpretation of her figures are peppered with subtle irregularities.  Figures are dotted with patterns akin to the brick walls behind them, often engaged in tandem with the varied historical periods these pieces of clothing make reference to.  Drawing on her own memory in conjunction with imagined spaces and landscapes, her works create a space held almost outside of time itself, and figures that seem to melt into the landscape around them.  This sense of the imagined figure, emerging directly from the artist’s engagement with the canvas, ultimately serves as a trace of van Bart’s own memories and psychology.  Shared forms and familiar faces create a sense of visual motif that works as much on the human body itself as it does on the scenes that van Bart creates. 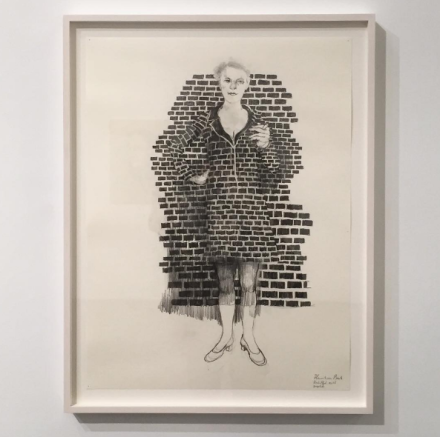 On a similar note, van Bart’s pieces trace the artist’s own acts of personification and identification with her figures.  As the more surreal elements and deconstructions of time and space in her work take hold of the viewer’s attention, more generalized formal decisions push themselves to the foreground.  Gaze, pose and posture lends a timeless sense of personality to her figures, and challenges the viewer to find shared ground with these figures.  Moving beyond time, beyond the often constructed conceptions of the past, van Bart allows a new sense of identification with her figures, one that allows her to explore more timeless sensations of the human experience, while tying them to a range of experiences and cultures not shared by her viewers.  These are exercises in empathy, images that seek to locate a shared humanity beyond material and physical boundaries.

Alongside her paintings, van Bart has also selected a series of graphite drawings, each delving into the artist’s chosen techniques through more focused studies on the body.  Brick walls wrap around the human form, often in a tighter arrangement than her paintings, speaking both to the precise capabilities of her chosen medium here, and, by extension, the impact that the act of depiction ultimately leaves on the final piece.

Sharing gestures, clothing items and other physical elements, van Bart’s exercises in figuration are a potent entry in the artist’s career.  Her work is on view through February 4th. 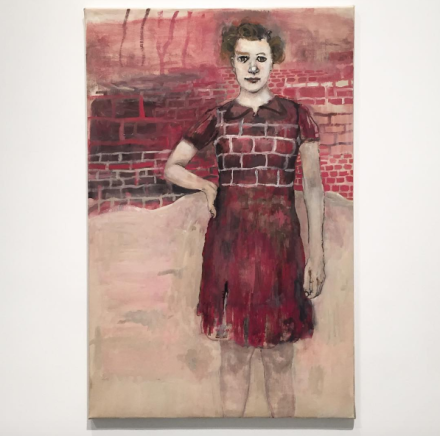 This entry was posted on Wednesday, February 1st, 2017 at 11:55 am and is filed under Art News, Featured Post, Show. You can follow any responses to this entry through the RSS 2.0 feed. You can leave a response, or trackback from your own site.