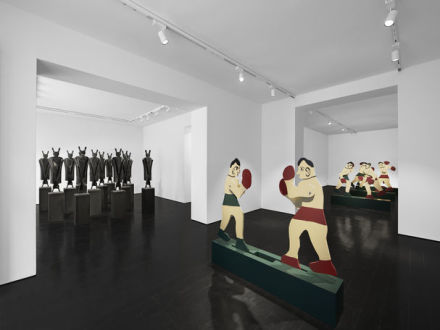 Now through April 22, the Contemporary Fine Arts Gallery in Berlin presents Fat City, a show of works by New York-based artist Marianne Vitale.  For her second exhibition at CFA, Vitale has constructed a series of sculptures that reflect critically and ironically upon American identity, industry, and the concept of the American Dream.  The title of the exhibition takes its name from a 1969 Leonard Gardner novel, in which the protagonist, an alcoholic and semi-retired boxer, drifts down the streets of Stockton, California encountering the melancholy sights of American progress along the way.  In Vitale’s work, symbols of a particularly nostalgic America (such as boxing and steel) appear in the gallery, and speak to the fictional, narrative quality of this national identity. 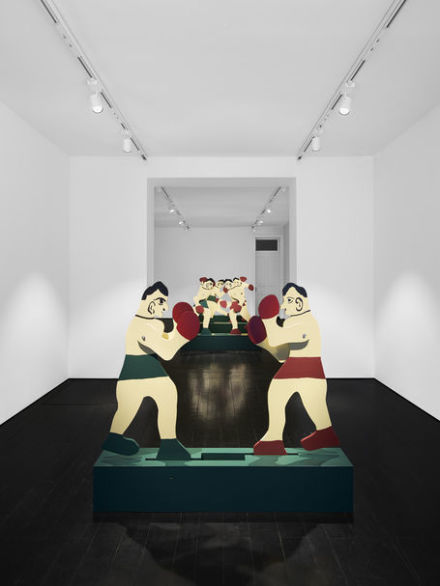 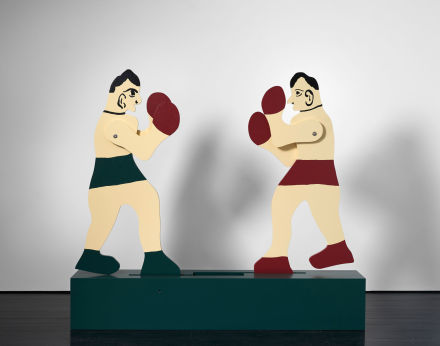 The exhibition includes a collection of painted wooden Boxers, works modeled off an antique handheld American toy that depicts athletes ready to square off in the ring.  The antiquated, nostalgic appearance of these figures comes across clearly, and, to many viewers, draws on the narrative arc of the boxing film, beginning with an unlikely hero and culminating with a cathartic and victorious final knock out.  Fat City plays with this familiar pattern of adversity and triumph throughout, attaching itself to the boxing narrative, and the concept of personal struggle as the means to success, as part of the American Dream.  Instead of a dynamic and satisfying finish, however, the repetition of wooden painted boxer figures, arranged to reflect the chronological development of a boxing match, highlights the dull repetitive monotony and cultural degeneration that lurks behind the glamorous iconography of the violent sport and its varied cultural tropes. 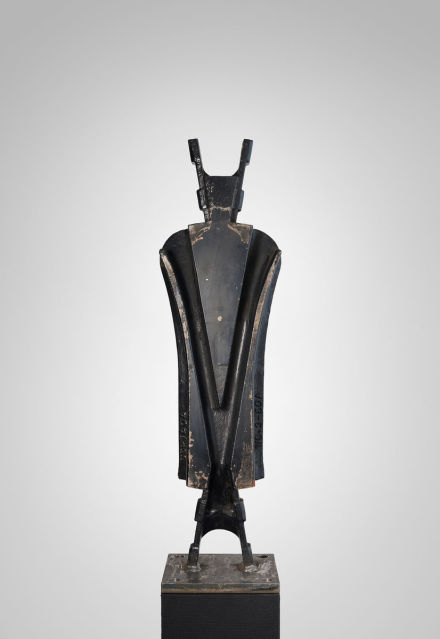 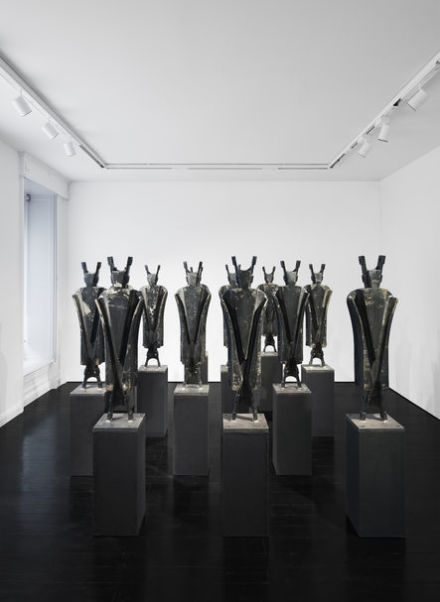 This exhibition also includes a series of steel figures, which also play with the themes of repetition and an outdated sense of American identity.  Much like Vitale’s previous series, Worthies (2014), her new Common Crossings pieces repurposes remnants from the American railroad system, steel implements turned into sculptural figures that speak to the bygone era of a booming steel industry in the United States, and, as the press releases notes, “an industrial past that fueled an American exceptionalism.” The imposing, severe form of these structures lends a melancholy aspect to this portrayal, as though the figures stand in a state of exhausted mourning.

Considering the show as a whole, both series mobilize a sense of nostalgia to emphasize the inevitable decay and disuse of raw material, narratives, and objects over time, emphasizing how constructs of identity and awareness may shift and mutate as concepts and images fall out of circulation.  Fat City stages a commentary on the contemporary moment by framing the materials and narratives of the past as an abstracted, alienated reality, one that seems to multiply and change in meaning and as it loses relevance.  Vitale’s work conjures outdated suggestions of American prosperity, pointing the role that fiction and fetishism play in this construction of identity and nostalgia.

Her work is on view through April 22nd.

This entry was posted on Monday, April 17th, 2017 at 11:06 am and is filed under Art News, Featured Post, Show. You can follow any responses to this entry through the RSS 2.0 feed. You can leave a response, or trackback from your own site.