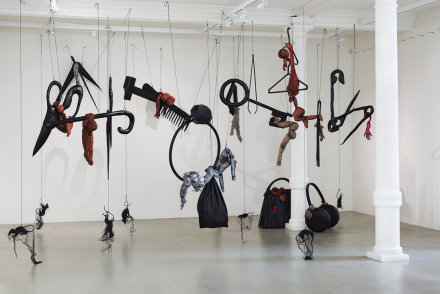 On now through May 27th, avec et sans raisons by Annette Messager is on view at the Marian Goodman Gallery in London, comprising Messager’s first solo show at the gallery and first exhibition in London since 2009.  The title of the exhibition reveals the 73-year-old artist’s penchant for wordplay, suggesting both a possession or lack in the faculty of reason, as well as the existence and/or deficiency of motivation. Following through with the suggestion of its title, the exhibition contains works that possess a clear rationality while simultaneously toying with concepts of the absurd. 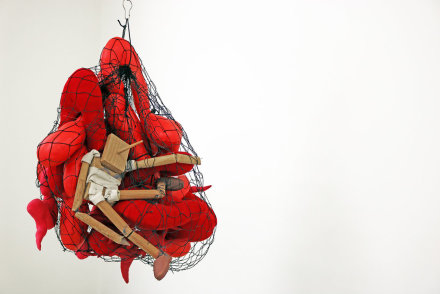 Messager’s unusual associations of objects and her dark sense of humor runs throughout much of the exhibition, with many of her compositions drawing on surrealist approaches to politically-motivated and often quite intimate questions of identity. I n 3 Escargots-sein (3 Snails-breast), breasts shaped like snail shells evoke the surrealist history of collisions between the human, the mechanical, and the animal. Humor and whimsy play a central role as well, as in the case of En trottinette (On my Scooter), Le Bras chaussure (The Arm Shoe), and En équilibre (In Balance). An infant’s arm emerges from a child’s shoe and a carbonized Barbie doll balances precariously with both legs in the air, leaving the viewer with a distinct sense of Messager’s sharp wit, and her sense of subtle subversive use of sexual energy and the human body as messenger. 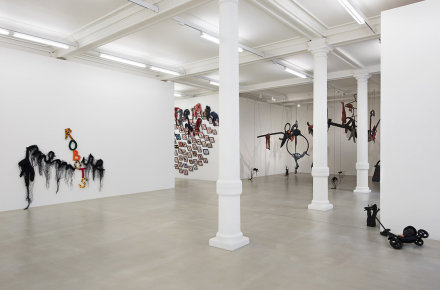 In addition to its humor and absurdity, this exhibition considers deeply philosophical questions of the soul and of the self.  Pascal’s investigation of ‘geometric’ versus ‘intuitive’ minds, as well as the extent to which the human and the mechanical are distinguishable, come into play in many works.  Mémoire Robots, for example, poses the words “memory” and “robots” in metal wire, covered with thick black netting that underscores visual dissonance against the in softly colored letters. 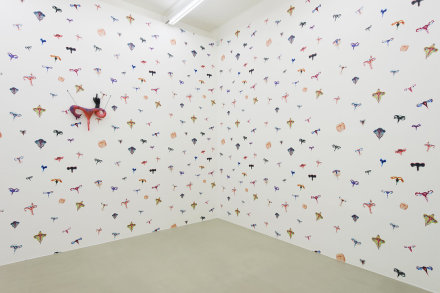 Multiple subjects make an appearance in avec et sans raison, but the most glaringly obvious of those are the concepts of reason, gender, and reality. The figure of the mask is employed in La Chaussure a double visage (The Two-faced Shoe), for example, to highlight the unsteady line between fiction and reality, especially when dealing with questions of identity.  Messager’s latest drawings cultivate the power and jubilation of subjective emancipation through an appealing mix of humor and anger.  The female anatomy, rendered using acrylic wash, becomes an anchor in these drawings. Especially effective and memorable is To My Desire, which features the image of a uterus twisting one of its tubes into a middle finger, brashly flipping off the viewer. Uteruses and breasts, depicted in flowery colors and patterns, abound, drawings which smack of a refreshing and blatant impatience with society’s stubbornly slow progress on issues of gender equality. 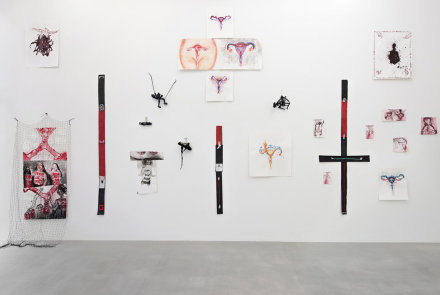 Avec et sans raisons is a playful yet frustrated picture of Annette Messager’s latest work. The exhibition overwhelms, instigates, and tickles the viewer into surrendering her power of reason to the absurdity that surrounds us.  The show closes May 27th.

This entry was posted on Friday, May 26th, 2017 at 6:20 pm and is filed under Art News, Featured Post, Show. You can follow any responses to this entry through the RSS 2.0 feed. You can leave a response, or trackback from your own site.