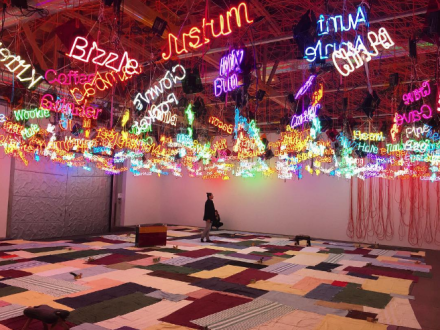 Jason Rhoades, My Madinah. In pursuit of my ermitage… (2004), via Art Observed

Exploring a range of works from the career of Jason Rhoades, Hauser & Wirth Los Angeles has assembled a challenging exhibition for its spring calendar, one that feels particularly resonant in the tense geopolitical situations of 2017.  Installations, 1994-2006, drives at Rhoades’s shared language of consumption and mythology, space and commerce, as a fertile site for the investigation of the modern world, and the cultural collisions stemming from its increasing interconnectivity. 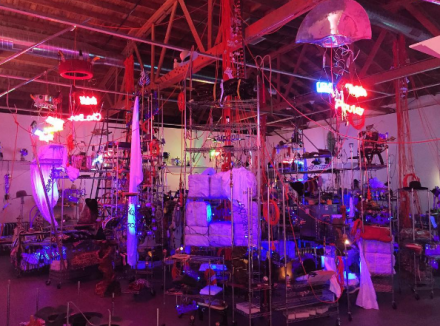 Jason Rhoades, The Black Pussy… and the Pagan Idol Workshop (2005), via Art Observed

Rhoades’s work in the exhibition runs the gamut of his creative output, always centering on the madcap and messy.  His pieces are clutters and agglomerations, swelling masses of objects including neon lights, tourist tchotchkes, beads, and other detritus that hangs or pools around his larger structures.  “Brazenly maximalist,” as the exhibition’s press release describe his work, is no exaggeration, particularly in consideration of the often risqué subject matter and linguistic material used.  Frequent allusions to the female anatomy pop up throughout the show, tinging the artist’s work with a certain sense of human desire that mingles with his chosen iconographies.  My Madinah. In pursuit of my ermitage… for instance, recasts the imagery of an Islamic prayer site as a swirling space of human drives, spiritual passion mixed with lowbrow signifiers. 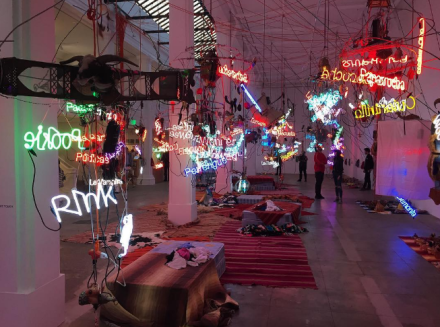 Elsewhere, Rhoades’s work interrogates similar constructs in less direct manners.  Swedish Erotica and Fiero Parts, for instance (which constituted the artist’s first solo exhibition in Los Angeles), clusters countless replicas of furniture into the gallery space in a maze of consumer objects.  Rather than push his works too directly into the space of sexual desire here, Rhoades’s work examines the object as an erotic symbol, a piece to be considered, appreciated and acquired in a similar manner of incorporation.  His structure takes on an orgiastic atmosphere of rote consumption and accumulation, the act of browsing and selecting turned from an economic necessity into a fetishized and comically grandiose spectacle.  A similar thread traces itself through Rhoades’s My Brother/Brancuzi reflects conjunctions of the banal in the connections between the home of the artist’s brother and the studio of Constantin Brancusi, unifying the spaces through a shared selection of domestic objects tuned through the imagery of the modernist project.  Of particular note is a tower of donuts inside the installation, alluding to Brancusi’s Endless Column works, pushing banal elements through the scope of Brancusi’s work. 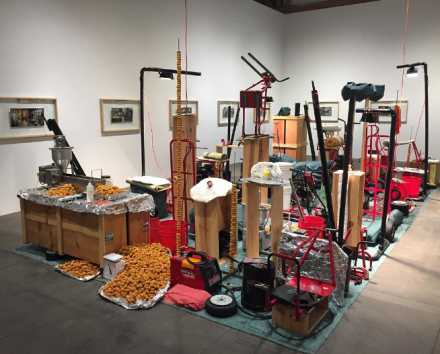 The exhibition continues tracing Rhoades’s work in its evolution towards the spiritual and the Freudian in increasingly vivid turns, consumer goods continuing to mine the space between the sacred and profane.  Offered as the final work in the show, the artist’s Tijuanatanjierchandelier works at the increasingly objectified locales of border towns like Tangiers, Morocco or Tijuana, Mexico, where cultural iconographies and sacred spaces are frequently ruptured by tourist economies and the often exaggerated cultural imagery that they encourage.  Presented as a cluster of goods and symbols, Rhoades’s work transposes the act of pilgrimage and exploration through the lens of modern capitalism, placing the act of searching as one perverted and diluted by the stereotypical language of modern consumption.  For Rhoades, these acts of futility seem to serve as a site for reflection and consideration, a way of both understanding the longstanding mythologies of Western man, and the distortions in these tropes caused by the landscape of modernity.

Rhoades’s work is on view through May 21st. 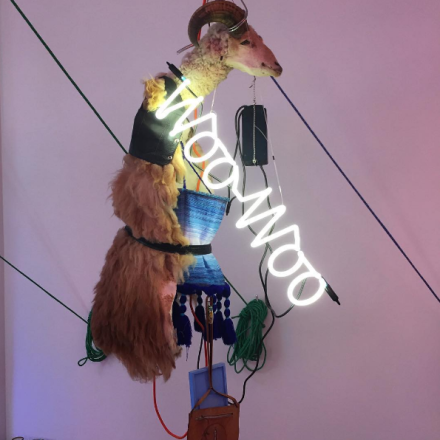 This entry was posted on Friday, May 19th, 2017 at 5:01 pm and is filed under Art News, Featured Post, Show. You can follow any responses to this entry through the RSS 2.0 feed. You can leave a response, or trackback from your own site.