Currently on view at Lehmann Maupin’s Chelsea exhibition space, Austrian artist Erwin Wurm is presenting a concise summary of his recent work, installing a range of sculptures in his broad practice that explore the act of both participation and subversion in the landscape of modernity.  Including both quasi-participatory work alongside a series of more static pieces, the show allows Wurm to run through an impressive range of both his practice, and his broader critical project. 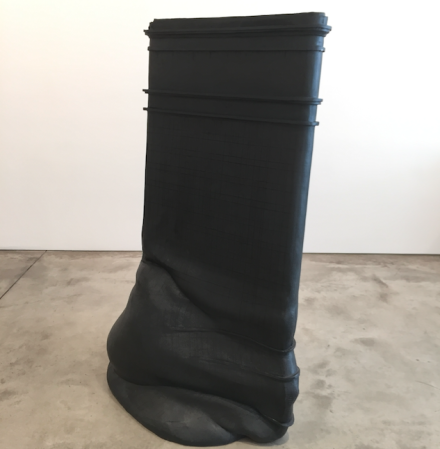 The show runs through a familiar body of works for Wurm, dwelling on a number of the artist’s interpretations of consumer objects, furniture, and even the human body.  His iconic works distorting proportions and scale are presented alongside a series of his One Minute Sculptures, presented here as a series of deconstructed or misshapen furniture, pock-marked with holes and clear alterations allowing viewers to place their heads through the object.  In one piece, Head TV, the viewer is welcome to plunge their head into a Danish cabinet, standing like an ostrich with its head buried in the ground.  Elsewhere, his sculptures take on a more complete initial presentation, with body parts and iconic buildings presented in swollen, repetitive or distended forms that create a sense of shifting, surreal distance from its real-world equivalent. 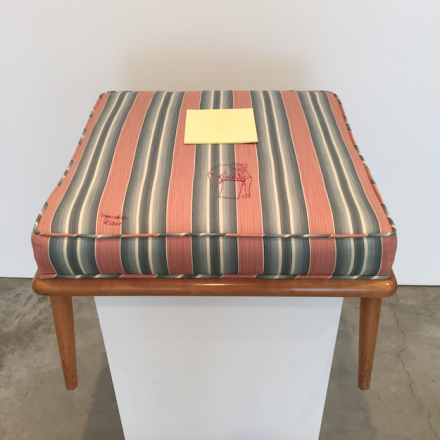 Wurm’s particular sense of physicality, and its engagement with the objects themselves, underscores a distinct understanding, and subversion of, the subtle prompts directed towards the human form by their inherent structural arrangements.  Yet rather than merely explore these connections in direct terms, Wurm smashes through their structural logic with a hearty dose of the surreal, breaking holes through walls and countertops to make room for the human form itself.  His pieces are as much a visual joke, a human embedded in the midst of a chair, for instance, as they are subtle plays on the logic of the body itself, extending the experience of subverting orthodox physical behavior in favor of moments of linguistic breakdown. 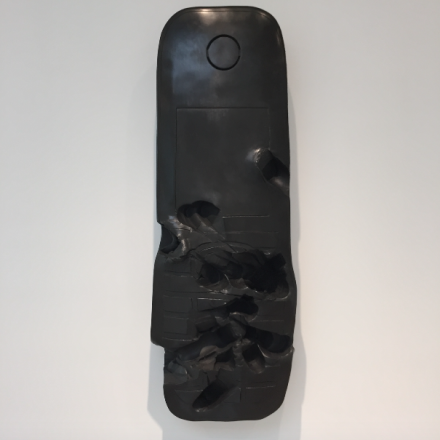 This ethos takes on a range of forms throughout the show, but never loses site of the playful subversion of an object’s value as both a symbol of commodity culture, and an image in its own right.  This is perhaps best seen in one corner, where the artist’s Phone shows a large-scale version of a cell phone bearing the marks of repeated kicks and scuffs of his foot.  The violent actions, left as gouges and traces of violence across the piece, are unnerving in a certain sense, but equally play on Wurm’s flippant destruction of such a prominent technological symbol. 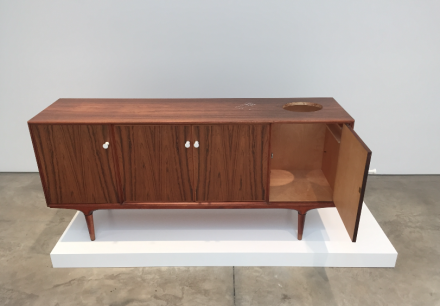 Taken as a whole, the show offers a rather cunning critique of modern consumer culture, drawing on his subject’s value as utilitarian object, fetishistic design piece, or even historical signifier, and twisting that into a dizzying moment of surreal deconstruction.  Wurm offers momentary liberation from a universe of commodities, one where the playful engagement with his work offers a space for deconstruction, reflection, and an occasional chuckle.

The show is on view through May 26th.

This entry was posted on Tuesday, May 23rd, 2017 at 6:44 pm and is filed under Art News, Featured Post, Show. You can follow any responses to this entry through the RSS 2.0 feed. You can leave a response, or trackback from your own site.