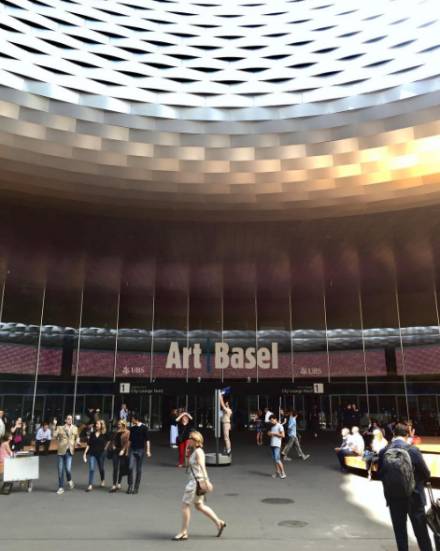 The 48th edition of Art Basel opened its doors today for the first official day of its week-long run in the Swiss city, and capped its VIP preview with an impressive array of sales that underscored the fair’s lynchpin position in the summer market calendar.  Attendees poured into the halls of Messe Basel early this morning, jockeying for position and a first crack at the exhibition’s premier works, and bringing down a rain of early sales that indicated a return to form for a Western market that had struggled in the past year.  The hallways were packed for the opening day, with collectors Peter Brant, Don and Mera Rubell, and Uli Sigg rubbing elbows with Beatrix Ruff, Hans Ulrich Obrist, Phyllida Barlow and Wolfgang Tillmans. 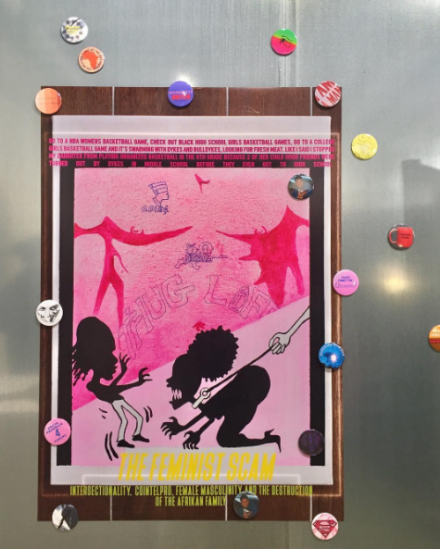 This rush of guests caused an equally strong rush to buy, with many galleries reporting remarkable early figures.  At Mnuchin Gallery, Mark Bradford’s Smear sold quickly, garnering a price of $5.5 million, capitalizing on the artist’s impressive Venice Biennale pavilion this summer, while Pace Gallery sold an impressive range of historical works by Robert Rauschenberg and Sol LeWitt for $1 million and $750,000, respectively.  Hauser & Wirth also had a particularly buoyant first day in Basel, selling a deep selection of works by Philip Guston, including the artist’s iconic Scared Stiff, which sold in the early hours of the fair for around $15 million.  The gallery also sold an untitled Richard Serra work for $2.5 million.  The gallery was also presenting a monumental Jason Rhoades sculpture, Sutter’s Mill at the fair’s Unlimited section, a hulking cluster of steel pipes, wooden platforms and rope that seemed to pull the viewer’s eye in every direction at once. 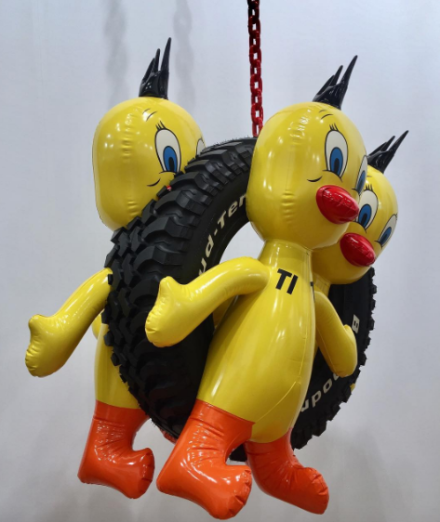 Elsewhere in the Unlimited section, artist Matias Faldbakken was reprising his Europe is Balding series, exhibiting a massive entertainment center coated in white tile, while Rob Pruitt had also reprised a popular body of work, his Art World/Celebrity Look-Alikes, a hysterical send-up of the power and prestige of the fair’s opening hours.  Posing various artists, dealers and collectors next to a range of pop culture icons (in one, Alex Katz is posed next to a picture of Squidward Tentacles from the Spongebob Squarepants cartoon), the work elicited a stream of chuckling, giggling crowds all day. 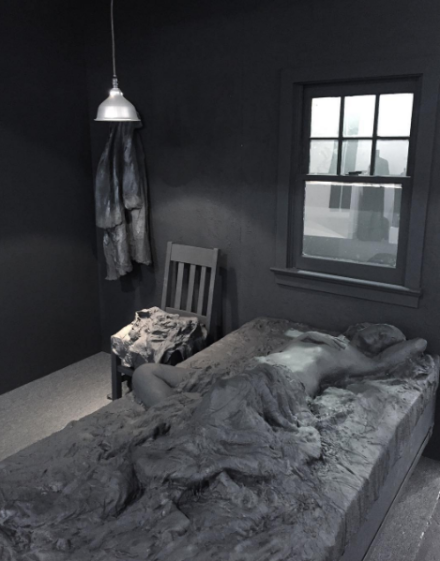 Also of note was the final work produced by Chris Burden, his immense floating sculpture, Ode to Santos-Dumont, which commemorated the floating dirigible pilot’s orbit of the  Eiffel Tower.  Presented by Gagosian, the work was a fitting last farewell to an artist who constantly pushed the limits of physical space and conceptual rigor, particularly in the cavernous expanses of Messe Basel.

Gagosian Gallery was also hosting an impressive range of works in its booth, including its usual attention-grabbing Jeff Koons works, this time the artist’s Titi Tire (2003-2010), which clustered a series of what appeared to be Tweety Bird inflatables clustered around hanging tires, a work which found a strikingly subdued counterpoint from Urs Fischer’s Couple, a play on the artist’s impressive wax candle works that posed an elderly couple locked into a gentle, intimate pose.  White Cube was also drawing a crowd, as a 2008 Damien Hirst sculpture, Cupid’s Lie, posed a fetal skeleton in gold plating, complete wth miniature wings.  Reena Spaulings was also on hand, marking a continuation of its work with Juliana Huxtable that placed a new series of assemblages on the walls of its booth.  At Xavier Hufkens, the gallery was presenting a range of works, including a massive sculpture, Captain Dickhead, by Paul McCarthy, completed after more than eight years, while at Marianne Boesky, the gallery was presenting works by Sanford Biggers and Maria Lai, fresh off her opening at Documenta 14.

The fair’s early sales figures and impressive crowds should result in more strong sales and equally strong attendance in the coming days.  The fair closes on Sunday, June 18th. 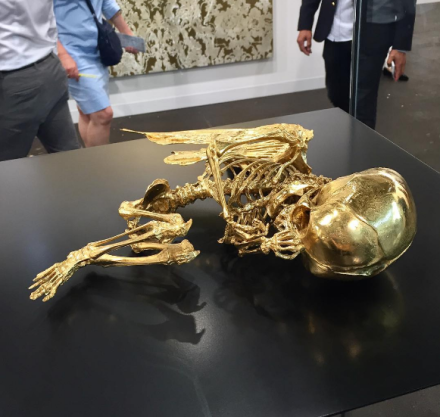 This entry was posted on Tuesday, June 13th, 2017 at 7:42 pm and is filed under AO On Site, Art News, Featured Post, Show. You can follow any responses to this entry through the RSS 2.0 feed. You can leave a response, or trackback from your own site.