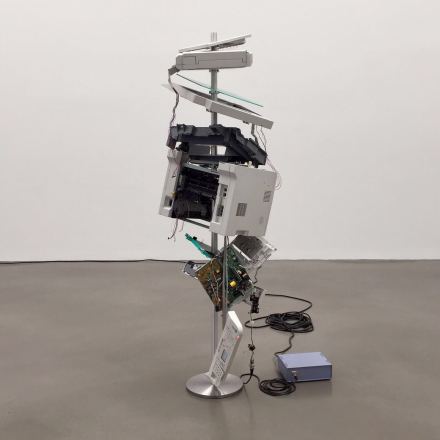 Artist Walead Beshty’s work has frequently mined the language and situations of modern labor as productive systems for rendering his works in the gallery space.  There are his postal works, for instance, which use the often rough delivery methods of varied delivery companies to create shattered, misshapen sculptures produced through the route’s inherent inefficiencies; or his works from the last show at Petzel Gallery in New York, which used the movements of gallery employees on a copper table top to create swirling patterns emphasizing the movements and gestures of modern office work.  For the artist’s most recent exhibition at Petzel, this interest in production and systems returns, running through a broad body of works that underscores his intuitive use of simple gestures and deft manipulations to create his pieces. 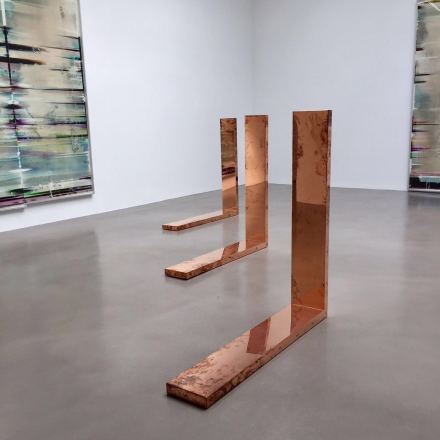 The exhibition draws on a number of aleatoric principles to create the artist’s work in the gallery space.  In one series of photograms, Beshty has rendered a series of prints through repeated double exposures to light, drips of material and other gestural processes to create pieces vaguely reminiscent of painted canvases, particularly the stark subtractive abstractions of Gerhard Richter.  Taking a similar approach to process in the artist’s relentless manipulation of materials through simple gestures, the works imply a conversation with materials, allowing their inherent properties to create dense movements and blurs of color on each surface. 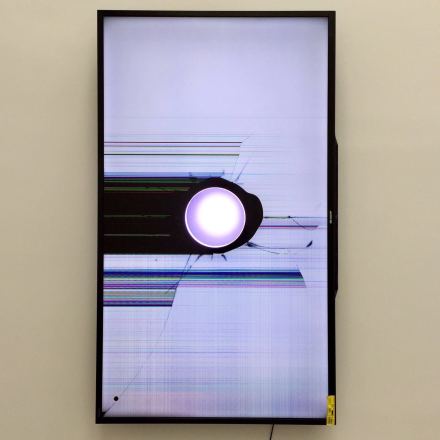 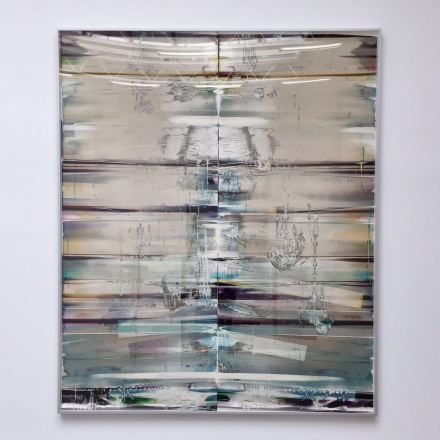 Elsewhere, the artist’s Office Works take a similar deconstructive approach to rote office machines, skewering their bodies on a pole running through the center of the work.  Glowing and flickering screens, damaged in the production of the work, are left on, adding an additional compositional element and series of visual elements that draw their often entrancing patterns and lines from the technical construction of the appliance, and the brute force used in its destruction.  In one work, Sharp LC-90LE657U 90-inch Aquos HD 1080p 120Hz 3D Smart LED TV, the broken implements ultimately cast a glowing aura around the work, tracing broader spatial interactions derived from the same sense of violence. 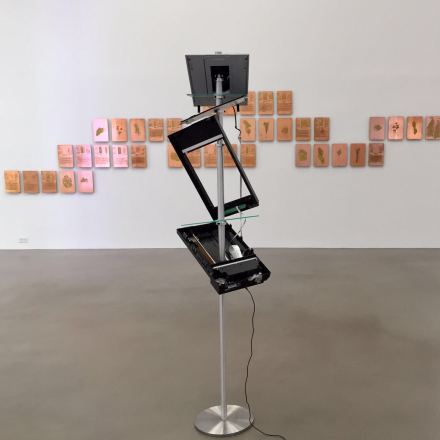 The artist is also showing a series of new copper works around the gallery space.  One, titled Copper Surrogate (60” x 120” 48 ounce C11000 Copper Alloy, 90o Bend, 60” Bisection/5 Sections: April 12–17, 2017/DEINSTALL*, New York, New York), bears traces of its installation, which is performed without gloves.  The result is a piece covered in tarnish from where the artist’s hands make contact with the object itself, and where the acts of labor behind the installation of the piece are suddenly hurled to the foreground. 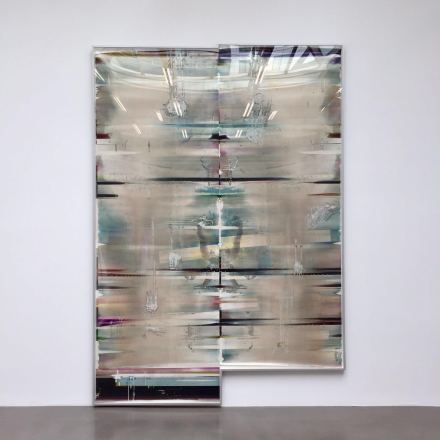 “In general, I think life is a negotiation with such limits. Improvisation within restriction,” Beshty writes of his work.  This perspective is particularly telling.  Allowing his pieces and materials a certain degree of agency in their resistance or response to the force of the work’s construction, Beshty brings a broader awareness of the systems producing the work into view.

The exhibition is on view through June 17th.

This entry was posted on Sunday, June 11th, 2017 at 1:06 pm and is filed under Art News, Featured Post, Show. You can follow any responses to this entry through the RSS 2.0 feed. You can leave a response, or trackback from your own site.