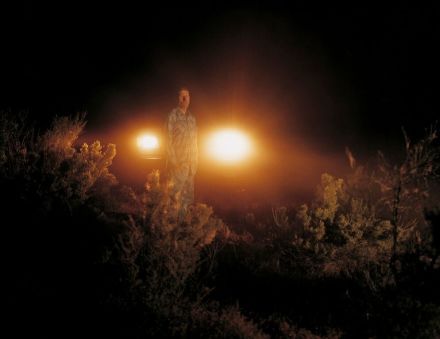 Since Taryn Simon first delivered her seminal The Innocents series in 2002, the New York-based artist’s work has continued to revisit and re-examine the concepts of power, identity and their interrelated social effects, examining how varied political conditions render real human effects on the body, and on space.  This summer, East Hampton’s historic art and culture center, The Guild Hall re-contextualizes Simon’s compelling photography series about misconceptions of guilt and impossibility of rewinding time on its 15th anniversary, serving as a backdrop for ongoing discussions around prejudice, injustice, and empathy. Organized by Guild Hall Chief Curator Christina Mossaides Strassfield, the exhibition reiterates a selection of photographs and video from the overall series that had its debut at MoMA PS1 in 2003. 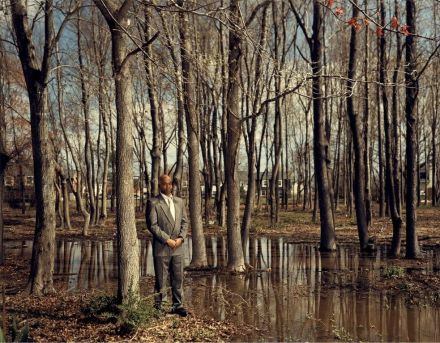 The Innocents emerged from an assignment Simon was given by The New York Times in 2000, asked to photograph individuals wrongfully convicted for crimes they never committed, in locations of their arrest, crime or alibi. Then a recent Brown University graduate photographer working in the commercial field, Simon faced the immense potential of the photographic medium as both a narrative and rhetorical mode. Hearing stories of men and women whose lives were irreversibly devastated by misjudgment and prejudice prompted the artist to showcase how much investigators rely on photographic evidence en route to their final judgment. Given the fact that misidentification remained the primary reason that sent innocent people behind bars for decades in many cases, photography could play crucial role in someone’s life—at levels that can be devastating and irreparable. In many cases, when photos of a people—guilty or innocent—were brought up, victims and witnesses had pointed the most similar person to the image in their head. Later, as a John Simon Guggenheim Foundation Fellow in Photography, she continued this prior work, traveling across the United States to embark on a broader investigation of the subject that allowed the artist to analyze photography from a conceptually inquisitive spectrum, challenging the potential of inaccuracy and deceit inherent in a medium so often associated with the documentation and presentation of absolute truth. 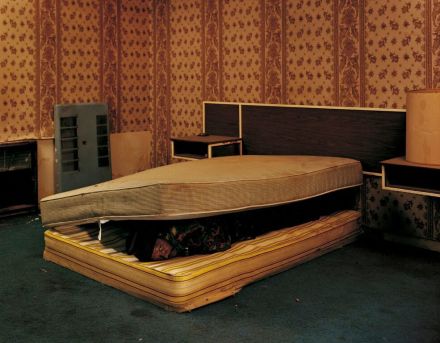 Making this installment particularly timely is the series’ conduct of race, putting emphasis on racial profiling not only as a crucial socio-political issue, but also an inhumane reality with catastrophic results, particularly in the wake of recent police killings of black Americans, usually with little to no repercussions. A large portion of the subjects in the series are African-American, most of whom were accused by white individuals with little interest in distinguishing two individuals of the same race even under life-changing circumstances. In one of the most impactful photographs on view, Larry Mayes, who served for 18.5 years in prison for offenses of rape, robbery and unlawful deviate conduct, stares at the camera hiding under a mattress in a hotel room in Gary, Indiana, reenacting the same posture the police found him at the same hotel room prior to his imprisonment. 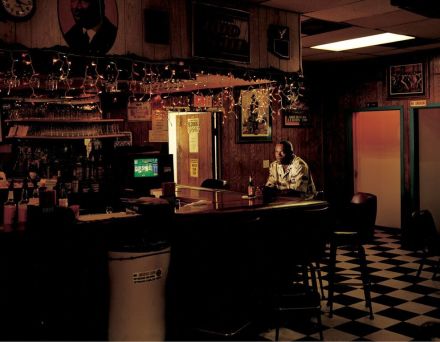 This earlier body of work remains important for Simon’s trajectory, signaling her meticulously-handled, research-based works, in which invisible networks of power and perception surface in profound ways. For her 2016 Gagosian Gallery exhibition Paperwork and the Will of Capital, for instance, she had researched different types of flowers sitting atop tables where world-changing international agreements were sealed; for An Occupation of Loss, her Park Armory project last year, she tackled invisibility and international immigration rights with professional mourners she brought to the United States from different parts of the globe under performing artist visas, showing how border restrictions and political agency clash with the act of expression and bodily presence.

Taryn Simon: The Innocents is on view at Guild Hall through July 30, 2017.

This entry was posted on Saturday, July 29th, 2017 at 12:06 pm and is filed under Art News, Featured Post, Show. You can follow any responses to this entry through the RSS 2.0 feed. You can leave a response, or trackback from your own site.