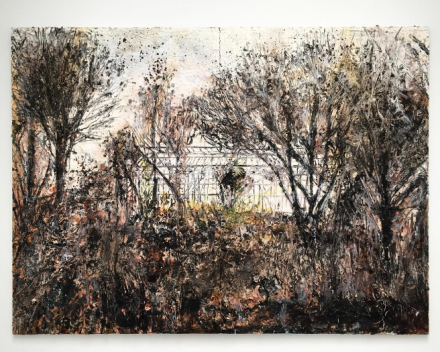 Artist Anselm Kiefer returns to New York this month, bringing with him a dense and wide-ranging body of oil paintings, books, watercolors and assemblages to the expansive halls of Gagosian’s Chelsea exhibition space.  Marking a continued engagement with the process and materiality of painting, rather than a direct engagement with a selected end subject or image, the artist’s works here reflect his continued interest in the alchemical potentials for painting, and the broad vocabulary he has developed over the course of his career. 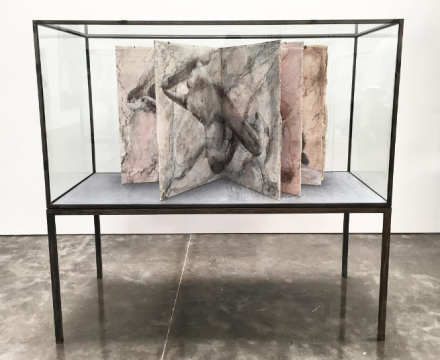 The show, titled Transition from Cool to Warm, does indeed mark a series of colorful, atmospheric transformations and movements over the course of the exhibition, often drawing on direct contrasts between the artist’s flowing, lyrical hand, and the surfaces over which he paints.  Unlike many of Kiefer’s works, which rely on a subdued, even stark color palette of deep grays and whites in contrast sudden flashes of color, these works are flush in deep reds and blues.  Throughout, the artist returns frequently to the evening sky, drawing on deep tones that see Kiefer making the most of the capacities of watercolor to bleed and blur into swirls and whorls of color.  In others, text mixes with aggressive smears over the surface of the paper that create bulging forms, contrasted with human bodies and other imagery to create otherworldly inquiries of the modern world, and the subjective agents moving through it. 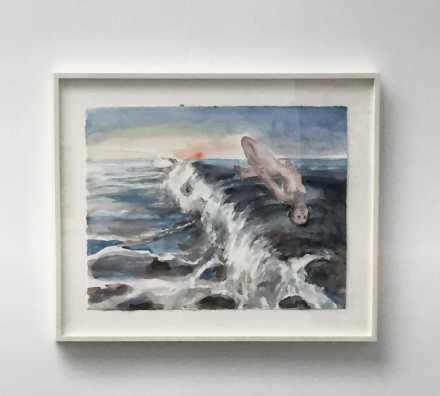 In the artist’s painted canvases, Kiefer instead embraces thick impasto as his method of choice, using his signature approach to the natural landscape as a ground, and plastering its surface with thick stabs of oil paints, often smearing large gobs of paint together in a manner that animates the scene with a sense of distended, vivid action.  Elsewhere, this deep layering complements subtle action, like in one work where a dark cloud of smoke rises from the other side of a swamp.  Surging off the surface of the piece, the artist’s use of these same thick layers of paint almost separate the smoke from the painting itself, giving the work a sensation of a three-dimensional space, an interest echoed in a number of works with inclusions of metal grids, snake sculptures and books. 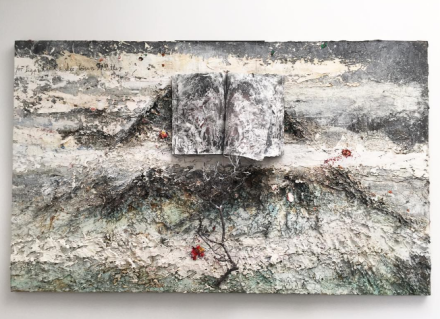 The show makes much of the artist’s embrace of the painting’s surface, not merely as a receiver of paint, but equally of a space for chemical transition and transformation in its own right.  In one particularly powerful work, The Waves of Sea and Love, the artist mixes thick coats of oil, emulsion and lead into curving arcs of material, jagged gashes and swells of material that lend the work a powerful sense of motion that equally recalls processes of decay and degeneration in both industrial materials and the natural landscape.  For Kiefer, his canvases are a space for these processes to both mirror these processes and create them anew. 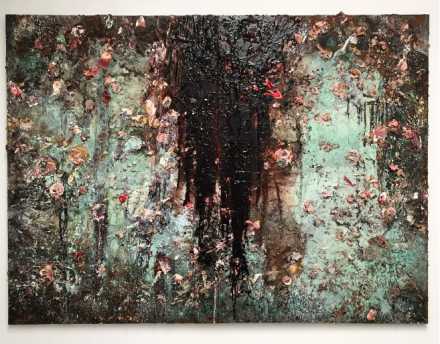 The show also features a series of the artist’s ongoing engagement with the book as a site for the continuation of his painterly practice.  With figures and abstract imagery snaking across the pages and spines of each piece, the works are a strong complement to the single pieces hung around them, transitioning his techniques to a medium that presents a nuanced understanding of the progression of the book’s pages, and counters it with shifting, evolving forms that give new life to his already honed formal vision.

The artist’s work is on view through July 14th. 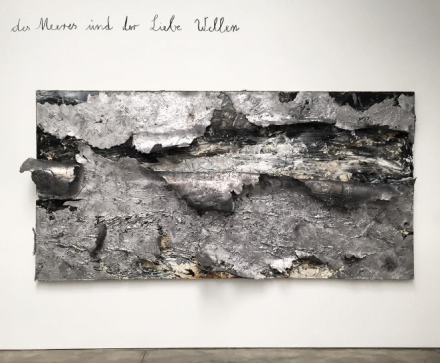 Anselm Kiefer, The Waves of Sea and Love (2016), via Art Observed

This entry was posted on Wednesday, July 5th, 2017 at 4:58 pm and is filed under Art News, Featured Post, Show. You can follow any responses to this entry through the RSS 2.0 feed. You can leave a response, or trackback from your own site.