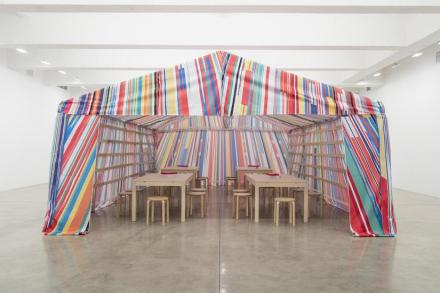 Working between Benin and the Netherlands during the course of the past 20 years, artist Meschac Gaba has forged a unique language for addressing and visualizing the varied effects and themes both driving and stemming from the rapid pace of globalization.  Utilizing a playful approach to environmental installation and sculpture, Gaba’s work frequently presents spaces and scenes drawing from the marketplace and the museum, the refugee camp or the modern office.  For his current solo exhibition at Tanya Bonakdar Gallery in New York, Gaba has installed his Reflection Room Tent piece, opening a space for dialogue and engagement between visitors inside the gallery space. 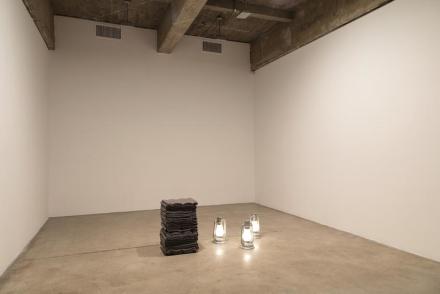 Spreading its massive folds over the main exhibition room at the Chelsea exhibition space, the Reflection Room Tent features a range of colored pencils, paper and open tables, encouraging visitors to stop and enjoy a moment of unexpected interaction and improvisation, drawing and chatting in shared space, and hanging their works up within the tent for public view. First realized at Museum Ludwig’s 40th Anniversary group exhibition, “We Call It Ludwig” in Cologne, the work is an exercise in a remembered state of childhood, one marked by open social interactions and exchanges, always grounded by unfettered sites of creativity.  Here, united under a pattern drawing from the color palettes of the world’s many flags, Gaba’s work seems to echo a utopian premise built on a shared state of creative expression. 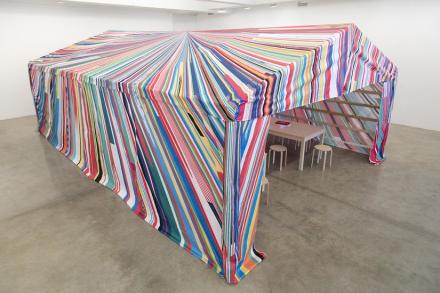 Upstairs, however, Gaba’s work takes on a decidedly darker tone, particularly with his piece Memoriale aux Refugies Noyees (Memorial for Drowned Refugees). A lone tower of felt blankets, and a trio of lanterns stand i the middle of the room, used in West Africa to both commemorate those lost at sea, and to help the lost spirit of the drowned victim to find guidance and warmth in the afterlife. Posed here as a broader ode to those continuing to flee from war-torn regions and political oppression, Gaba’s plaintive installation is notable in its quiet power and elegant statement on global geopolitics. 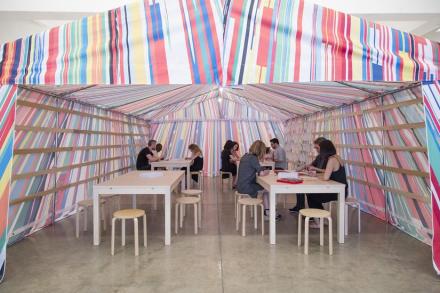 His works in the adjacent room also offer a middle ground between African craft and Anglo-European culture, creating a series of hand-braided wigs designed to resemble a number of major monuments and government centers in Washington, D.C., including the White House, Pentagon, Washington Monument and Lincoln Memorial.  Presenting the varied landscapes of Washington as a marker of place that strands his wigs between West Africa and America, Gaba presents new modes of narrative engagement with the world around him. One can trace this engagement through the adjacent video work, where performers wearing the wigs lead a procession through the streets of Cotonou, Benin. Presenting these works as a comment on the distances and cultural separations between each location, Gaba pushes for a broader awareness of interconnected global threads, and for broader ways of visualizing them.

Gaba’s work is on view through July 28th. 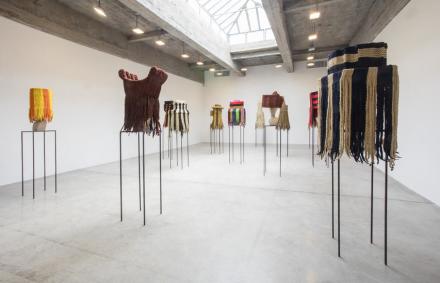 This entry was posted on Thursday, July 27th, 2017 at 12:31 pm and is filed under Art News, Featured Post, Show. You can follow any responses to this entry through the RSS 2.0 feed. You can leave a response, or trackback from your own site.