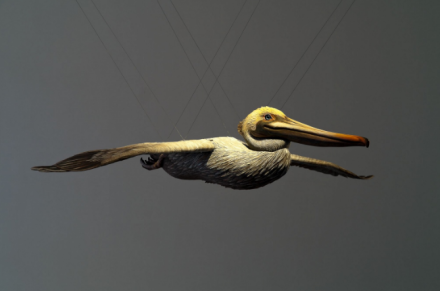 Marking a new stage in his engagement with the cultural landscape and natural phenomena of the California coastline, Alex Israel returns to Almine Rech’s Paris location this month, presenting his aptly titled solo exhibition, Summer 2.  Drawn from the artist’s work on his forthcoming feature-length film, SPF-18, Israel has created a series of aluminum and acrylic wetsuit sculptures, text-based pieces, and an extremely detailed pelican sculpture, each presenting its own twist on the familiar iconography of the beach environments he has so often used as source material. 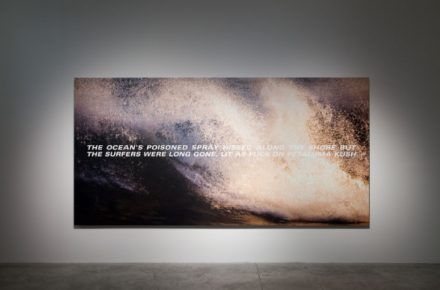 Israel’s work on SPF-18, his own take on the teen beach movie genre, should come as no surprise.  His interest in both the tropes of Southern California and the methods of cultural production that underwrite them have long sat at the center of his work, rendering pieces that mix together a precise eye for artifacts with a distinctly subtle sense of humor.  Frequently working between text, sculpture and video, he frequently touches on the language of the shopping mall, the talk show, or the Sunset Strip,  all blended together with a sense of Hollywood polish that mirrors the landscape of the film industry humming around him. 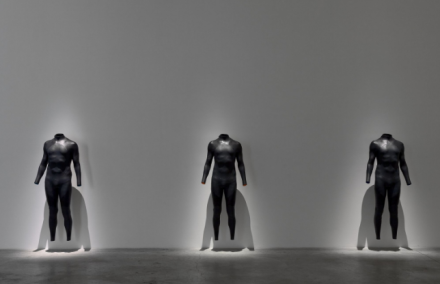 The show in Paris pulls from SPF-18‘s interest in the beach, yet seems to present a remainder of sorts, works that seem tied to his work with his new film while branching out into more nuanced engagements with his subject matter. At the center of the show is Pelican, a hyper-real sculpture inspired by the birds’ near constant presence in the background of shots during Israel’s on-location shooting.  Delving into the bird’s almost unbroken evolutionary relationship to pterodactyls, and their constant presence along the shoreline, Israel’s work turns the animal into a spectacle of its own.  Recruiting Michael Curry, one of the puppet designers behind the Broadway production of The Lion King, Israel has produced a lifelike replica of the bird, strung up on multiple wires that make the bird flap its wings, move its head and peer about the gallery.  Israel’s engagement with this imagery of his home state, pulled through such a meticulously crafted object, equally seems to suspend the bird in a space between artificial space and reality, a rupture that emphasizes Israel’s investigations into the simulacra of pop, and more broadly, the hazy cultural sphere of his chosen subject matter (Hollywood, the beach, etc.).  His pieces move from image for contemplation into a meditation on the reproduction of the world, even down to the most banal background figures, as much about the techniques and production methods as they are about the image itself. 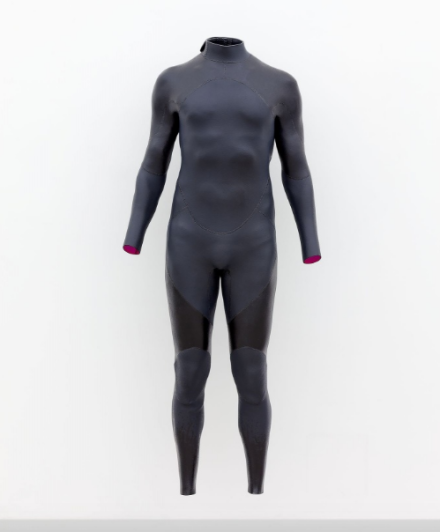 Alongside Pelican, the artist is also showing a series of wetsuit sculptures, referred to as self-portraits, which present the body as a framework, a model which ultimately generates the signifiers of surfing, figures that negotiate a space between the body itself, and the referents that adorn them.  A large-scale acrylic painting nearby draws on a similar concepts, echoing the surfer’s cultural domain in a system of reference points that seems so precisely compiled that it almost dissolves into the crashing waves behind it. 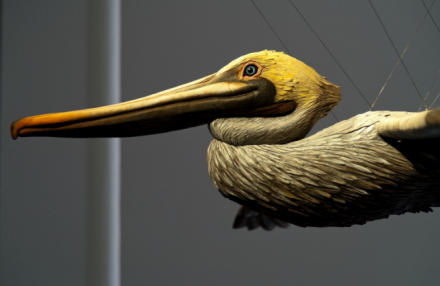 This understanding, of the dense fog of reference systems converging in both his chosen environment of study, and of the varied objects that swim in and out of focus within it, makes for a fitting addition to Israel’s body of work, both on his upcoming film, and his body of work more broadly.

This entry was posted on Saturday, July 22nd, 2017 at 12:44 pm and is filed under Art News, Featured Post, Show. You can follow any responses to this entry through the RSS 2.0 feed. You can leave a response, or trackback from your own site.