Athens – Divine Dialogues: Cy Twombly and Greek Antiquity at the Museum Of Cycladic Art Through September 3, 2017 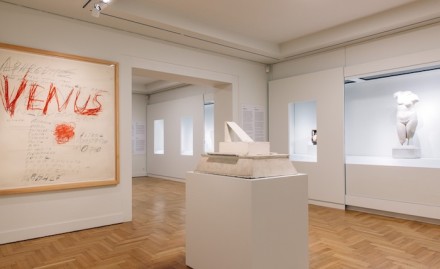 On the occasion of Documenta 14 in Athens, the Museum of Cycladic Art presents “Divine Dialogues: Cy Twombly and Greek Antiquity,” an exhibition that juxtaposes twenty-seven works by the American artist Cy Twombly with twelve ancient Greek artworks and objects from the Archaic and Classical periods. As the press release concedes, the impact of Greece’s geography and mythos on Twombly’s artistic production is widely known; “Divine Dialogues” seeks not just to reaffirm the scope and depth of this influence, but to make a firm case for Greek antiquity’s continuing relevance to modern and contemporary art at large.

The exhibition is divided into seven sections, six of which are dedicated to a Greek deity, hero, or personification that has recurred in Twombly’s work—Pan, Aphrodite, Apollo and Dionysus, Aristaeus, Orpheus, and Nike. One section is consecrated exclusively to the imposing Kleitias and Ergotimos Krater or “François Vase,” on loan from the Archaeological Museum of Florence and exhibited for the first time outside of Italy. 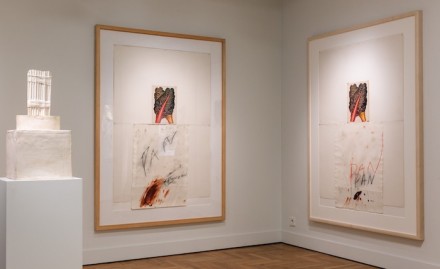 Two of Twombly’s large-scale collages from 1975 are displayed alongside Untitled, a 1985 white synthetic resin sculpture of a syrinx (or “pan-pipes”), an attribute of the half-human, half-goat god Pan, in the first gallery. Each collage consists of an illustration of chard leaves, culled from a natural history book, followed by Pan’s name—written twice in one work and only once in the other, where the name is followed by the word “panic” in parentheses. Angled in a corner of the opposing wall is a 2nd c. AD marble table support in the form of a pillar depicting the standing god Pan, aptly holding the syrinx in his left hand. This initial arrangement sets the pace for the rest of the exhibition. Rather than identifying isolated instances of mythological allusion, the chosen works by Twombly speak to the artist’s commitment to revisiting the same figures repeatedly throughout his oeuvre—the syrinx sculpture Untitled, for example, is one of six copies of a 1959 work created by the artist nearly three decades later. 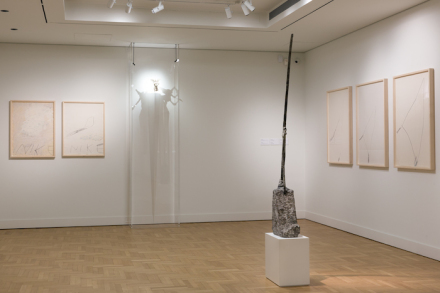 In fact, the exhibited works by Twombly exemplify the artist’s desire to present and re-present a single mythological deity or hero according to a series of different guises and characterizations. The most frequent of these is perhaps the nominal, as in Twombly’s 1962 Venus, a work on paper on view in the following gallery where the Roman name of the Greek goddess Aphrodite is spelled out in large red letters, dwarfing her many epithets enumerated below it in smaller print. But the artist also presents Aphrodite non-textually in a pair of figurative drawings from the same year that narrate her emergence from the sea foam. And there is yet room for abstraction—Twombly’s dynamic triangular bronze sculpture Untitled from 1985, in the final gallery, recalls the winged shape of the Nike of Samothrace, currently in the Louvre. 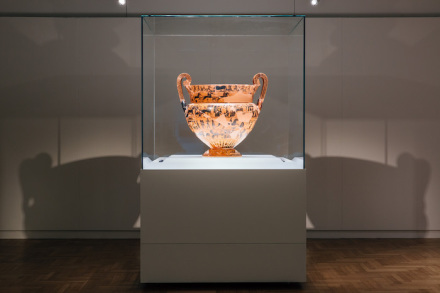 The rhythm is interrupted halfway through the exhibition by the François Vase. Enclosed in glass and displayed independently in its own gallery, the Attic volute krater is not paired with counterpart works by Twombly. This decision to break temporarily with the show’s format is perhaps one of the curators’ most successful ones. At this disjuncture, “Divine Dialogues” reveals itself as an exhibition that is as much about Greek art as it is about its connection to Twombly. Despite the significantly higher ratio of works by the contemporary artist to antiquities, the ancient deities, heroes, personifications, and objects exhibited here are not subsumed under the category of Twombly’s many sources of inspiration—they stand autonomously, further substantiating the artist’s fascination.

“DIVINE DIALOGUES: Cy Twombly and Greek Antiquity” is on view at the Museum of Cycladic Art in Athens, Greece through September 3, 2017.

This entry was posted on Wednesday, August 30th, 2017 at 5:09 pm and is filed under Art News, Featured Post, Show. You can follow any responses to this entry through the RSS 2.0 feed. You can leave a response, or trackback from your own site.