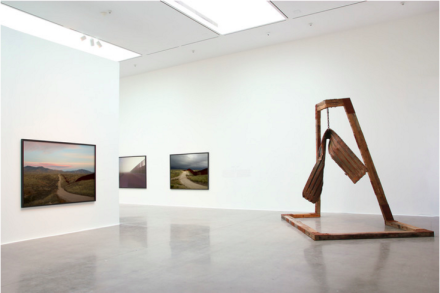 Pace Gallery and Pace/MacGill Gallery present Border Cantos, a collaborative multimedia exhibition by artists Richard Misrach and Guillermo Galindo. Misrach, an American photographer, and Galindo, a Mexican-American experimental composer, have been working together since 2011, blending musical scores and photography, instrumentation and sculpture, to discuss and represent the increasingly militarized 1,969-mile border wall between the United States and Mexico. The work in Border Cantos spans photography, sculpture, and sound, integrated seamlessly to create an impression of the presence of tragedy and tenuousness. 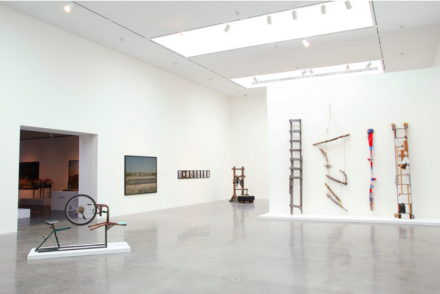 Inspired by avant-garde and indigenous musical traditions, Galindo has responded to the recent wave of border militarization through musical compositions. He collects the physical detritus of the borderlands (water bottles, backpacks, clothing, shotgun shells, and children’s toys, for example) and transforms it into kinetic sculptures or instruments through which original scores are produced. By generating sound from these cast-off belongings, Galindo hopes to give voice to the invisible victims of immigration, translating the physical material of their movements and oppression into audible sensation. 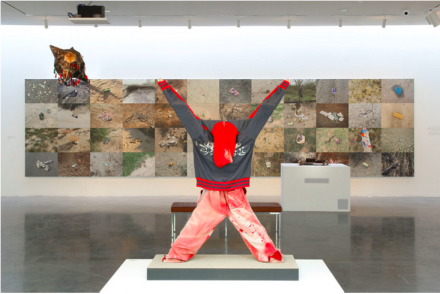 Misrach, on the other hand, has been producing photographs of the changing landscape of the American West since the 1970s. He captures sweeping, richly colored vistas through a politically-engaged and environmentally-conscious lens, documenting the devastating effects of human intervention, industrial development, nuclear testing, and pollution on the natural world. Over the last decade, his focus has been the U.S.-Mexico border, producing images of shooting ranges, personal artifacts, Effigies or scarecrow-like figures, as well as sections of the Wall itself. 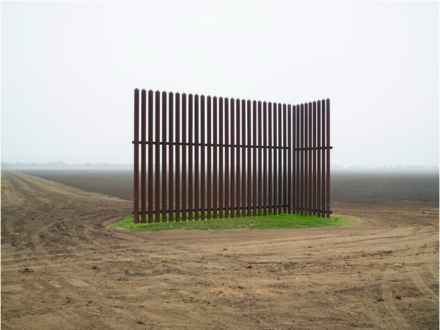 The artists met in 2011, when Misrach encountered one of Galindo’s border relic compositions and began sending him immigrant artifacts that he photographed. From this moment, their artistic partnership continued to form until their work became completely intertwined. Galindo explains, “Richard’s photographs have become music and my music has materialized in his images. At this point one thing cannot exist without the other.” The collaboration has extended beyond an artistic dialogue, and can now be read as an investigation into the mutually constitutive effect of the borders between nations, people, and media. 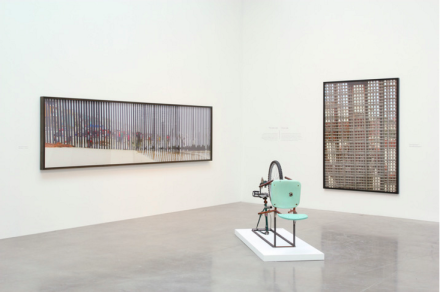 Border Cantos includes a selection of Misrach’s large-scale color photographs, taken over the past decade at the border, as well as Galindo’s instruments and compositions. This audiovisual show seeks to bear witness to the multiplicity of narratives of the thousands of individuals who cross the border every year. Musical and visual compositions are constructed out of the material remnants left behind, or the traces of these stories. At a moment when homeland security, immigration reform, and the border are at the forefront of national news and political discourse, Border Cantos resonates as an important and sobering moment of clarity.

This entry was posted on Sunday, August 13th, 2017 at 2:04 pm and is filed under Art News, Featured Post, Show. You can follow any responses to this entry through the RSS 2.0 feed. You can leave a response, or trackback from your own site.