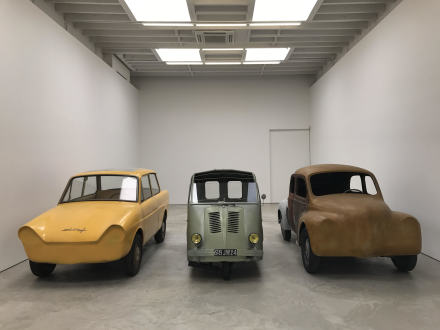 Three cars parked side by side make up Robert Grosvenor’s Untitled (2014-17), a single work presented as the artist’s second solo exhibition at Karma’s downtown exhibition space. We can’t be certain that the term “parked” accurately describes these objects, however, as it implies movement that was halted, and a close assessment of the vehicles does not yield a consensus on their past or present mobility. Our fascination with Grosvenor’s sculptures runs parallel to our suspension in this perpetual state of uncertainty, in which the work of art becomes the site of an investigation into the identity of an object. 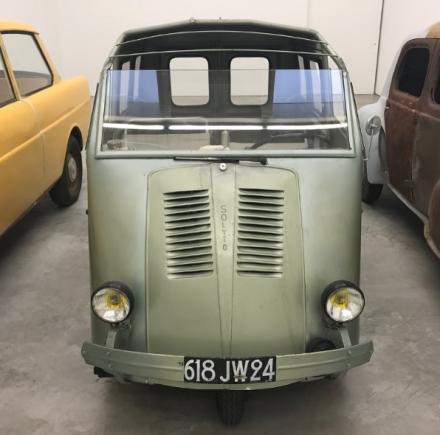 In addition to representing three distinctly small European models from the mid-1900s, Grosvenor’s cars share a common lack of basic features that would secure their functionality: the yellow DAF “Daffodil” from the 1960s on the far left, for instance, has been stripped of tail and headlights as well as door handles; the faded, rust-brown vehicle on the right is inexplicably windowless. These signs of neglect contrast sharply with the visible vestiges of recent use: in the Solyto in the middle, a three-wheeled utility vehicle from the 1950s, a rabbit’s foot keychain and key seem to have been left behind on the dashboard. 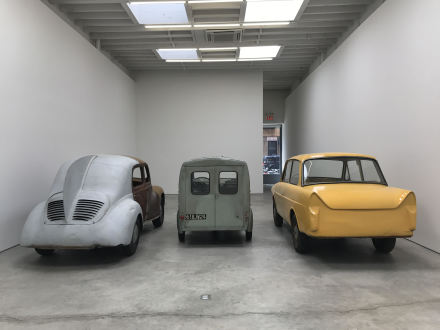 Somewhere between the traces of wear and the marks of disuse lie a number of elements that fall into neither category. How to account for the speedometer on the Solyto, for instance, which reads a clear 6.7 kilometers an hour while the car is remains motionless — or the inclusion of a sizable metal fin on the back of the run-down car on the right? In his 1968 text “Le système des objects,” Jean Baudrillard reflects on the curious trend of tail fins on American cars, describing the add-on as an ornament charged with symbolic, rather than functional, value: “Tail fins were a sign not of real speed but of a sublime, measureless speed. They suggested a miraculous automatism, a sort of grace.” For Baudrillard, and likely for Grosvenor, tail fins exemplify the potential of an object to stand in for a fantasy. 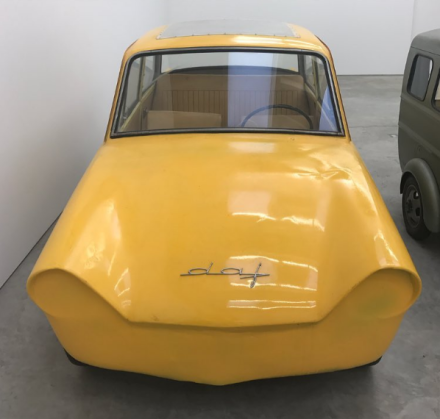 Despite the numerous elements that have been effaced from the automobiles in Untitled (2014-17), Grosvenor has selectively conserved several hints of their respective histories. The emblem on the Solyto is still intact, a particularly relevant decision as the model’s name is an acronym of Société Lyonnaise de Tolerie, the sheet metal division of French manufacturer New-Map—information that exposes, rather than obscures, the vehicle’s personal story. If Grosvenor’s Minimalist contemporaries sought to activate the perceptive interplay between sculpture, space, and viewer via objects that were defined by their sterile anonymity, much of Grosvenor’s work is contrastingly loaded with specific meanings and concrete points of origin. 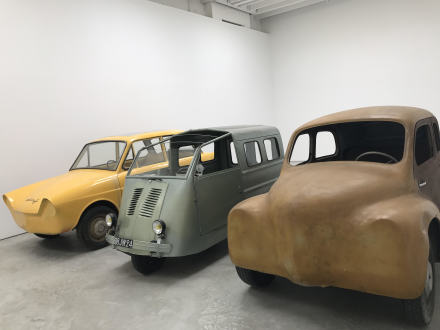 Grosvenor has pursued the allure of an object’s past and present persistently throughout his oeuvre. The artist’s wooden beam sculptures of the 1970s, abruptly frayed or cracked at the ends, stir a similar curiosity about the life of a physical thing. At its core, Untitled (2014-17), and Grosvenor’s work in general, is about the mystery of objects: he makes us see the humor in their enigmatic construction, while affirming their inanimate innocence and hinting darkly to their status as totems of consumption.

Robert Grosvenor’s work is on view at Karma through August 13, 2017. 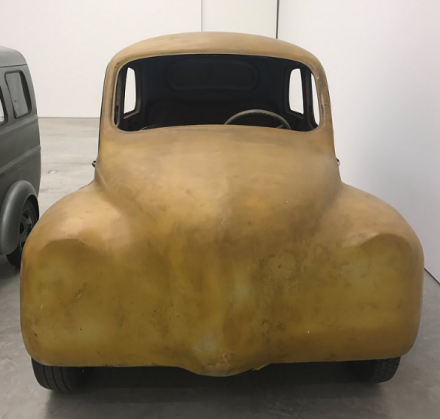 This entry was posted on Saturday, August 12th, 2017 at 5:56 pm and is filed under Art News, Featured Post, Show. You can follow any responses to this entry through the RSS 2.0 feed. You can leave a response, or trackback from your own site.