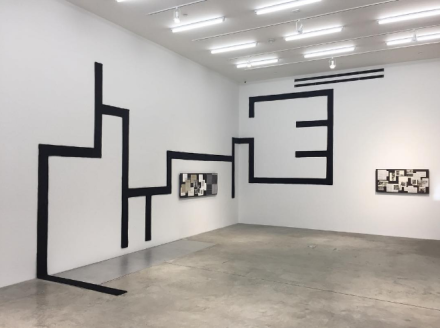 Over the course of their respective careers, Andrea Zittel and Tom Burr have both negotiated an enigmatic and thorough interest in the built environment, addressing questions of site-specificity, subjectivity, and the body through spaces and environments that pull lived space and imagined realities into a shared domain.  This month at Bortolami, the pair’s respective visions will also share a common site, grappling with similar visual languages and interests in text, assemblage and architecture to challenge readings of space, and the strategies we employ to exist within our given environments.

Throughout both bodies of work on view, notions of space and function present themselves as interchangeable, and often inextricably linked, given over to particular uses and concepts by their presentation and context.  In Zittel’s work, in particular her Hard Carpets and Single Strand pieces, the artist uses predetermined shapes and forms, which draw on rigid rules systems to realize their movements and interactions with the room itself.  Her Strands snake up and down the walls, relying on established rules in how they pass through space to create unique structures tied together by their geometric elements and familiar patterns.  Similarly, her Carpet works critique placement as a determining factor in an object’s reading, either as a functional object or piece for contemplation based on their presence on the floor or wall. 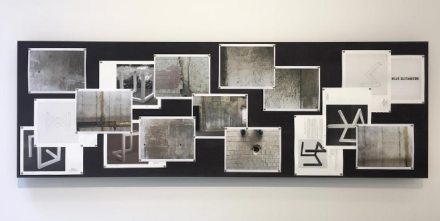 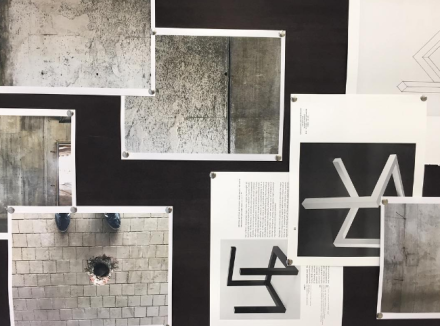 Burr’s work, by contrast, traces similar arching pathways and lines through subjective space, creating a series of bulletin board sculptures that path relationships and linkages through a range of figures with varied relevance to the city of New Haven, Connecticut.  Jean Genet, Anni Albers, J. Edgar Hoover, and Jim Morrison all appear across these works, drawing connections between figures whose prior existences in a shared cityscape seemed only coincidental or even unrelated.  Recapturing the city’s radical approach towards re-thinking modern urban life during the 1960’s and 1970’s, and how these concepts may have found expression in externalized figures and identity politics Burr’s work makes an interesting link with Zittel’s nearby work Tellus Interdum.  Replacing the text in the stark grids of the local newspaper in Zittel’s Yucca Valley home with lorem ipsum placeholder, the artist emphasizes how networks of information production and knowledge are ultimately bound by the containers that carry them.  One can trace distinct assumptions about various texts and bits of news based on its placement on the page, with a broader awareness of how the news ultimately structures one’s expectations and understanding.  Much in the same way that Burr draws lines between figures unified against the modern city-scape, Zittel’s pieces in this framework push towards an awareness of one’s position within a broader series of structural systems and modes of expression. 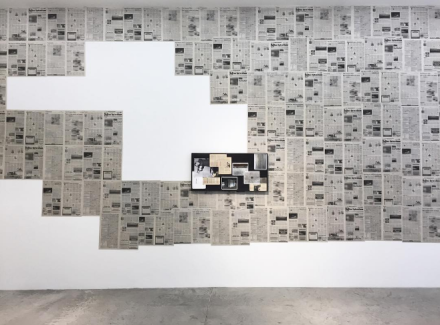 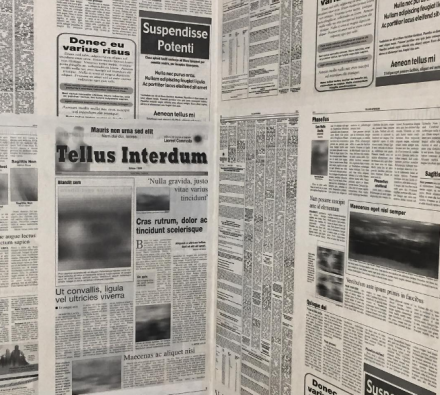 Taken together, it’s worth noting how these pieces ultimately manage to focus as a built environment of sorts, pushing the viewer’s experience beyond an understanding of isolated works, and into an engagement with space, its presentation of information, and the modes in which one’s movement through the gallery is shaped by these works.  Uniting a pair of artists whose interests in systemic processing render such a broad range of work, Bortolami has created a new system within the show, one which negotiates and manipulates the viewer’s understanding of space as they move through it.

The show is on view through August 11th.

This entry was posted on Monday, August 7th, 2017 at 6:52 pm and is filed under Art News, Featured Post, Show. You can follow any responses to this entry through the RSS 2.0 feed. You can leave a response, or trackback from your own site.