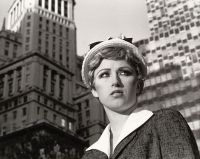 The Fondation Louis Vuitton in Paris is partnering with the Museum of Modern Art for a new exhibition, the Art Newspaper reports, presenting key works from the museum’s full holdings, including examples by Marcel Duchamp, Pablo Picasso, and Cindy Sherman. “MoMA is a beacon for Modern art in the West, and for decades its narrative of art historical Modernism was uncontested,” says the Fondation’s artistic director, Suzanne Pagé. “It has also established itself [with] its discernment regarding the art of today, an institution possessed of a clear-eyed vision of its future. Today, the doxa [common belief and opinion] are being reassessed.”Read more at Art Newspaper

This entry was posted on Monday, September 11th, 2017 at 7:20 pm and is filed under Art News, Featured Post, Show. You can follow any responses to this entry through the RSS 2.0 feed. You can leave a response, or trackback from your own site.