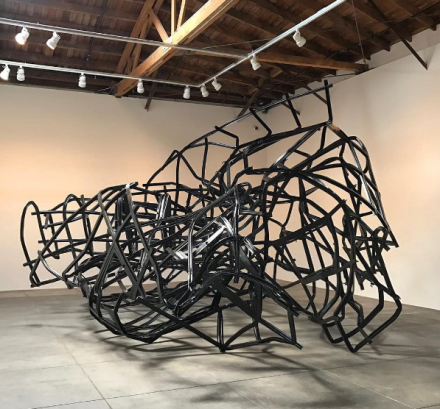 Taking over one of the multiple large-scale exhibition spaces at Hauser & Wirth’s cavernous complex in downtown Los Angeles, artist Monika Sosnowska offers an interestingly nuanced exploration of modernist architectural convention for her first solo show in the Californian metropolis. Spreading her twisted steel sculptures and varied spatial interventions throughout the gallery, Sosnowska’s body of work marks a negotiation between the historical landscapes and political structures of her home country of Poland, writ large against the gallery’s ample halls. 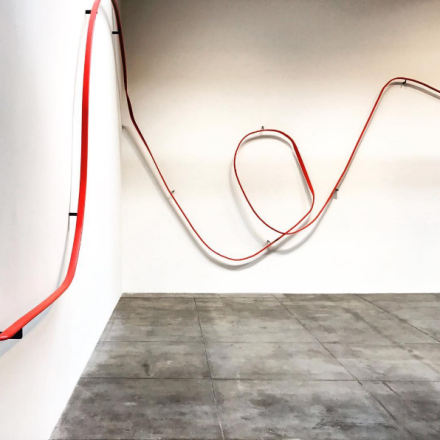 If there’s something vaguely familiar about Sosnowska’s work, it’s perhaps the reliance on both detritus and deliberate form as both compositional models and end results in and of themselves. Her works present themselves as object-sketches of sorts, immense tracings of exterior lines and general shapes that reference buildings from her home country, specifically from an era of communist occupation in the country. Her works, as in some sense, the traces of that ghostly past, an era of rapid development for the Polish nation overshadowed by its deprivation of freedoms and individual agency. Here, these forms are turned to relics, slowly fading away from their full, expressive forms in favor of skeletal remains. 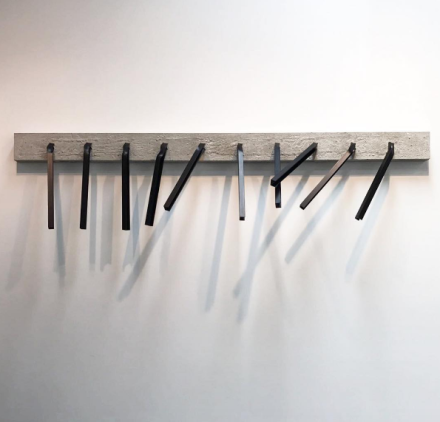 In other works, Sosnoska takes more minute approaches to similar concepts.  Stairs, for instance, twists a set of steel stairs into a twisting helix, spiraling across the floor in a manner that emphasizes its cast-off manner, but equally its built nature. The intent of Sosnowska’s work remains visible, its clean finishes and lack of scars, patina or dust turning destruction into an almost fetishistic display.  In others, like Frieze, small peices of rebar are transformed into an exercise in classic serialism, a point that doesn’t seem lost on Sosnowska, placing its hybrid contexts into full view in the gallery. 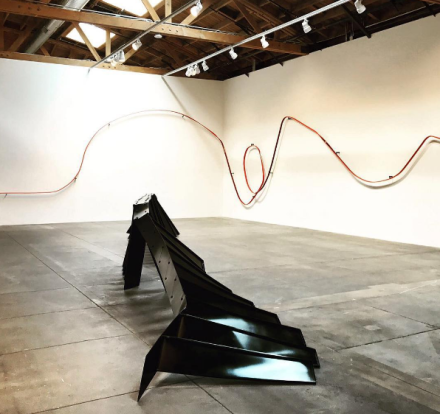 Elsewhere, architecture itself is turned into a playful parody of itself, all formal uses abstracted in favor of compositional abandon in a manner that underscores its presence in the gallery, and the artist’s presence working amid the landscape of craft she stands at arm’s length from. In Handrail, a red steel rail twists and loops across the walls of the gallery, almost daring an intrepid viewer to run their hand across each inch of its surface as it curves and twists towards the ceiling and back down to earth again. While similar references to the twisted steel of a society in the midst of a reconstruction, Sosnowska seems to equally emphasize the act of creation in this rebuilding process, and the outright enjoyment one may gain from making their world over again.

Sosnowska’s work is on view through September 17th.

This entry was posted on Saturday, September 9th, 2017 at 9:43 am and is filed under Art News, Featured Post, Show. You can follow any responses to this entry through the RSS 2.0 feed. You can leave a response, or trackback from your own site.