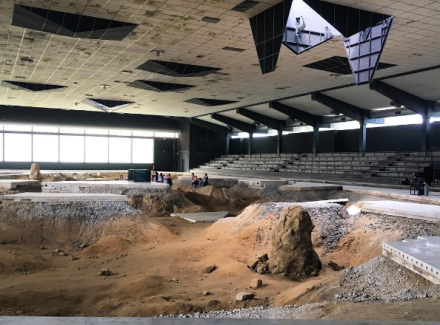 Pierre Huyghe, After ALife Ahead (2017), via Art Observed

Placing monumental works and nuanced environmental engagements across the city of Münster once each decade, the Skulptur Projekte touched down in the city again this summer,  spreading its wings over the German city for its fifth edition. Offering yet another take on the massively-scaled European art festivals, biennials and other curated events, Münster’s entry in this summer’s calendar is noteworthy in its engagement with the city itself. Embracing the location-sensitive capabilities of sculpture and public art, Skulptur Projekte welcomes meditations on what art might be capable of when inserted into the fabric of daily life, presenting a city where nuanced, conceptually-rich pieces of art can be encountered and experienced at almost any turn.

The fair rewards an intrepid spirit, inviting visitors to snake out around the city to find the various works and engagements with the city’s landscape. Perhaps among the most rewarding was Pierre Huyghe’s, a sprawling series of excavations into the floor of an abandoned roller rink on the edge of the city.  Carving away at the layers of floor in the space, and allowing large holes to filter light through into the cavernous structure, his work recalled that of Gordon Matta-Clark and his New York compatriots interested in the intersection of aesthetic principles and pre-established structures. Yet much like Huyghe’s other works, the piece becomes an incubator for life: algae grows in pools around the space, created by rainwater pouring in through the ceiling, while elsewhere plant life seems to slowly be emerging from his abstractions of the room. 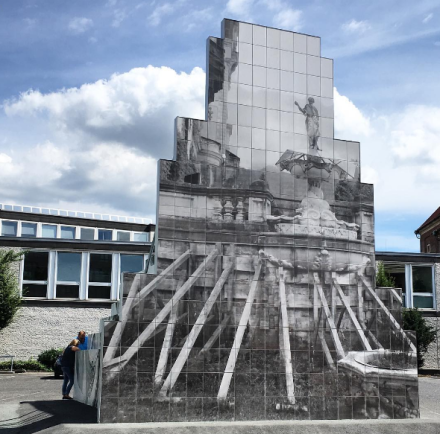 These interests in the changing nature of human experience, and shared concepts of space, identity and agency mark many of the pieces on view, underscoring the human scale of a show so frequently known for hulking sculptural material. One work particularly enmeshed in the daily lives of Münster residents was that of British artist Jeremy Deller. Inserting his own action into the daily lives of residents in the Schrebergärten (communities where residents each have a small garden for leisure time and personal enjoyment), Deller invited residents to keep personal diaries in the time between Skulptur Projekte’s creating a ten year documentation of the local community that filled the experience of the space with shared memories and a deeply personal sense of the lives intertwined in the space itself. 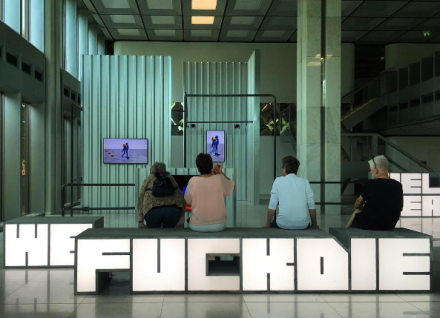 Elsewhere, the exhibition took on a more spectacular tone, particularly in artist immensely popular Ayse Erkmen piece On Water.  Stretching a taut fabric over the surface of the city’s harbor, ultimately uniting the commercial North side of the waterfront with the gritty, industrial South side, creating a space where visitors are free to move between social and economic zones atop a stretchy membrane. Another work drawing on both social space and a certain degree of critical levity comes from Cosima von Bonin & Tom Burr’s Benz Bonin Burr, a work that places a lone Henry Moore piece atop a Mercedes Benz flatbed outside the LWL Museum, complemented by a comical drawing replicating the Moore sculptures form into a surreal comic image.

True to form, the exhibition’s expansive and impressive scale demands a full wander through the city to fully grasp, but the social impact it has left on Münster is quite easy to see almost immediately.  The exhibition closes on October 1st. 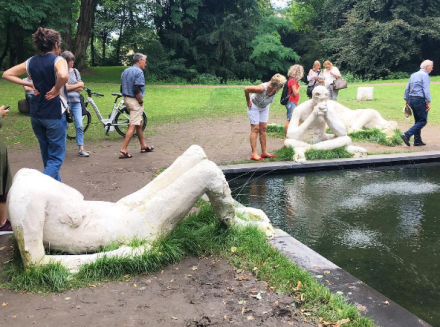 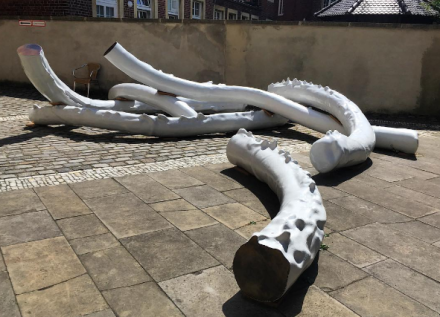 This entry was posted on Thursday, September 28th, 2017 at 7:33 pm and is filed under Art News, Featured Post, Show. You can follow any responses to this entry through the RSS 2.0 feed. You can leave a response, or trackback from your own site.