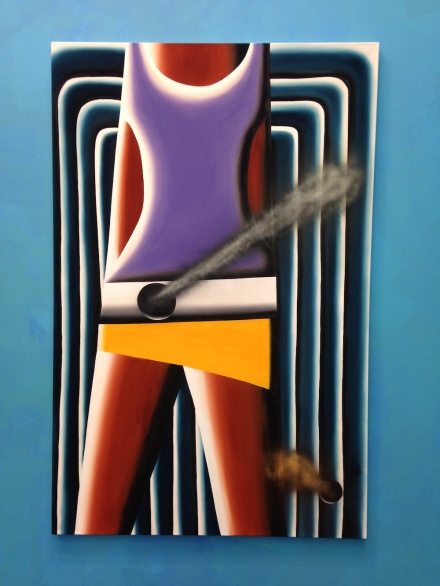 While today painting may often present draw critique as something of an exhausted genre, Cologne-based painter Andreas Schulze‘s surreal arrangements of bodies in space always manage to serve up a convincing protest.  This contrarian approach is perhaps best seen at Team Gallery where Schulze has arranged a series of smoky, slender depictions of beachgoers, bearing the apropos title Vacanze 365. Focusing particularly on torsos and pelvises, the painter captures vacationers sporting different types of beach attire in catchy patterns and bright colors, carrying smoke dispensers emerging as puffy clouds from belt-like stripes on waistlines. The gallery walls—covered in bright blue with traceable painterly gestures—bear an efficiently immersive installation, playing each work’s spry bodies against the soaring walls, with works hanging in untraditional angles in proximities to the ceiling. 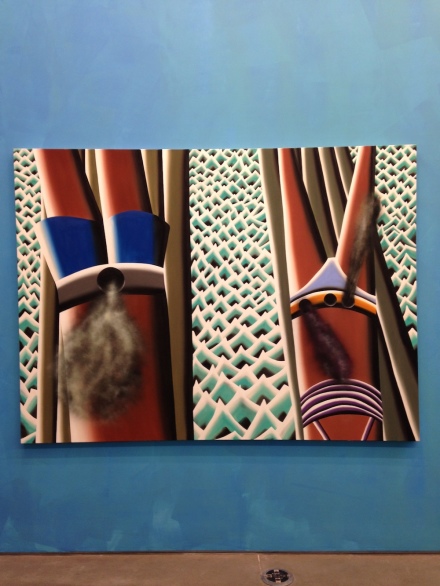 Schulze embraces the anonymity of the headless figures here, granting them a certain independence from character traits; various patterns on their tank tops and swimsuits convey abundance in optical forms, rather than facial traces or expressions. Schulze limits his mechanized and aloof figures with two dimensionality, turning them into serial entities detached from curves or voluptuous silhouettes, and opts for comical and stretched forms, accentuated by the graphics on each outfit. These amusing patterns help each tank top or pair of shorts stand out as a separate composition of sorts, enveloped within each bodily frame. The exaggerated robustness or thinness of his figures’ limbs contrasts with the warm and romantic ambiance the artist achieves through his use of Mediterranean tones. Reds, blues, and yellows (the word “vacanze” signifies vacation in Italian) prevail throughout his color palette. 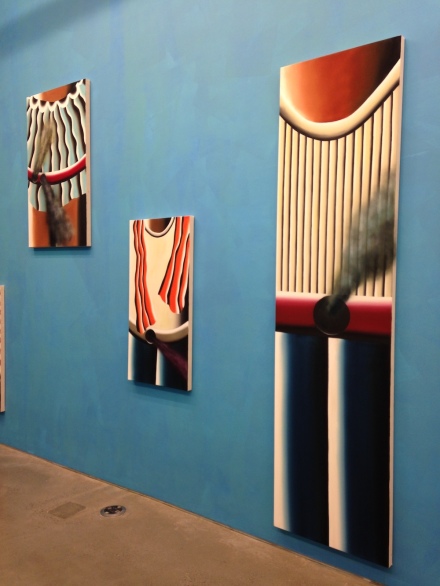 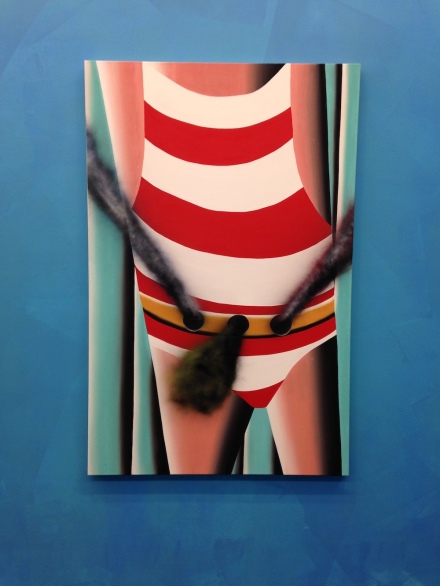 Occasionally, a dominant, angular geometry accompanies and often works against the flowing patterns that spread across the  surfaces each figures rest on. A man and a woman in Untitled (Vacanze) 22, for example, recline on a blue and gray prickly pattern reminiscing wavy waters or hilly sand. The smoke, bursting in various volumes and color densities, accentuate the figures’ inhuman, robotic features, claiming them as aging machineries shrouded in illusionary attires. His excellent play on reality and fantasy, on the human and alien, is best encapsulated in this series of “smoke belts” that pose between utilitarian and idiosyncratic. Schulze’s long list of references spans from Constructivism to Pop Art, yet he eschews direct socio-political commentary, instead embracing a distinct sense of aesthetic subversion in its own regard.

This entry was posted on Wednesday, September 27th, 2017 at 2:34 pm and is filed under Art News, Featured Post, Show. You can follow any responses to this entry through the RSS 2.0 feed. You can leave a response, or trackback from your own site.