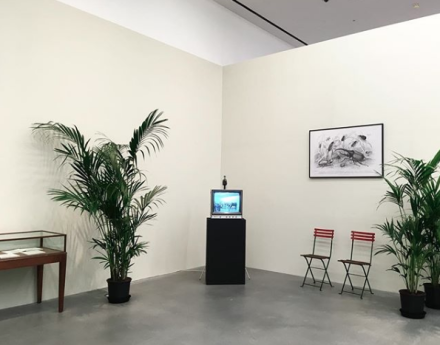 Few artists’ work have left such subtle, yet enduring legacy on the landscape of modern installation, institutional critique and socially-engaged work as Belgian artist and poet Marcel Broodthaers’s work has.  Branching out into uniquely self-aware, narrative spatial arrangements and installations the artist referred to as Décors, Broodthaers’s late work mined the language of the gallery and the museum to turn its perspective both outwards and inwards at the same time, often launching stark engagements with the political and social underpinnings of the art world that ultimately supported and carried his work. 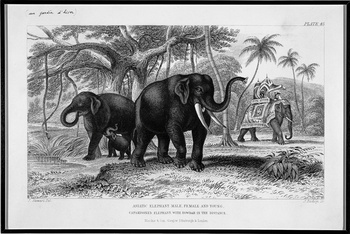 Among these works is Broodthaers’s iconic Winter Garden (Un Jardin d’Hiver), currently installed at the London outpost of Hauser & Wirth. Spreading throughout the gallery, the show is a spare, simple affair. Picnic chairs and potted plants dot the squat white walls erected throughout the room, accompanied by framed photographs and vitrines that collect varied images and photographs. In each, images of varied exotic animals and foreign scenes recall the era of the Wunderkammer or palm court, private collections of “oddities” collected from around the globe.  The sense of spectatorship and conquest is palpable, a thematic of acquisition and colonization running throughout the show that Broodthaers seems to understand as a parallel to the institutional motivations of the museum or gallery in its own right. 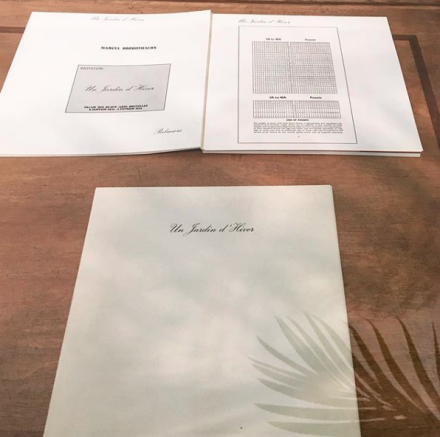 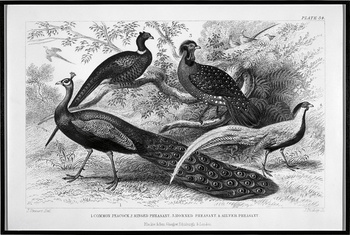 It’s a particularly resonant thread in the modern landscape of map-hopping art fairs and implications of “difference” produced by the varied contemporary art communities of the modern global art industry, a point frequently explored in the texts of writers and artists like Hito Steyerl and David Joselit.  If the modern act of collection and exhibition is presented as isolated within the language of the art world itself, these threads of conquest and economic dominance are dredged up here and put on full, if somewhat understated, view. Broodthaers, working in the late 1960’s, seemed intensely aware of both the historical, and political underpinnings of the world in which he worked, and his operations in Winter Garden make much of their context and locale. 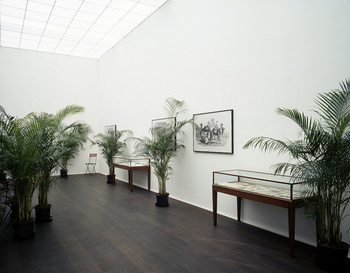 In that sense, the show equally explores the artists work as a fitting, yet unexpected pathway for a former poet, one that examines the text as much as the vehicle of its transmission.  Broodthaers’s work frequently occupies itself with language as much as the mode of speech, with each line and phrase as much as the page, the book (or the gallery space) carrying it.  From this understanding, his insertions of varied fragments and frameworks allow broader connections and concepts to emerge, ones that often threaten or challenge the illusion of apolitical cultural cohesion that the exhibition space is allegedly predicated on.

The show is on view through November 18th. 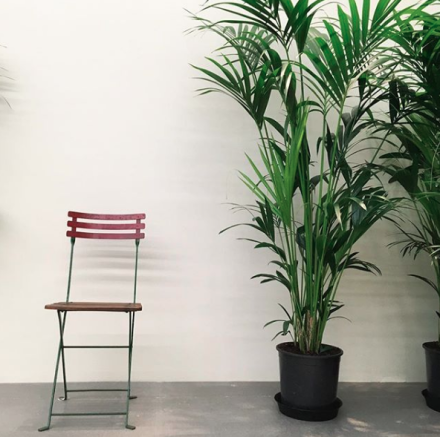 This entry was posted on Monday, November 13th, 2017 at 1:05 pm and is filed under Art News, Featured Post, Show. You can follow any responses to this entry through the RSS 2.0 feed. You can leave a response, or trackback from your own site.