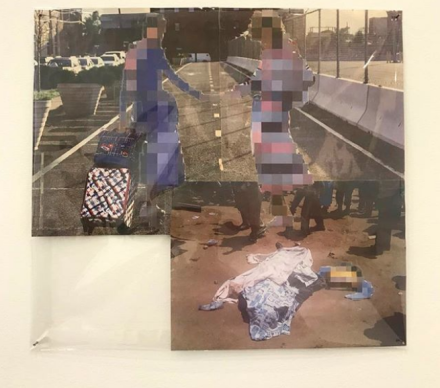 Complementing his large-scale sculptural practice and near-constant interrogation of the state of mass media, political power and imagery, Gladstone Gallery is currently presenting a body of works by Swiss artist Thomas Hirschhorn.  Marking a continued investigation of the act of depiction, the strategies of control and dissemination in modern media, and the utility  of horror that often underwrites modern image creation, the artist has created a body of pixelated collages, culling together scenes of modern sectarian violence with a sense of constant instability and unease. 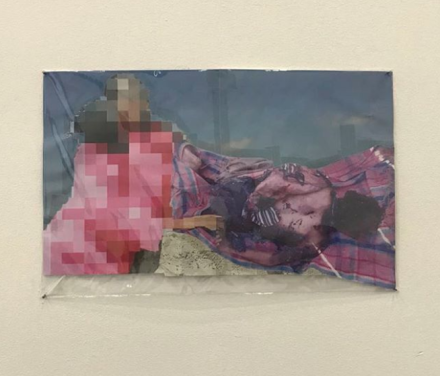 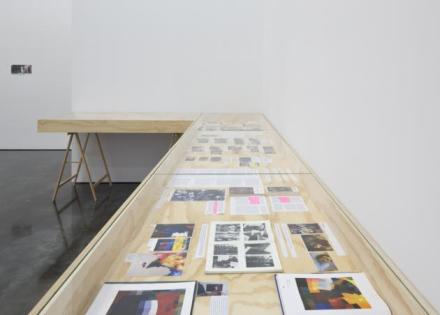 Hirschhorn’s work has long been invested in the suspension of both crisis and critique, delving into the possibilities of the spaces and moments created by traumatic events.  His large-scale works have re-created disastrous crashes and catastrophes like the upturned hull of the Italian cruise liner Concordia, or the installation of temporary libraries and monuments to deceased leftist thinkers that proliferate each theorist’s concepts while also holding the space dedicated to these ideas in a state of constant liminality.  Hirschhorn uses these moments as a space for contemplation and reframing, allowing the combination of text and image to infuse social interactions and points of conceptual engagement with a new political urgency. 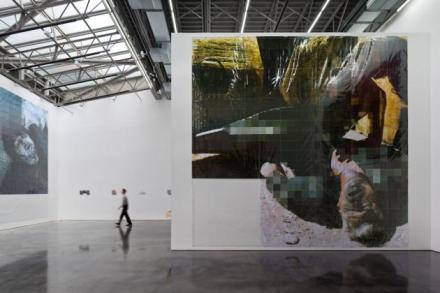 This same sense of the event dominates the collages on view here, albeit from the perspective of a moment (rather than a space or philosophy) frozen in photographic time-space.  His collages are fusions of battlefield photography, documentary image-making, and other explorations of moments of violence that are then pixelated to the point that their legibility almost disappears.  The images are then complicated by the inclusion of scenes that don’t easily fit into these same containers of war-torn sites and landscapes. 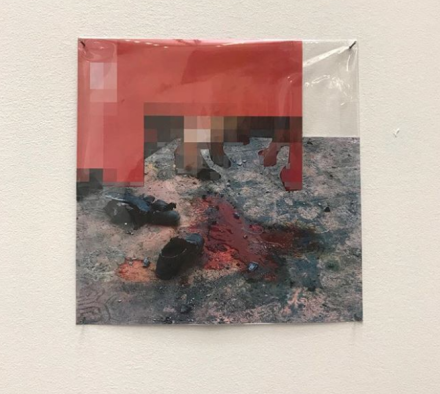 Figures shake hands or hold each other close, mug for the camera or merely wander across the screen, negotiating their own forms with the violence spaces of social breakdown that they are held against.  Hirschhorn presents these scenes and images as bound up in the act of censoring violent imagery, while begging the question of why such acts of censorship might be pursued.  In an era of overabundance of information and images, Hirschhorn sees these pixelated frames as implications of a protected audience, a group held back from the fraught violence depicted, and insulated in their first world viewpoints.  Reinserting and clouding the origins of his images, and twisting their various forms into each other, Hirschhorn re-establishes his images as sites where the depicted space cannot be read as other or immanent, a breakdown that causes a momentary panic, a sense of impending chaos, in the viewer.

The show is on view through December 22nd. 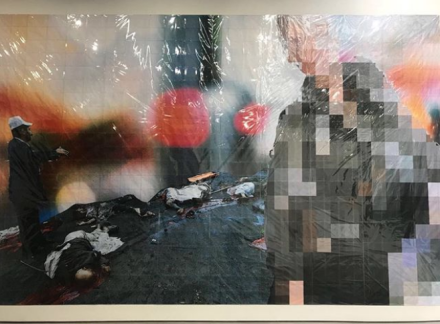 This entry was posted on Tuesday, November 28th, 2017 at 12:15 am and is filed under Art News, Featured Post, Show. You can follow any responses to this entry through the RSS 2.0 feed. You can leave a response, or trackback from your own site.