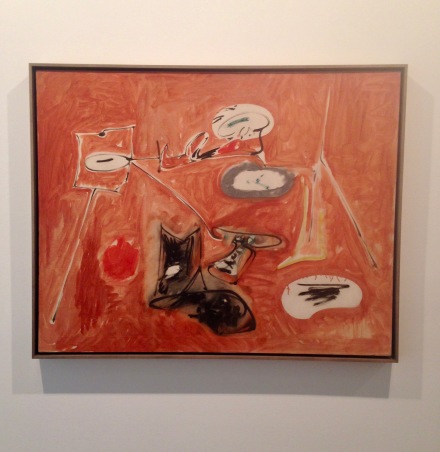 Arshile Gorky, Painting (1947-1948), All images are by Osman Can Yerebakan for Art Observed.

Hauser & Wirth’s first exhibition for Arshile Gorky, the seminal Armenian-American painter of Abstract Expressionism, focuses on a four-year period in his life, beginning with his stay at Crooked Run Farm in Virginia, and concluding around the time of a series of unfortunate events in 1947, a year prior to his passing. Already an established artist as a key figure in non-figurative painting during the mid 1940’s, Gorky retreated to his wife’s parents’ farm in search of creative stimuli that would augment his interest in fluid nonlinear forms and subliminal themes. His isolation from the New York art scene—a network the artist always chose to remain distant from while his peers Jackson Pollack and Willem de Kooning dominated the social circle—ultimately manifested itself in contemplative and personal narratives and natural colors. 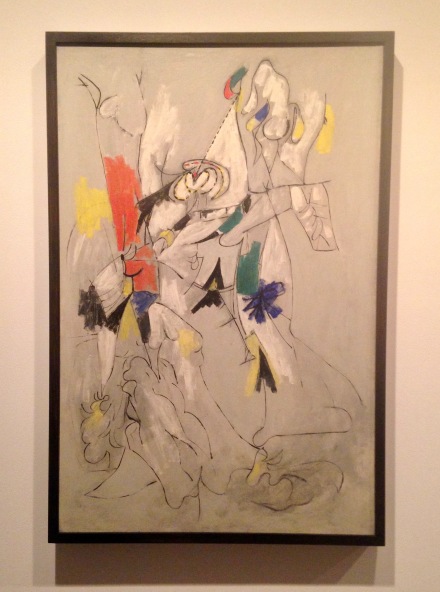 The drawings, most of which are studies for larger scale works on canvas, and paintings on loan from various international institutions and private collections deliver a melancholy-filled ambiance throughout the gallery’s Upper East Side townhouse. Gorky’s tumultuous biography, which began in the town of Khorgom (now the city of Van in Turkey) during the Ottoman Empire, saw him facing extreme hardships, including the death of his mother during the Armenian genocide and his migration to the U.S. to live with his estranged father. Notions of exile, displacement, and sorrow shroud the surfaces of his works as a result; somber titles, such as Study for Agony, The Plough and the Song or The Opaque, run in tandem to his meditative relationship with painting. His longing for a homeland that is impossible to return to, and his fascination for the Virginian landscape rejoice in equally wistful and jubilant pieces, such as Scent of Apricots on the Fields and Virginia Landscape. 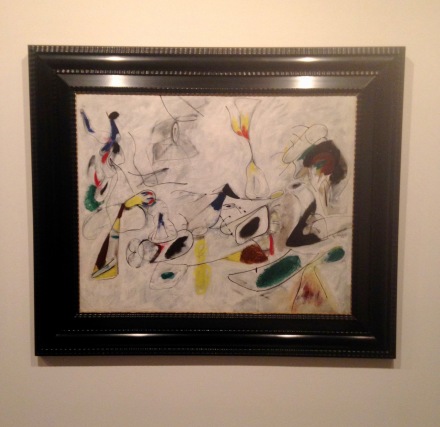 Coinciding with a period during which Gorky began to struggle with his deteriorating health, the paintings’ merge topographical surfaces and the body, particularly in larger scale pieces in which pastoral lines and forms intertwine with corporeal accents. References to human anatomy and its reflections in nature bear earthy colors and robust forms, while the artist’s color palette emphasizes hues that recall decay and earthiness.  Perhaps a reading of death drawing near to the artist’s door, the works on view see the artist continuing to rage against the fading of the light, even if the canvas was all he had at hand. 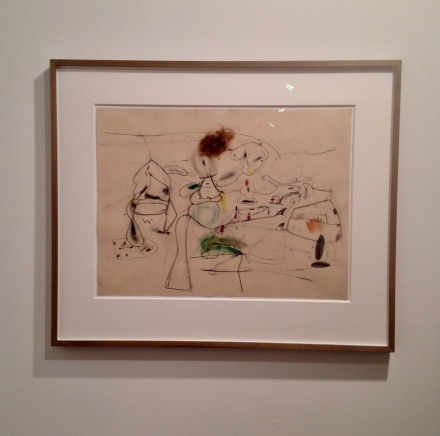 This entry was posted on Thursday, December 21st, 2017 at 5:51 pm and is filed under Art News, Featured Post, Show. You can follow any responses to this entry through the RSS 2.0 feed. You can leave a response, or trackback from your own site.