New York – “Contingencies: Arte Povera and After” at Luxembourg & Dayan Through December 16th, 2017 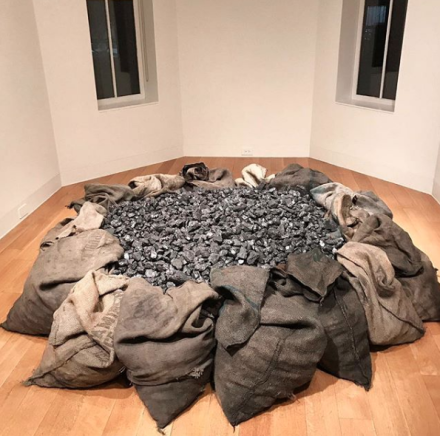 Jannis Kounellis at Luxembourg and Dayan, via Art Observed

A contingency is a future event or circumstance that is possible but cannot be predicted with certainty, one that may rely on distinct conditions or concessions made in the present. This conditional framework serves as the namesake of the most recent exhibition of work on view at Luxembourg and Dayan this month, one that poses its exploration of the Italian post-war as contingent on a viewer’s willingness to freely-associate between various modes of practice in contemporary art. 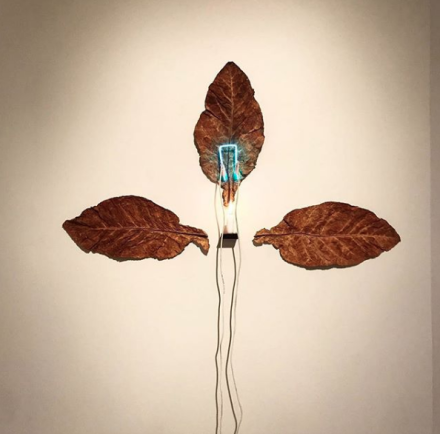 As an institution, Luxembourg & Dayan maintains a vital commitment to “the relationship between postwar Italian art and contemporary culture” that is reiterated in each of its shows. Such an expansive, free-ranging idea presents itself as distinctly flexible, with Contingencies being a prime example. Arte Povera and after imposes no limitations on itself as a title, and as such this show’s promise is easy to deliver upon. Luxembourg & Dayan works through the breadth that its title authorizes by claiming, “though the materials employed [in the show’s contemporary works] are not always “poor,” they are certainly self-effacing – …causing us to ask what new meaning “povera,” with its original promise of resistance, might hold today.” The gallery pursues a distinct binary (the material v. the immaterial, the Arte Povera vs. the non-Arte Povera) on the work, which ultimately emphasizes aesthetic judgments that undermine the conceptual underpinnings of canonized and contemporary works alike.

One enters on a set of sculptures by Elaine Cameron Weir. These are striking and familiar, as their sisters showed at the New Museum this year. With her Threshold 3 (2016), Weir uses medical-grade clamps to fix – most notably – a single stroke of blue neon, its accompanying electricity cord, an oil candle, and a mirror to a ribbed rod mounted vertically upon the gallery’s wall. Opposite Weir’s work is an overturned arm chair, decrepit and with a mirrored underside: Michelangelo Pistoletto’s Mobili capovolti (1976).  Continue upstairs to encounter an untitled Giovanni Anselmo granite and lettuce tension piece (1968), standing next to a Jannis Kounellis work featuring a pile of coal encircled by burlap sacks and framed within an octagonal corner of the gallery. Elsewhere, Carlos Reyes presents at eye-level two unplugged industrial fans with loaves of bread inside their cages. 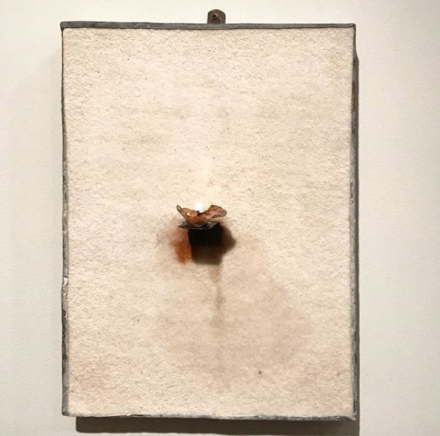 As a point of both physical and conceptual entry, the relationship between Weir and Pistoletto on the gallery’s lobby level present divergent interests in mirrors.  Mirrored surfaces recur through Pistoletto’s sculptural practice, while Weir also employs mirrors in both of her adjacent sculptures. But whereas Pistoletto troubles material differences (soft and hard being the most obvious) and the act of looking involved with mirrors, Weir illuminates alternate sides to her sculptures and gives viewers a peek at the otherwise invisible, while referencing a sense of scientific inquiry. In this way, Weir’s mirrors relate more to Canova’s reiterations of form, which aim to create single-viewpoint figurative sculpture, than they do Pistoletto’s exploration of the self in relation to objects, or a ‘promise of resistance’. The curatorial direction taken with these works puts the long social history behind Arte Povera into marked conflict with Weir’s sculptural investigation of anthropology. 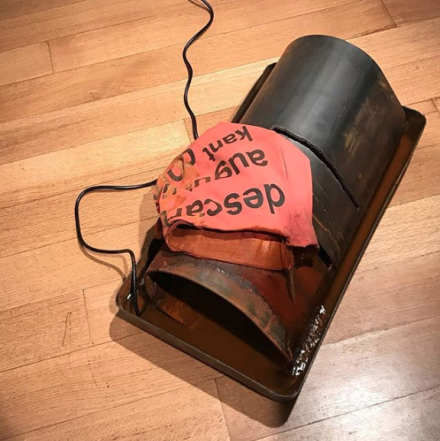 The conversation between works in the rest of Contingencies’ exhibition space is healthy and engaging, with materially similar works placed amongst one another. From this arrangement, observations flow naturally: Arte Povera artists rebelled against entrenched Italian institutions by returning to simple forms and materials in art; likewise, Olga Balema’s Thief in the Night exalts in the materiality of textiles and the pure beauty of folded cloth. But Arte Povera is fundamentally a critique and exploration of materiality, whereas contemporary work is often not. The relationships between materiality then and now are rewarding ones to mine, but they do not lead to the categorization of Weir, Reyes, or Olga Balema as neo-Arte Povera artists. Luxembourg & Dayan walks a thin line here, and risks undermining each artist’s own conceptual practice in favor of the curator’s vision, ultimately obfuscating the works’ meanings and histories.  The question Luxembourg & Dayan faces, then, is whether it is possible to pose these masterpieces against contemporary work, and how one can explore these relationships without pigeon-holing them into the boundaries of Arte Povera’s hard-fought victories. 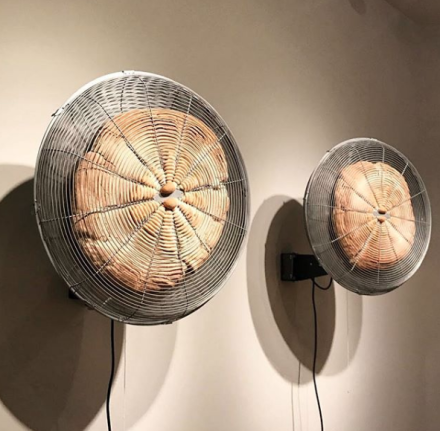 All things aside, Contingencies is a stunning exhibition that brings international contemporary artists into conversation with some of Italy’s best ‘60s and ‘70s exports.  Amidst a slough of high-profile Arte Povera exhibitions mounted in New York this season to celebrate the movement’s semi-centennial, Luxembourg & Dayan’s carefully culled works and the ten-foot-wide, four-floor-high winding townhouse they inhabit set Contingencies apart. While the curatorial vision of this show stifles some of the aspects of its works, sharp recontextualizations can lead to interesting thought experiments and new understandings of existing work. As such, the more you read into this show theoretically or historically, the more circuitous – and thus increasingly rewarding – connections seem to emerge. In the end the work prevails, and composes another striking and contemplation-inducing notch in the gallery’s belt.

The show is on view through December 16th.

This entry was posted on Tuesday, December 12th, 2017 at 9:43 pm and is filed under Art News, Featured Post, Show. You can follow any responses to this entry through the RSS 2.0 feed. You can leave a response, or trackback from your own site.