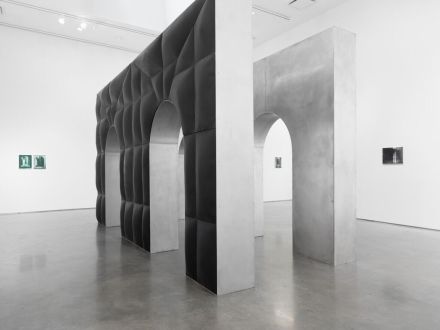 Returning to Marianne Boesky for his second solo exhibition with the gallery, Dean Levin has brought together a more ambitious and, paradoxically, more understated body of work than in his prior Boesky show, A Long, Narrow Mark. Through the series of sculptural installations and series of paintings assembled here, Arches takes Levin’s architectural interests and focuses them on the curved construct of an arch. 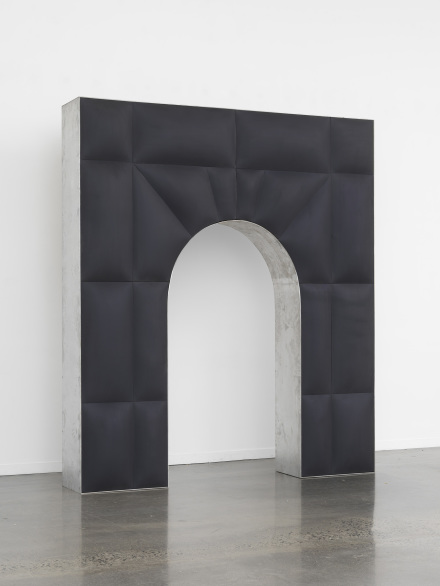 Levin, a former architecture student who later turned to art, deals with the historical context of the arch in his singed-oil paintings. First applying gestural strokes of oil paint to linen, Levin then burns off layers of paint from the linen surface, using machinery traditionally meant for 3-D rendering purposes. This technique allows Levin to put a digital, spatial rendering within the strokes of paint. The paintings – some diptychs, some stand-alone works – all depict dramatically lit arches, totally absent of figures or objects. Though the drawings illustrate the arches in pristine condition, the network of patchy brushwork adds a patina of ruin to these small-scale paintings. This aging of the image casts a romantic gaze over the arches, acknowledging their cultural importance and also hinting at the arch as a conjurer of the sublime. 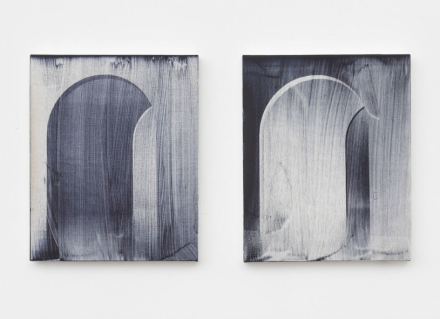 In the main gallery space, Levin has created two towering arches. Framed in aluminum, the faces of these arches consist of a matrix of convex plaster shapes, with Levin employing the building practice of “minimal surface.” in which the weight and amount of material are reduced by minimizing surface area. Yet as Levin’s paintings deal directly with arches from a historical perspective, his sculptural work here extracts the arch – along with minimal surface – from such a context and re-approaches it as a specific form. The Aluminum support-structure of the arches, as well as their plaster faces, bring these sculptures into the vernacular of minimalist art. The shaped plaster, painted a dark shade of green, recall elements of Robert Morris’ earliest works, and more explicitly perhaps, Donald Judd. 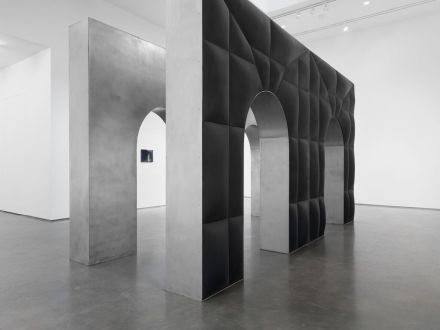 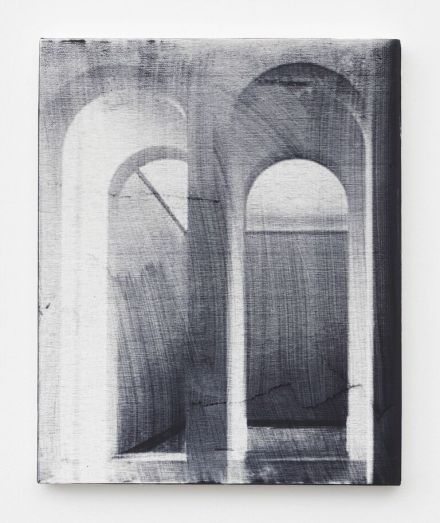 Levin’s own voice is most evident in the dialogue he opens up between painting and sculpture. In painting the plaster, Levin applied an imperfect coat. From a distance, the color appears uniform, but when face to face with the surface of the plaster, small drips and inconsistencies in the paint begin to reveal themselves. Similar to how Levin applied 3D processes to create the surfaces of his paintings, his practice utilizes the language of painting, and applies it directly to his sculptures. This deliberate confusion of procedures is perhaps the strongest aspect of Levin’s work, implementing processes that are common in one field into one where these same procedures are uncommon, and creating a pathway between the two. Levin’s art Inhabits this linked space, singular in form but with a nexus of roots in familiar territory. 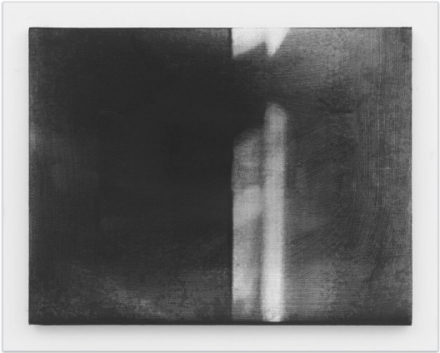 This entry was posted on Sunday, December 17th, 2017 at 11:52 am and is filed under Art News, Featured Post, Show. You can follow any responses to this entry through the RSS 2.0 feed. You can leave a response, or trackback from your own site.