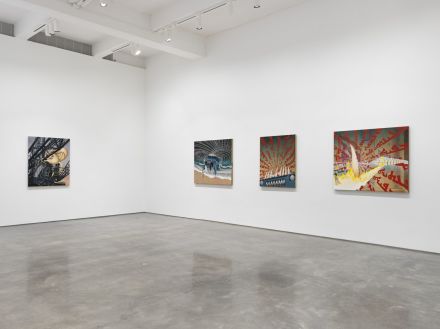 In his current show at Metro Pictures, artist Jim Shaw presents a group of new paintings, sculptures, and drawings—all from 2017. The show is the first in the city since his survey The End is Here was presented at the New Museum in 2015. Shaw’s work often mixes American cultural references with comic books, art history, religion, Greek mythology and his own subconscious. Suffice it to say that in the time that has passed since his New Museum. exhibition the political and social climate in America has undergone an upheaval. For this new show Shaw combines his usual brand of dark humor with themes of materialism, war and corruption in works that speak to the current state of affairs in America, post-presidential election. 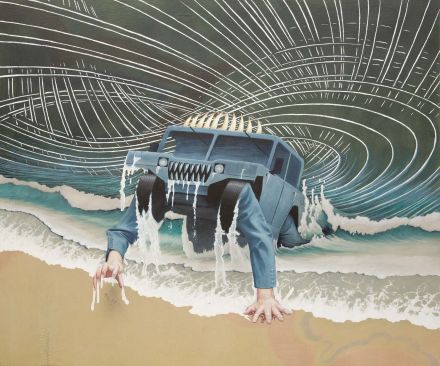 The body of paintings in the front gallery present us with a group of Surrealistic works containing layers of hidden meaning. Daniel’s Dream #1 (The Teeth of Steel) depicts a half-man/half-truck, in full business attire, climbing out of the sea. Could the hybrid possibly allude to capitalism, industry and its assault on the natural world and the climate? This character, and its evil-looking teeth appear in two other paintings on view as well. The third in the group, Daniel’s Dream #3 (The Lake of Fire), makes reference to a biblical prophecy in which evil doers will be judged and cast into a lake of fire. 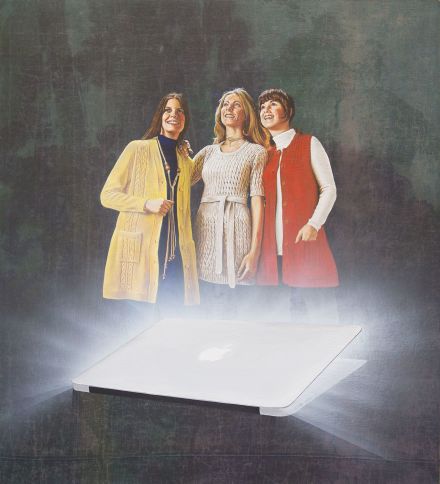 Opposite the Daniel’s Dream triptych are The Great Whatsit and The Ties That Bind. Each painting features characters that appear to be plucked from 1970’s magazine advertisements. In The Great Whatsit, for instance, three young women smile up at something out of the frame, as a larger than life Apple laptop floats slightly open in the foreground, shining its godly (or alien) light onto them. One can almost hear an angelic choir singing in the background, lending their voices to a heavenly experience with consumer technologies. In The Ties That Bind, the matching sweaters of the handsome couple are unraveling into a pile of gorgeous, curly blonde hair. Both paintings point to something false lurking behind the slick sheen of the smiling people. Perhaps Shaw is suggesting that our culture has lost its soul by placing all of its faith into machinery, and focusing on narcissistic concerns of outward appearances. 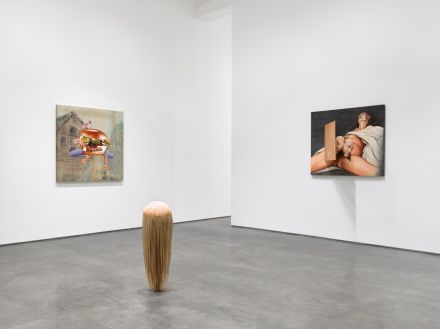 Hair and notions of vanity pop up again in two particularly wacky sculptures punctuating the space towards the back of the gallery. One is titled Head—a floating acrylic-painted foam ball, suffering from male pattern baldness but still holding on to what he’s got by growing out a ring of hair that reaches all the way to the floor. And the other is The Wig Man, a crawling creature, covered entirely in numerous wigs of varying texture and color, reminiscent of Star Wars’ Chewbacca. Both exude the dark humor that runs through all of Shaw’s work. 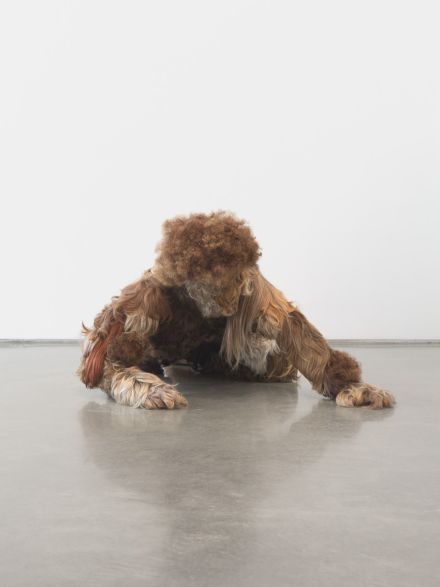 The back section of the show is more explicit in its discussion of current political events. Shaw presents a number of small-scale drawings—one depicting Hillary Clinton as Mad Meg. The work is a spin on an original painting by Pieter Bruegel the Elder from 1562 in which Mad Meg leads an army of women to pillage Hell. Mad Meg is otherwise known as Dulle Griet – a disparaging name given to allegedly unpleasant and “un-ladylike” women of the time. It was also a nickname for women deemed to be witches—a term continuously used to degrade Clinton by her opposers. 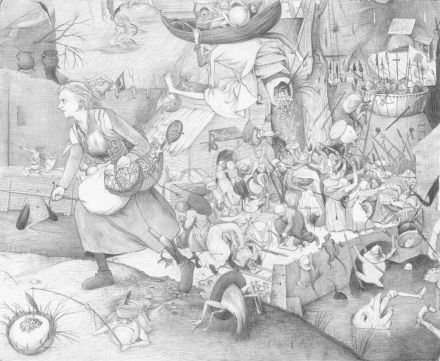 In the back of the gallery, Shaw also presents his meditation on the root of our current societal turmoil by giving us an entire room filled with drawings and paintings of the current president Donald J. Trump’s face. All in black and white and in a comic book style, the drawings are like studies for a cartoon villain—one with wild hair (there’s that hair again) and exaggerated facial contortions. The paintings are more chaotic and contain many overlapping faces of Trump elongated and stretched like silly putty. Small Trump Chaos II is even peppered with comic book action effects sans the BAM! SPLAT! POW! 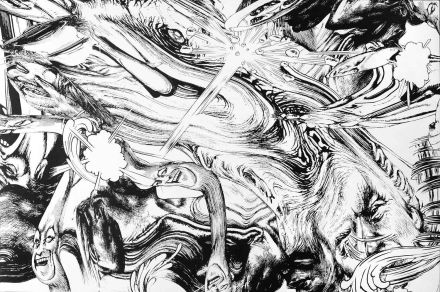 During his survey show, a large portion of the New Museum was turned over to displaying Shaw’s enormous collection of pedagogical and propaganda materials used by different religious fringe groups. Shaw has a fascination with various cults and their leaders. As a man who infamously claimed during his campaign that he could shoot somebody in the middle of 5th Avenue and not lose voters, Trump certainly fits into Shaw’s interest in “homegrown prophets”.

Shaw’s work has always been focused on issues of America’s cultural decay. But with works that allude to hellfire prophecies and complacent people now under the control of a demagogue with ridiculous hair, it is almost a shame that he already used The End is Here for his New Museum exhibition because it seems to be true now more than ever.

This entry was posted on Wednesday, December 13th, 2017 at 10:27 pm and is filed under Featured Post, Show. You can follow any responses to this entry through the RSS 2.0 feed. You can leave a response, or trackback from your own site.