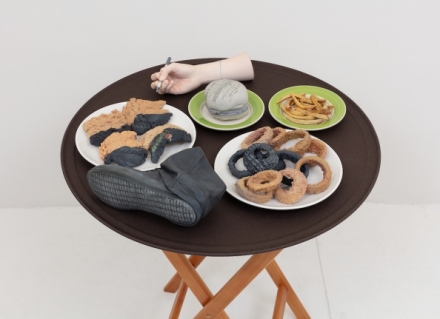 Currently on view at Metro Pictures, and continuing a trend this summer towards artists taking the curatorial reins for the summer group shows across the city, Josh Kline has pulled together a body of work for the Chelsea exhibition space under the title Evidence. Featuring the work of seven artists, Evidence investigates the nature of documentation and reality in post-truth America, posing the state of modern political discourse as an opportunity to reframe and rethink the act of expression.

The exhibition is, at its core, a response to issues of class and inequality in the United States, a selection of works and concepts that pull liberally from the landscape of modern culture as a mode of both meditation and recontextualization.  Kline seems particularly interested not in the act of representing reality as an object or piece, but rather in artists whose pieces open a site where reality, truth, or the subjective experience of these ideas, are as much a generative aspect of the work and its bounds.  The artists all address different aspects of our current political environment in which the distinctions between fact and fantasy have been deliberately confused, but equally explore how the truth itself is expanded and elaborated on by its telling.

Kline’s own work in the show is both a continuation of this idea, and of his practice, interviewing blue-collar workers across the United States and then creating molded replicas of their most-used body parts.  Allowing the worker to enter into a work that is simultaneously an expression of the physical toll of labor, Kline’s work serves to underline modern issues of work and life, while allowing the subjective viewpoints and ideas of his subjects into the piece.  Similarly, Allyson Vieira uses construction debris netting to compose an installation framing sculptures made from post-consumer waste—melted-down styrofoam with collaged plastic shopping bags—referencing class and labor conditions through the same materials that have caused them.  In another piece, Liz Magic Lazer’s video Primal Speech, the artist references Primal Scream therapy techniques and applies them to a staged therapy group comprised of characters holding opposing political views on Brexit and the 2016 U.S. presidential election.

These modes of practice are deliberately heavy on encounter, yet equally are invested in the field of art as the place in which this encounter is possible.  In a politically environment as socially and politically charged as the modern-day US and UK, Kline’s selected artists seem to frame the gallery, and its attendant sites of practice, as one of the lone spaces still open to experimentation and discussion.

This entry was posted on Friday, August 3rd, 2018 at 12:18 pm and is filed under Art News, Featured Post, Show. You can follow any responses to this entry through the RSS 2.0 feed. You can leave a response, or trackback from your own site.