Opening its doors this week for its 16th edition, Frieze London 2018 has once again turned the art world’s collective eye towards the British capital for the next week, as sales and installations across its spacious halls make for a fitting center to one of the city’s busiest art events. With 160 galleries from around the globe showing at the Regent’s Park exhibition space, the rest of the world seems to have come along for the ride. 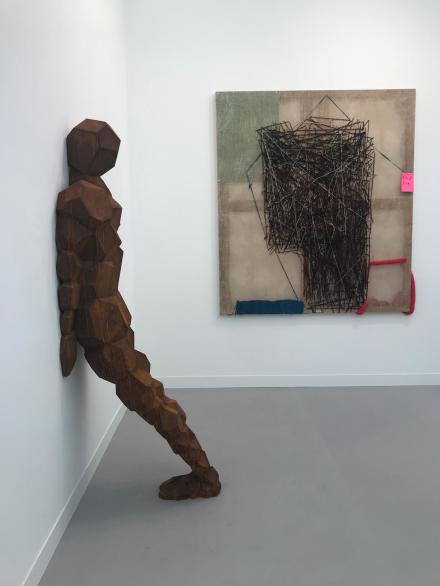 As regards its curatorial programs, the fair seems to have taken its cues from a range of contemporary issues, from the lack of visibility of women in the marketplace to hidden systems of communication and control. The themed section, Social Work, displayed women artists that challenged the status quo and delved into political activism in their art during the 1980s and 90s, among them Nancy Spero, Camille Henrot, and Helen Chadwick. Part of a program centered around the centenary celebration of women gaining voting rights in the United Kingdom, and selected by an all-female panel of curators, museum directors and art historians, the curated sections present a fitting cultural cue for the rest of the show to work with and elaborate on.

With curatorial concepts ruminating on previous failures of the market towards women artists, the sales of the week seemed to offer a bright future.  On Wednesday, David Zwiner sold all of his works by female artists including Bridget Riley, Lisa Yuskavage, Carol Bove and Rose Wylie, reaching into the six figures for many of the works.  Thaddaeus Ropac also had a strong week, selling works that ranged from a $160,000 suitcase by Tom Sachs to a $1.6 million canvas by Georg Baselitz.

More politically-engaged work was on view at Simon Lee, with a solo booth of brand new paintings by American Artist Jim Shaw reflecting the current American political situation. A gilded wallpaper covered the booth walls recalling the interior aesthetic of Donald Trump’s Mar A Lago retreat presented distorted reproductions of the president’s face in repeated patterns.  Fitting with Shaw’s continued interest in the grotesque features of American politics, it was a fitting show to reflect the fractious political discourse underway on the other side of the Atlantic.

At Pace, a focus on international artists featured works by Brent Wadden, Song Dong, Adrian Ghenie, and Yoshimoto Nara, bringing together artists from all over the world while celebrating London’s role as a creative hub for so much of the current artistic discourse in Europe.  Artist Adam Pendleton curated the gallery’s more historically-focused Masters stand, bringing together abstract paintings by figures including Sol LeWitt, Agnes Martin and Robert Ryman.

The Masters section seemed particularly well-organized this year, its  six millennia of art history from across the world offering ample context for the work of  pioneers of the avant-garde, and bringing unique perspectives on art history creating a hybrid environment for quality and discovery.  Artists spanning the range of modern art history were presented together with museum-grade works and objects such as ancient Chinese masterpieces, rare archaic sculptures from the Arctic circle, Japanese netsuke, manuscripts, and tapestries from 18th century India . Collaborating for the fourth year, Hauser & Wirth and Moretti Fine Art dedicated their presentation to Stephen Spender, portraying the poet’s life and relationship through objects and artworks.  Hauser & Wirth also sold work by Arshile Gorky, including Untitled, Head for $1,600,000 to a U.S. Collection, as well as a Lucian Freud for $155,000 in the opening days of the fair.  Nearby, Paris and London-based gallery kamel mennour collaborated with Lévy Gorvy for the first time to present a solo booth dedicated to French conceptual painter François Morellet.

Outside, the fair’s sculpture park offered a unique section of works that seemed to rely on architectural and spatial inversions, among them Richards Woods’s colorful, small-scale house sculpture, which was paired interestingly near a massive tower of steel blocks by Sean Scully.  These sorts of physical contrasts and investigations of space and form allowed the viewer a unique path through modern sculptural practice, backdropped by the lush lawns of London park and the city’s brisk fall weather.

This sense of exploration, a hallmark of the fair, and one of its main appeals, seems to have remained strong over the years, and one can only hope will continue to remain a central tenant of Frieze’s appeal.

This entry was posted on Friday, October 5th, 2018 at 11:10 pm and is filed under AO On Site, Art News, Featured Post, Show. You can follow any responses to this entry through the RSS 2.0 feed. You can leave a response, or trackback from your own site.