Matthew Marks Los Angeles has given over its West Hollywood exhibition space to a striking group show, exploring a younger generation of artists under the name Positioner.  The show takes its name from work by exhibiting artist Julia Phillips, and, much in the same way that the artist explores institutional power and discrimination in her own works, this exhibition focuses on the the manner in which artists today are currently focusing on depictions, representations, or consolidations of the individual within the modern field of art practice.

Throughout the show, various depictions and interests in the human form are foregrounded, particularly in relation to how they flow in and out of the modes of representation each artist embraces.  Paul Mpagi Sepuya, for instance, whose photographic arrangements draw on mirrors, outside bodies and varied modes of agency to arrange his works, ultimately arriving at complex deconstructions of the photographic plane.  In spaces where the artist’s work could be read as merely deconstructive investigations of the mode of creating the photo, his incorporations of other bodies and actors quickly pushes the work back into a subtle contention with authorship and representation again. 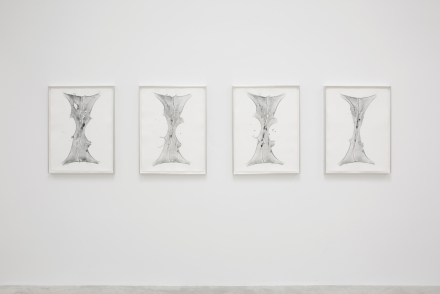 By contrast, the college-based works of artist Ravi Jackson and the corporeal rearrangements of sculptor Lena Henke both incorporate parts and pieces of the body in pursuit of something more abstract.  Representations of both unnamed figures and celebrities like Toby Keith dart in and out of Jackson’s work, paralleled with paint in varied skin tones spread across the work with great, energetic strokes, ultimately arriving at a composition that seems to push the body and its various cultural standpoints as exchangeable, or, perhaps, as a spectrum of reference systems that chance based on position and perception. Henke, by contrast, dwells in multiples and multitudes here, dotting her works with a number of purple busts, or other momentary glimpses of a human actor behind the arrangements of seemingly haphazard material.

Each of these perspectives is united in Phillips work, and perhaps offer counter-readings to her investigation of bodies held in suspension, artifacts standing in for the human users that may or may not be in existence any longer.  Emphasizing exercises of force, of power and politics, the artist’s work seems to both dwell on a de-prioritization of the body through the articles she uses, while simultaneously emphasizing its absence, and, by some readings, its repression from realization.

Throughout, the artists on view offer a perspective that is fluid and dynamic, a fitting script that offers new options for understanding bodies and people, motivations and political conditions.  The show closes December 22nd.

This entry was posted on Monday, October 29th, 2018 at 9:53 pm and is filed under Art News, Featured Post, Show. You can follow any responses to this entry through the RSS 2.0 feed. You can leave a response, or trackback from your own site.