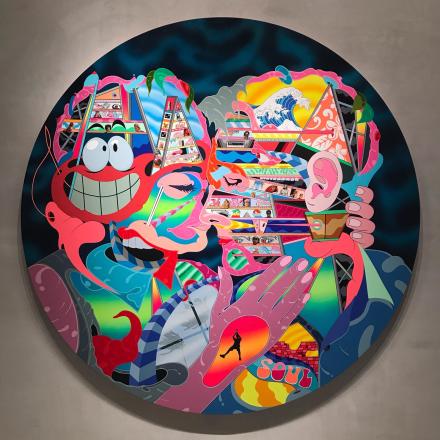 It’s hard to boil down the vivid, swirling compositions of painter Erik Parker into any one point, or even a series of entry points. His canvases combine pop cultural signifiers, swirling cartoonish caricatures, and a bright, day-glo sentiment as if his paintings were in the midst of some high-contrast meltdown. This approach gets a series of conceptual and figurative workouts in the artist’s show of works this month at Mary Boone Gallery, which compiles a range of pieces mixing both figurative and abstract techniques into an almost inextricable mass. 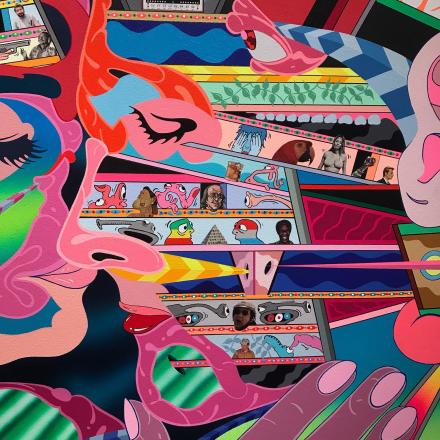 A highlight of the exhibition is a series of the artists tondo paintings of various sizes depicting pools of water within luxuriant landscapes. Parker’s compositions, characteristically assembling intense colors and serpentine brushstrokes into a horde of divergent scenes and scenarios. Floral masses burst with different neon shades, painted as if Parker were glimpsing out from behind the trees or from a hiding place within a a clump of bushes. 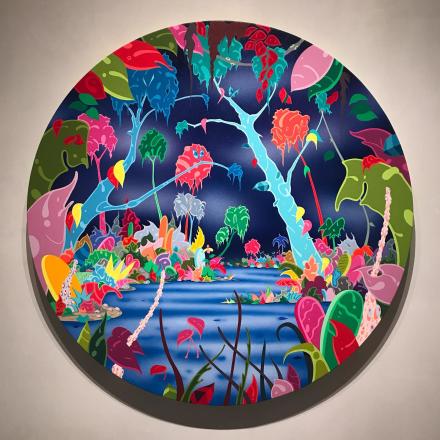 These motifs are repeated throughout the show, both in the tondo landscapes presented in the main group of paintings, and also in a series of figurative compositions, portraits of sorts, shown nearby. In these pieces, Parker seems to assemble selections of graphic memories, cultural fragments, and even the odd pair of cartoon googly-eyes into an ever evolving landscape in its own right. By comparison, his pieces depicting these “human” forms, become something of an assemblage of elements, turning the landscapes nearby into studies, or perhaps rudimentary materials in the creation of his own internal mythology. 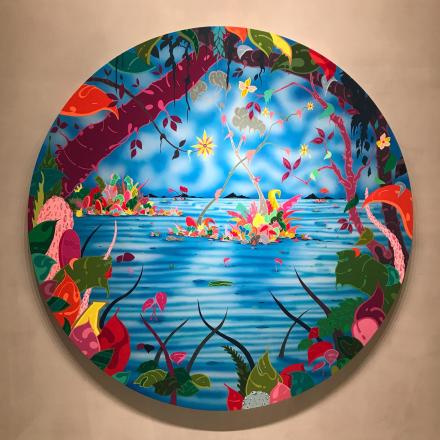 It’s an interesting point of entry for an artist whose work seems to borrow so clearly from the language and formulae of modern graphic novels and comic books, serial graphic productions that seem to weave ever-more intricate networks of reference and memory into the fabric of each character’s personae. What Parker seems to do here is create a new universe in which his images dwell, one which emerges gradually, both from the perspective of his characters, and his own imagination in tandem.

This entry was posted on Monday, January 21st, 2019 at 1:55 pm and is filed under Art News, Featured Post, Show. You can follow any responses to this entry through the RSS 2.0 feed. You can leave a response, or trackback from your own site.