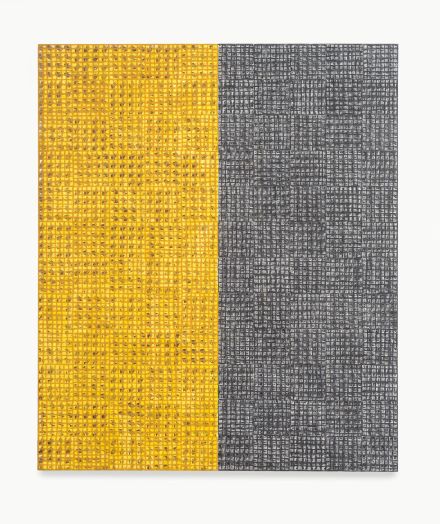 Currently on view at Lehmann Maupin, painter McArthur Binion is currently presenting a new series of works, Hand:Work, a selection of pieces that mark an important point in the artist’s career, as both an evolution of and departure from his most well-known body of work, the DNA Series.  On view through March, the show sees Binion’s work elaborating on repeated graphical motifs and minimalist arrangements. 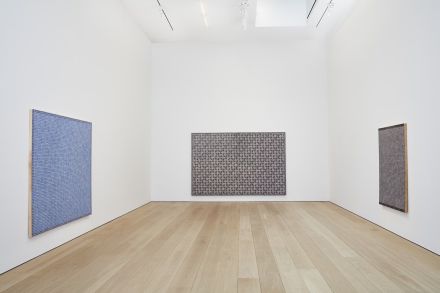 Since the 1970s, Binion has honed a distinct style of painting using oil stick and wax crayon, creating grid paintings that, at first glance, appear composed in typical minimalist style, but reveal densely layered, multimedia works with extensive reference to the artist’s personal history. While many of these past paintings have focused on the accumulation of social and bureaucratic documents and identification that amass over a lifetime, Binion’s most recent works are remarkably self-reflective paintings and give a more intimate glimpse into the artist’s labor-intensive practice.  His pieces, which have long incorporating autobiographical elements and objects, including documents and papers that showcase and twist parts of his life into the fabric of the canvas.  These personal documents represent the sum total of one’s social life: relationships, citizenship, vocation, and family life, giving the artist the opportunity to play with either obscuring or leaving bare these pieces of his life, a sort of reflection on the African-American condition as one constantly at risk of erasure or obfuscation. 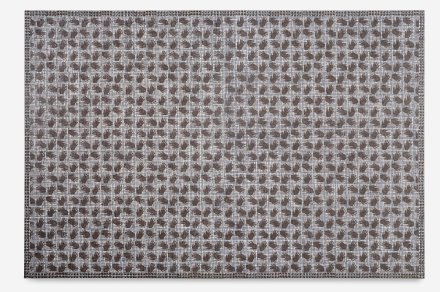 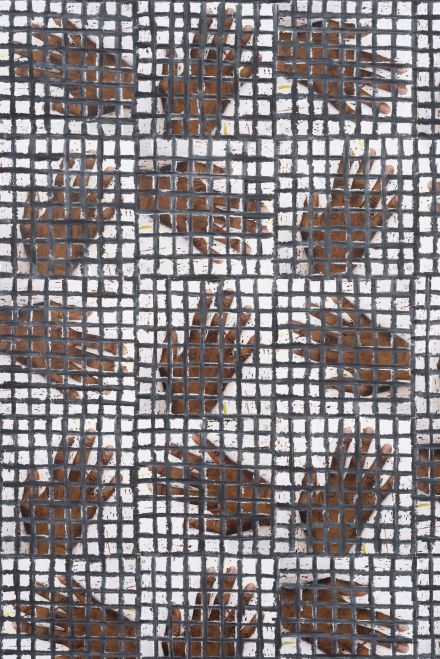 Here, this same mode is explored through repeated inclusion of images of his own hand, rotated into different geometrical forms, ultimately turning his hand into a second degree generating force, one which makes the minimalist repetitions of its from into a grid of its own.  Binion pushes his work into new conceptual territory, expanding his repertoire to that of an artist engaged in performative self-portraiture, using his hand in a manner that turns the canvas into a reflection of his body while never losing site of his work’s orientation.  Binion becomes the work in some way, as if he had allowed his pieces to drift into a space between image and object, reflection and interpretation.  His dense networks of lines and strokes over the surface of the canvas allow an intricate relationship between the act of creating the work, and the final image,.

The artist’s work is on view through March 2nd.

This entry was posted on Monday, January 28th, 2019 at 12:34 pm and is filed under Art News. You can follow any responses to this entry through the RSS 2.0 feed. You can leave a response, or trackback from your own site.