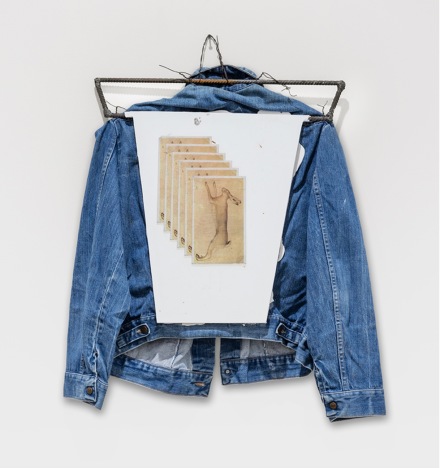 Taking over Paula Cooper Gallery’s second floor exhibition space on W 21st Street, artist Matias Faldbakken is presenting a selection of new works, including a selection of sculptures from his Screen Overlaps series (2016) and FUEL SCULPTURES (2017), as well as an install of his piece THE INTERNET in the gallery’s vitrine space downstairs. On view through the end of the week, the show emphasizes Faldbakken’s unique engagement with history and politics through surreal arrangements of material. 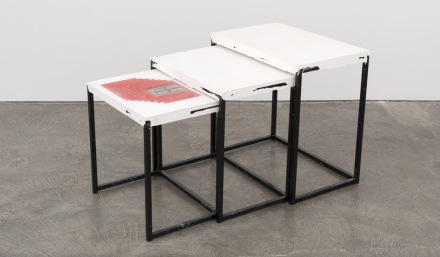 Working with a wide-range of tools and techniques in painting, drawing, sculpture and video, Faldbakken’s art mines the tension between proposition and cancellation, aggression and retreat, and language and illegibility. His work draws on concepts of hesitation, of reticence and refusal functions as a universal solvent of culturally established meanings to explore and interrogate the notions of consensus and shared understanding. 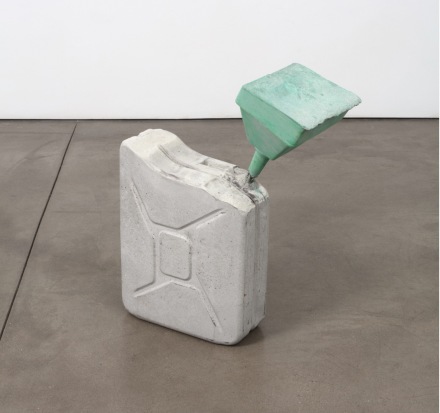 Upstairs in the main gallery, Faldbakken’s Screen Overlaps series make their U.S. debut, following up on their initial presentation at the 2016 Gwangju Biennale in South Korea. Composed of reconfigured readymades ranging from an antique meat grinder to mass-produced plastic furniture, the objects are collided with crude, screen-like plastered surfaces onto which Faldbakken applies a sequence of repeated images. Appearing as a pictorial arrangement as if a window or frame, the works literally graft digital images onto the outlines of bodies and the landscape of modernity. Sourcing and re-contextualizing images from advertising, literature, art history, and pop culture, Faldbakken examines how visual information is endlessly multiplied, transmuted and undermined in the illimitable flow of consumer culture and the digital age. Of particular note is a deconstruction of language, not only in the moments of malfunction, but equally in the moments of precise transmission, the artist’s ruptured modes of understanding emphasizing just how media contexts and iconographies are broken and reshaped by their containers. 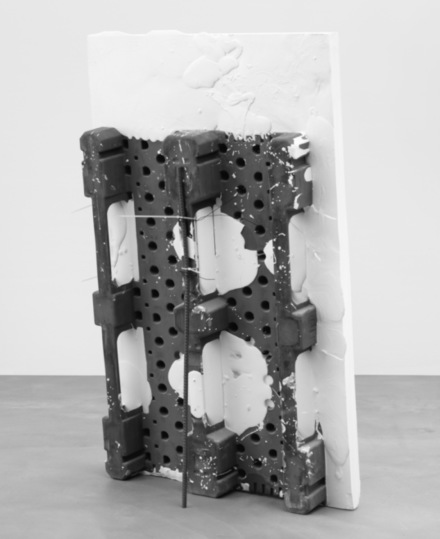 Also presented in the exhibition are works from the artist’s FUEL SCULPTURES (2017). Using funnels, jerry cans and plastic jugs as casting molds for poured concrete sculptures, Faldbakken renders visible the innards of these ubiquitous items, collapsing internal and external forms. Faldbakken’s work in this series lends something of a sinister political undertone to the show, the sense of lurking structural violence and protest, as if these works were pulled from the landscapes of political protests around the globe. Paired with the other works on view, the artist seems to tacitly understand the acts and symbols of political engagement in the streets and against the barricades, here exploring the tools of resistance even as we are increasingly drawn into the complex nodes of modern digital networks. 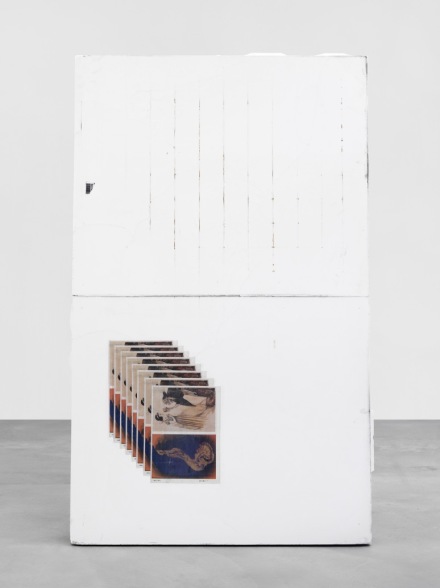 For a fitting contrast. Faldbakken’s twenty-year-old installation, consisting of solely the words “THE INTERNET” broadcast in a bold graphic font across the wall. Otherwise left entirely bare, the ambiguous interior space allows for a multitude of readings, ranging from notions of authorial veracity and expansiveness to artifice and void. First made in 1999, the prescient work draws greater associations of urgency when considered against the contemporary digital landscape, and the works on view upstairs. For those searching for an answer to the feelings of disorientation and tubulence represented by the pieces upstairs, Fadbakken seems to add a comical exclamation point on the viewer’s way in and out.

This entry was posted on Thursday, April 4th, 2019 at 2:35 pm and is filed under Art News, Featured Post, Show. You can follow any responses to this entry through the RSS 2.0 feed. You can leave a response, or trackback from your own site.