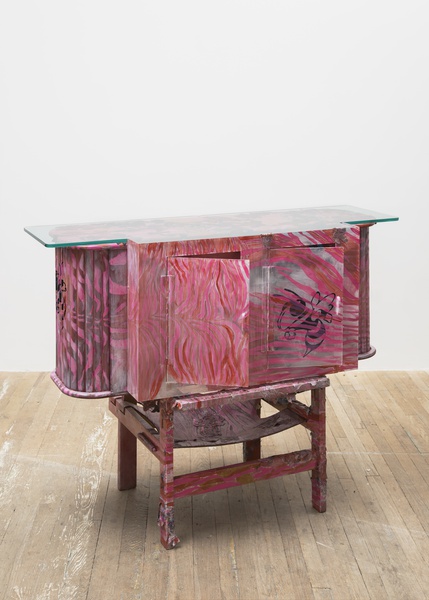 On view currently at New York space Bridget Donahue, artist Jessi Reaves has returned to her uniquely inventive turn on sculpture. The show, which draws on the shared languages of design, interior space, domestic languages and the possibilities of these elements to work in tandem, presents a series of floor sculptures and hanging works, investigating and reposing questions of varied histories of making, and how they ultimately converge, twist, and reform. 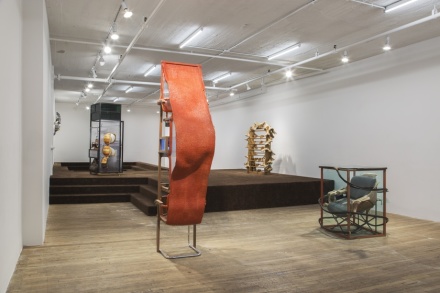 Reaves’ works are wildly constructed, drawing on plywood, sawdust, foam, wood, car parts and plexiglass, often complemented with finishing touches like silk, leather, zippered covers and glass. They are, to some degree, an unassuming set of elements, applying found materials and pieces in conjunction with her own sculptural embellishments. Irrational and imperfect, their human scale and materials reference historical and archetypal forms, their compiled pieces and parts unifying in a grand operation that mixes together varied concepts and histories of both labor and design. Reaves replaces stylistic details one might otherwise associate with craft, such as carving, inlay, exotic wood grain, joinery or tufting, with her own methods and flourishes, pulling together a range of ideas into a shared space. Drawing on different skills and concepts utilized by craftsmen in the production of furniture and other hand-built goods, Reaves’s work approaches the object as the summation of its historical notes. In one corner, a cabinet structure bears a series of cartoon mascots, both referencing a sort of working class analog to the high-art context in which the piece is exhibited, and simultaneously providing an aesthetic embellishment that pushes the work into new zones. 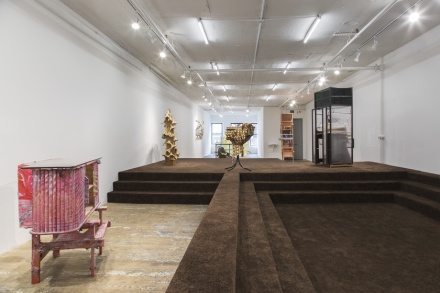 Transparency is at the core of her work, the sense of both exposing and emphasizing craft while also using its framework as a way to push works beyond easy readings. While Reaves’ construction techniques are improvised, drawing upon rudimentary building and stitching knowledge, her ideas allow these moments of reinterpretation to act as an aesthetic marker in its own right. Marker lines that guide her while cutting wood or foam, for instance may or may not determine the final shape, but remain visible, while elsewhere masses of various elements are heaped together and held in place by single parts and pieces from other pieces of furniture. What happens in turn is a sort of exercise in late capitalism, whole threads of mass-market goods and design elements being reduced to mere material for re-consumption and re-translation.

The show is on view through May 12th. 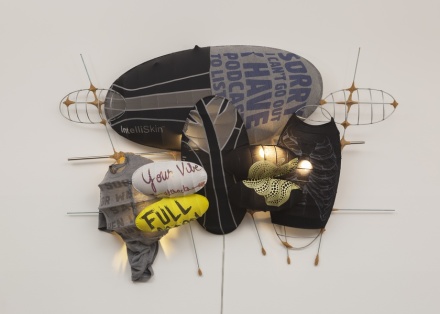 Jessi Reaves, Drive through the back of your eyes (2019), via Art Observed 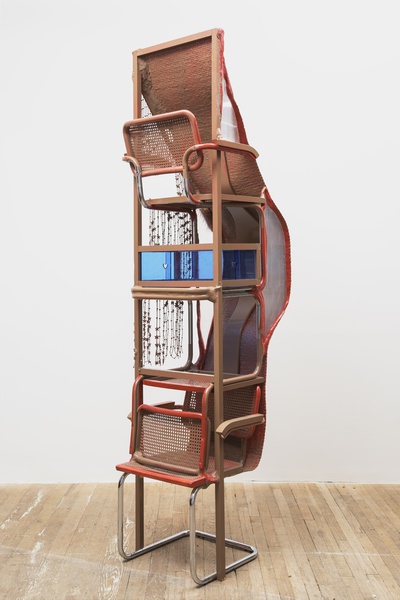 This entry was posted on Wednesday, April 10th, 2019 at 1:46 pm and is filed under Art News, Featured Post, Show. You can follow any responses to this entry through the RSS 2.0 feed. You can leave a response, or trackback from your own site.