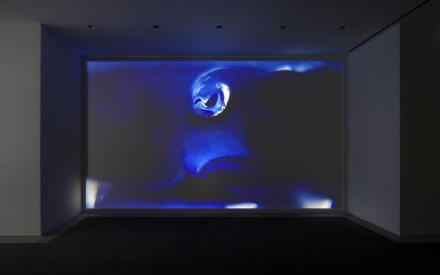 Taking over the exhibition spaces at Gladstone Gallery’s 24th Street locations, artist Philippe Parreno once again transforms the space into a roving systemic experiment, setting up varied inputs and explorations to contribute to a shifting sensory experience. Dwelling on notions of interrelated systems and interactions of various elements, Parreno’s work centers around his film Anywhen In a Time Colored Space (2019) and the systems set up to facilitate its exhibition. 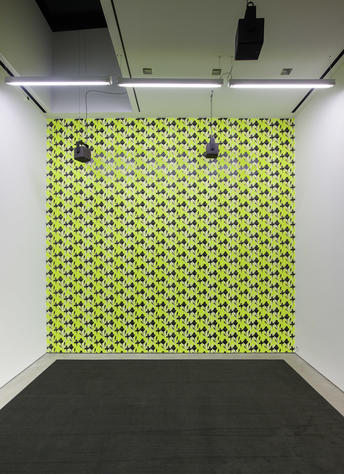 The film centers around various shots of a live cuttlefish, which is capabble of changing its its body color in response to outside inputs, such as light, sound and vibration, a note that Parreno’s text (read by Nina Conti), seems to emphasize as a physical manifestation of underlying thought processes. Performing the artist’s own writing integrated with fragments of James Joyce, the amalgamation of words read by Conti makes explicit Parreno’s interest in artificial, digital, and organic matter, and particularly how these forms of life communicate. Exploring their interrelation to digital technologies, Parreno’s work explores how these mollusks might “interact” with the viewer, its changing colors and sensory systems seem to transmit and transpose events in space. 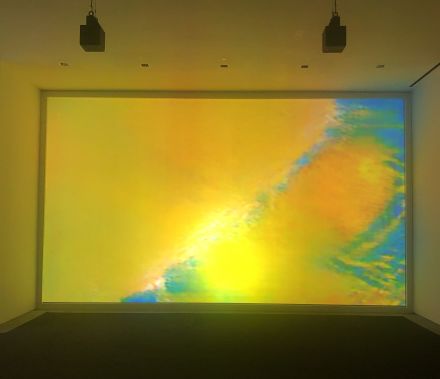 The work also incorporates another of the artist’s pieces, ‘Next Frame Prediction,’ which recalls the rewinding of video cassettes as a digital tool both replays the film and seeks to generate new frames from a predictive script seeking to replicate the video. However, various elements may interfere, resulting in a range of possibilities that might include a new version of the piece, or a perfect copy. 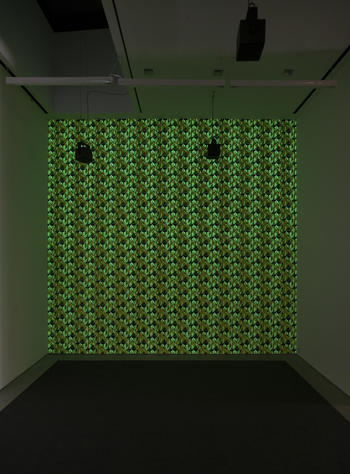 In conversation with this work, select walls of the gallery are covered in a phosphorescent wallpaper depicting repeating black irises, drawn from Parreno’s 2012 film, Marilyn, which conjures up the presence of Marilyn Monroe in the set of a suite at the Waldorf Astoria Hotel in New York, where the actress lived in the 1950s. The ghostly figure that repeats throughout this work represents signature components of Parreno’s practice: blurring the lines between the past and present, and the real and unreal, by bringing the past of the hotel and the hypothetical future of the film into the gallery. Accompanied by lights that occasionally flicker and fluctuate in tone, Parreno’s work pushes the viewer into a surreal engagement with the perception, and ultimately, the generation of the exhibition.

The show is on view through April 13th.

This entry was posted on Wednesday, April 3rd, 2019 at 2:45 pm and is filed under Art News, Featured Post, Show. You can follow any responses to this entry through the RSS 2.0 feed. You can leave a response, or trackback from your own site.