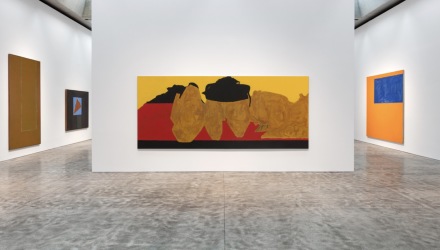 There are many moments during Sheer Presence: Monumental Paintings by Robert Motherwell, a show of large-scale works by the American master, where one feels inundated with color and line. The artist’s works, either towering over the viewer or stretch across the walls of Kasmin Gallery’s flagship space, are unified under a fitting show title: their magnificent presence often captivates the viewer and pulls them deeper into the space of the canvas, even in the show’s most minimalist approaches to surface.

As one of the most novel and confident mark-makers of the Abstract Expressionist era, Motherwell consistently turned to the monumental canvas to pursue his lifelong ambition of realizing “sheer presence, beingness, as such, objectivity and true invention,” and the show on view here is one of the first dedicated in particular to this mode of working as a concept, comprised of eight works spanning the 1960s – 1990, including a core group of paintings from the collection of The Dedalus Foundation. Continuing an ongoing collaboration with the Foundation, Kasmin Gallery has made for a striking and ongoing conversation with the artist’s oeuvre. 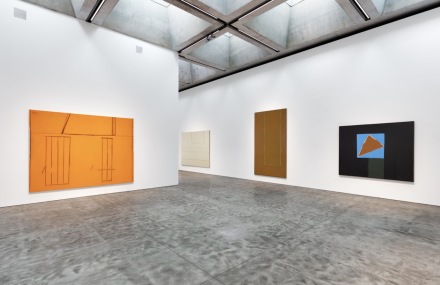 The paintings in the exhibition are representative of several major themes explored by Motherwell throughout his career. Dublin, 1916, with Black and Tan, 1963-64, at once alludes to the artist’s continued engagement with social and political concepts, relying on color and language as dual representatives of fraught political situations while framing the powerful energy of his brushstrokes as stand-ins for a more destructive kind. Another highlight, Open No. 97: The Spanish House, 1969, is a striking composition from the artist’s seminal Open series. The work displays an expanse of vibrant orange, circumscribed by architectural lines. Its title refers to a house in the Spanish town of Cadaqués, a photograph of which Motherwell had on constant display in his studio—a testament to his enduring dedication to Spain as a subject. 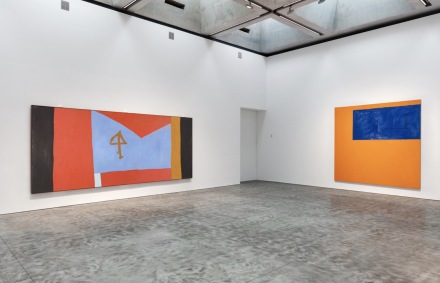 For Motherwell, it was substantial scale that allowed for his intuitive gesturally to beHis pervading use of large, planar areas of color and spatial ambiguity give his works ample space for concepts to unfold, with stretches of empty canvas or oscillating lines allowing the viewer to move across its space in the same way that one might trace a thought. Welcoming a distinct lyricism and gravity in conversation with his deft movements, the show is a testament to Motherwell’s thinking through of the space of the canvas as much as his physical marks upon it.

The show closes May 18th. 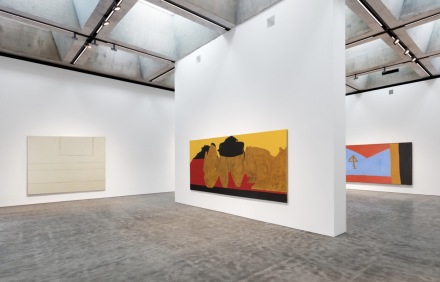 This entry was posted on Tuesday, April 16th, 2019 at 2:50 pm and is filed under Art News, Featured Post, Show. You can follow any responses to this entry through the RSS 2.0 feed. You can leave a response, or trackback from your own site.