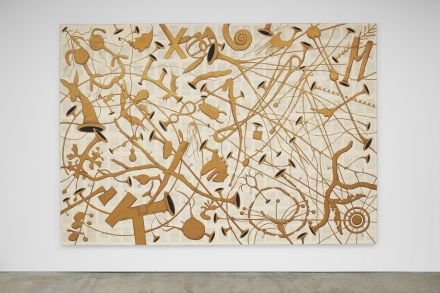 When artist Tim Rollins passed away in December of 2017, the public commemoration for the artist seemed to touch every corner of the art world. Countless figures from across the spectrum of New York’s diverse creative communities paid tribute to Rollins’s impact on New York, and in many cases, personally on their practice, particularly younger artists with experiences either collaborating with him or working closely on past projects. 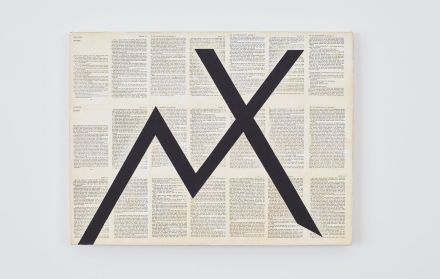 Rollins, who first began his career teaching art for special education students in a South Bronx public middle school, had a distinct sense of the performative and the public, and how these frameworks could function in wide-ranging social contexts, using his work in the Bronx as a way to forge broad intersectional dialogues with his students and their communities. Dubbing the students who worked closely with him as Kids of Survival (K.O.S.), Rollins and company would create dense grids of collaged paper, nuanced mark-making techniques, and swirling non-figurative markings. This body of work would make up the first major output of the artists’ ongoing collaborations, and gets a prime gallery debut this month at Lehmann Maupin, the first since the gallery accounted the representation of Studio K.O.S. only a few months prior. 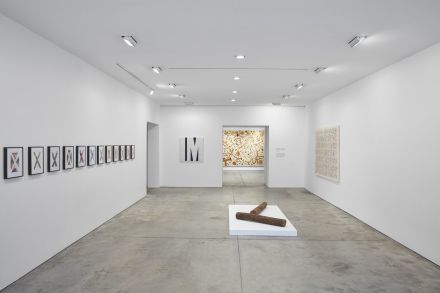 Curated by Ian Berry, who organized the group’s first major traveling retrospective and monograph, Tim Rollins and K.O.S.: A History, in 2009 at Skidmore College’s Tang Teaching Museum, Tim Rollins and K.O.S.: Workshop runs through many of the collective’s most significant series, touching in issues of race, identity, history, and politics, spanning from 1987 to 2016. The exhibition also marks the launch of Studio K.O.S., which will host Saturday workshops at the gallery throughout the exhibition (participants will be coordinated with local schools). The show also marks the creation of a second iteration of K.O.S., an independent body named Studio K.O.S., which will continue arts education and youth mentorship spearheaded by several of the foundational members, including Angel Abreu, Jorge Abreu, Robert Branch, and Rick Savinon. 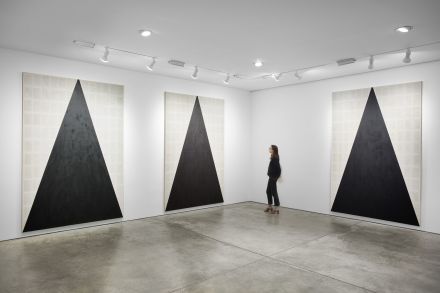 The exhibition presents a broad selection of works here, viewed with broad brushstrokes of violence and repair that mark both personal and collective histories, yet simultaneously the actions and elements included create a portrait of collaboration and community-led efforts at self-determination and self-realization. The clusters of marks, emerging from group dialogue and studied actions over the course of many years, seem to paint a picture of group in discourse, of a swarm of voices working together while remaining engaged with their own unique visions and projects. This swarm, hopetfully, will look to continue its impact as it clears out space for new generations. As Rollins said of the group: “We were making our own history. We weren’t going to accept history as something given to us.”

The show is on view through June 15th.

This entry was posted on Tuesday, May 28th, 2019 at 8:45 pm and is filed under Art News, Featured Post, Show. You can follow any responses to this entry through the RSS 2.0 feed. You can leave a response, or trackback from your own site.