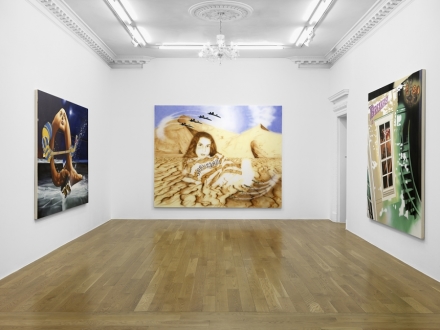 Currently on view at Massimo de Carlo in London, Jamian Juliano-Villani’s new exhibition, Let’s Kill Nicole, seems to emphasize the same sort of alternating morbidity and innocence of an adolescent suggestion of violence. In the same way that a child might suggest death as a way of solving a minor dispute, Juliano-Villani’s works seem to balance a timeless, vivid energy with simplistic, even banal scenes and subject matter. 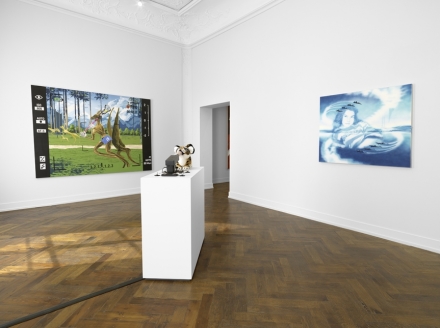 Evolving in the past few years through a range of explorations of cartoon figures, historical antecedents and divergent histories of contemporary art, Juliano-Villani has expanded her practice into increasingly intricate accumulations of painterly material, pulling together deep reference systems and structures that touch on multiple historical threads and perspectives simultaneously.   Here, for her second show with the gallery, the artist turns her attention directly towards the historical languages of both contemporary and historical art practices, transgressive performance and outsider forms, incorporating characters and styles from the broader landscape of art into her scenes. In one work, the artist alludes the outsider figure Ovartaci, who spent most of their life relegated to psychiatric hospitals. Here, depicted as a deer-human hybrid engaged in a fierce game of lacrosse, the artist seems to charge the historically-resonant subject matter with a sort of teenage angst, a posing of human drives and mental illness against that of American pop culture. 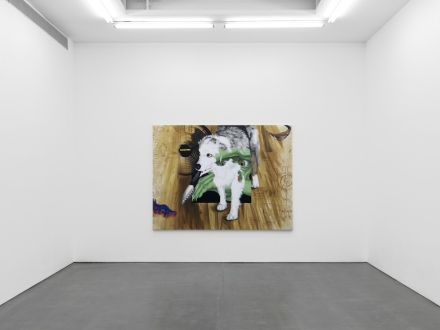 Another pair of images depict the late Brtish singer Amy Winehouse, surrounded by a selection of reptiles and sea creatures, presented as a sort of cultural salute as the artist is sent out into the great beyond. This relentless agglomeration of images and items is the artist’s trademark, a way of balancing countless strains of culture as they converge on the canvas, and turn its surface into a torrent of cultural signifiers. Rather than merely explore the images and narrative strains of her figures and interests in singular scenes, Juliano-Villani instead turns their range of assemblages into a space for nonlinear examination. Each symbol and sign gets its own take on the scene at whole, presenting a shared meaning that is cryptic, but equally at ease by dint of the artist’s meticulous hand and impressive ability to change styles and techniques. On view through the beginning of August, Let’s Kill Nicole presents a look at the artist’s increasingly deft abilities at commentary through collage. 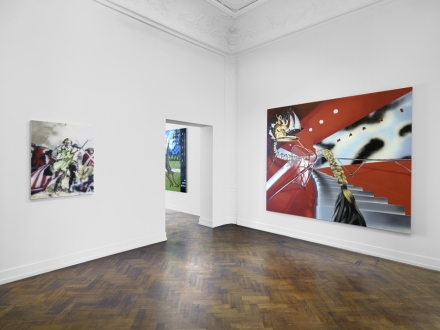 This entry was posted on Thursday, July 18th, 2019 at 2:49 pm and is filed under Art News, Featured Post, Show. You can follow any responses to this entry through the RSS 2.0 feed. You can leave a response, or trackback from your own site.