London – Yang Fudong: “Beyond GOD and Evil” at Marian Goodman Through July 26th, 2019 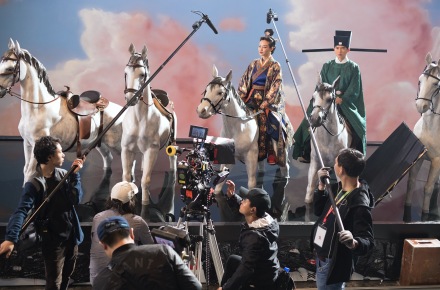 Considered one of China’s most important contemporary artists, the Shanghai-based Yang Fudong’s work has evolved through a diverse series of focal points and interests over the course of his career, moving through painting, video and other bodies of work that underscore his place as a central contributor to the landscape of Chinese contemporary art and a prominent voice in the national discourse. This month in London, the artist presents an exhibition of new work at Marian Goodman, the first with the gallery in London, and the international premiere of his epic project Dawn Breaking – A Museum Film Project.

Yang Fudong, Beyond GOD and Evil – The Divine Assembly 1 (2019), via Marian Goodman

Beyond GOD and Evil – Preface is the second chapter of Yang Fudong’s larger project ‘Dawn Breaking – A Museum Film Project’, originally conceived whilst working on his solo exhibition in Castello di Rivoli Museo d’Arte Contemporanea in 2005. Filmed live in Shanghai in the Long Museum, ‘Dawn Breaking – A Museum Film Project’ represents an interpretation of life lived during the Song Dynasty≥. For several weeks, the artist led the crew of actors and production team to carry out epic durational performances across two main filming locations within the museum, inviting the general public to view and spontaneously witness the filming process.

For the Marian Goodman Gallery exhibition, the weeks-long filming process is edited into over 20 ‘dailies’, shown across monitors, flat screens and as projections flowing through the exhibition, creating an immersive video installation. Additionally, the exhibition will feature in the first floor gallery space a series of eight unique over-painted photographs, featuring different characters from the same project. The representational nature of filmic production, recalling the work of other artists of his generation, investigating the modes of image production and the political contexts by which they are bound.

Immersing the viewer in multiple states of both production and exhibition, the artist’s work in this project reflects a complex suspension of time and identity, twisting the viewer’s engagement with the image and with history over multiple reference points and systems of knowledge. These iconographies, far more familiar to those with an experience of the history and cultural grounding of the Chinese state, take on a multifarious series of interpretations, the representations of his characters bound up in sites that are still under use, albeit as a site for the recording and reflection of historical materials. The presence of film crews, audiences and other parties is reflected in archival prints and other documents, underscoring this reflection of history as constructed. The uneven nature of the sands of time takes on all the more impact with this action.

This entry was posted on Thursday, July 25th, 2019 at 12:29 pm and is filed under Art News, Featured Post, Show. You can follow any responses to this entry through the RSS 2.0 feed. You can leave a response, or trackback from your own site.