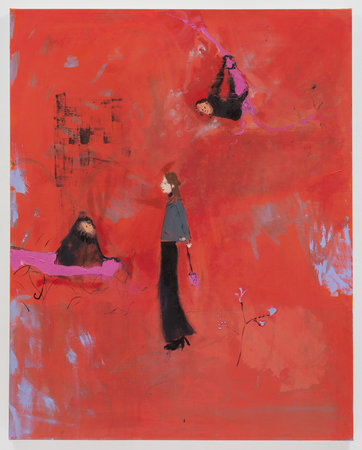 Painter Alissa McKendrick is presenting a solo exhibition at Team Gallery this month, bringing a selection of paintings to bear on the gallery’s project room series “Gallery B.” The artist, whose works mine a particular language between the surreal, figurative and narrative, makes for a refreshing summer entry in the gallery’s programming. 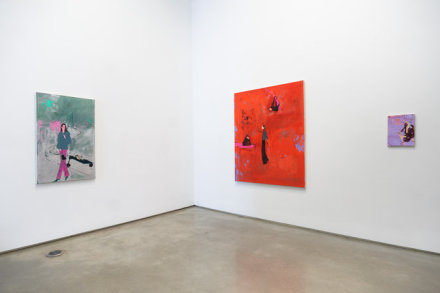 McKendrick’s paintings often center around female protagonists and impish demons, who navigate treacherous surroundings with a degree of nonchalance and abandon. Her unsteady settings fade in and out of hazy grounds, often backed by glowing underpainting, that works varied moods and concepts of what constitutes a painting’s foreground into a selection of works that pose her figures as balanced on a point between disintegration and completion. In one untitled work, her main figure seems to quite literally pause in the midst of her own creation, a scratchy outdoor scene in mid-formation around her and a rough depiction of the human body contributing to a sense of liminality and refrain.

The canvas and its spatial relationships seem to invite a comparison to the act of painting, of the site of inspiration and interpretation of the painterly impulse as a site where the artist might insert themselves, or where demonic forces might ultimately be put into play. In one large painting, a goblin and a female character, nude but for her striped apron, rev twin dirtbikes through a field where a glaring driver speeds towards a gruesome crash. As much as one may read this piece as an exploration of a sort of modern, Chagall-like abandon and transposition of varied cultural iconographies on one canvas, the work is equally a presentation of forces and drives, varied ciphers for feminine and masculine energies twisting and writhing on the canvas towards a seemingly catastrophic end. The bystander to this spectacle is a mother cradling her child, a seeming reference to a more balanced observer around whom the action and energy of work swirls, cradling her own symbol of new life and creation. Rife with symbols that crop up throughout the show — aprons, umbrellas, purses, and motorcycles — McKendrick insinuates tokens of labor, worry, and escapism that connect to overarching questions around femininity and control. 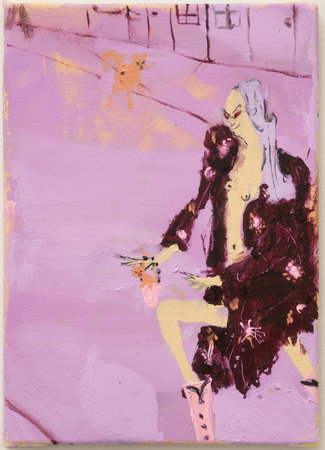 It’s noteworthy that one might call McKendrick’s works “spooky,” rather than frightening or horrifying, however. The scenes here are mischievous rather than evil, and cute rather than sublime, drawing on childish aesthetics and cartoonish arrangements to reach her final compositions rather than a deep, ruminating tension driving these works. Zaniness fittingly conveys the manic/comic action of McKendrick’s tableaux and her focus on the experience of an agent confronted (and endangered) by too many things coming at her quickly and at once. As an aesthetic not just about play but about labor and precarity, the threat of injury is always hovering about it.

This entry was posted on Tuesday, July 9th, 2019 at 8:00 pm and is filed under Art News, Featured Post, Show. You can follow any responses to this entry through the RSS 2.0 feed. You can leave a response, or trackback from your own site.