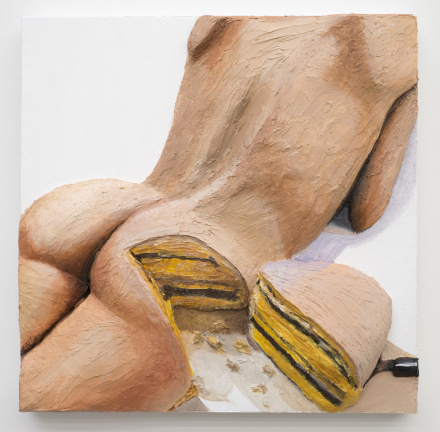 In her visceral, vexing, often grotesque paintings, New York–based artist Gina Beavers welcomes an experience of pop culture, and of the history of its depiction in modern art, as a swirling vortex of techniques and transformations. Using sourced digital images appropriated from social media and the Internet, Beavers’s work sees her repurposing the digital graphics into thickly layered compositions that border on sculpture. Hot dogs and hamburgers, human lips and sporting implements all burst forth from the surface of the canvas, a sort of exercise in both dimensionality and texture that underscore their strange abstraction, both from the original scene captured, and from the image’s prior home online.  For her exhibition at MoMA PS1 this summer, the artist continues her explorations of these cultural formats. 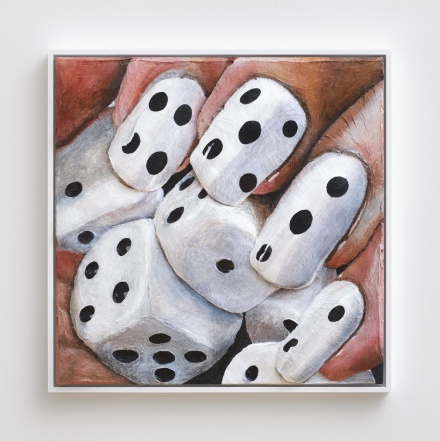 From photos hashtagged #FoodPorn to step-by-step cosmetics tutorials―Beavers’s work offers uncanny and often unsettling visions of our digitally mediated lives. The works draw on the now banal clustering of images that dictate and frame much of the experience of life online, and even, occasionally off it. Beavers takes these spaces, these accumulated digital bits, and turns them into focused collages. 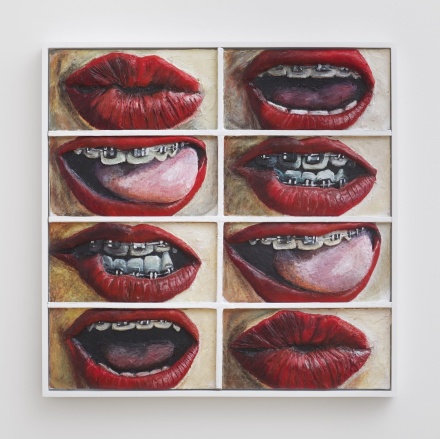 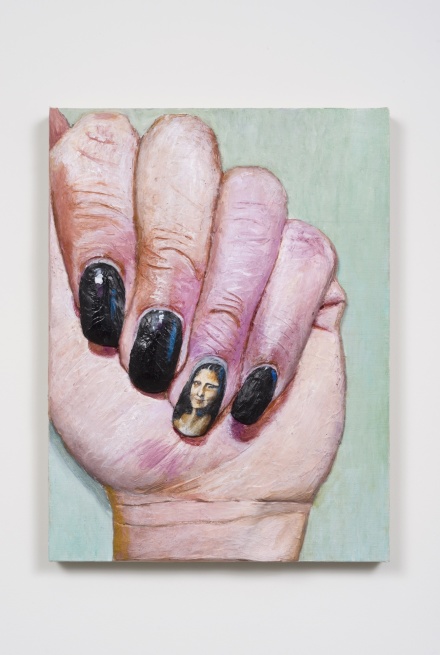 Built up through dense accumulations of acrylic or foam and imbued with almost cinematic color, Beavers’s works are at once repulsive and alluring, highlighting the gap between our digital and physical lives and how we consume, desire, and fashion ourselves to reflect contemporary culture. Deriving their titles from the captions or comments that originally accompanied her source imagery, Beavers actively anticipates that her works will be posted, shared, and re-shared across online platforms. Although composed from social media streams and destined to be reabsorbed by them, the stubborn materiality of Beavers’s paintings resists the logic of digital reproduction. The result is an echoing chamber of graphic and source, sign and signifier, with the subject and object of the image slowly blending into each other. Beavers has a precise understanding of the work as “event,” of the image both in its physical locale and its varied experiences of viewership, both in the gallery and as it circulates online. 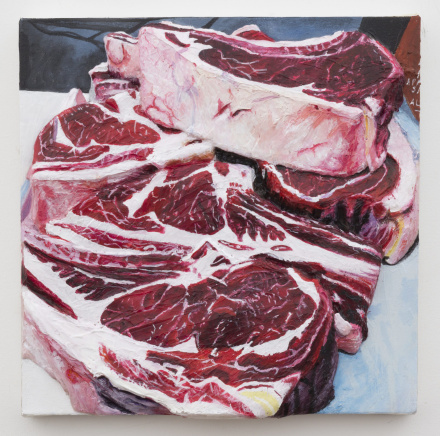 One might reference Hito Styerl’s “poor image” here, the work’s original meaning secondary to its modes of circulation, and its original subject serving only to emphasize its paths of transit. With these works, Beavers turns the idea of selfhood, of its definition and reflection in the materials of online culture, into the relatively meaningless symbols of exchange they so often are, frames of depiction and self-representation that seem to echo ever more dimly and confusedly in the face of the artist’s works. Translating expressions of selfhood of the modern era into a space where its physical trappings can fall away or diminish in weight, Beavers interrogates just what is left.

The show is on view through September 2nd.

This entry was posted on Tuesday, July 16th, 2019 at 12:00 pm and is filed under AO On Site, Art News, Featured Post. You can follow any responses to this entry through the RSS 2.0 feed. You can leave a response, or trackback from your own site.