New York – John Giorno: “Do the Undone” at Sperone Westwater Through October 26th, 2019 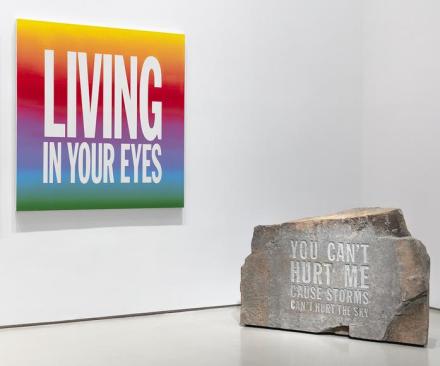 Opened this month at Sperone Westwater, celebrated poet and artist John Giorno has unleashed a selection of new sculptural works, canvases and other pieces centered around his ongoing explorations of language, energy and space. Having lived and worked on The Bowery for over 50 years, the show marks something of a return home for the artist, emphasizing his presence on the famed street while also emphatically marking his a renewed vivaciousness in his work. 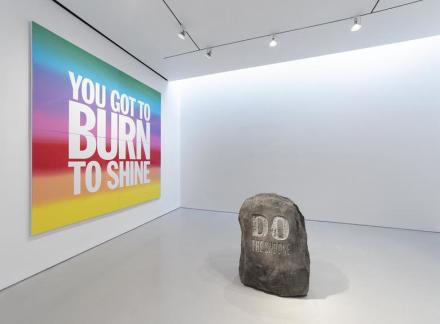 Giorno’s outsized influence as a poet stems from the expansive and multidisciplinary nature of his work, which has grown and evolved over the years to include exercises in film, painting and sound installation. Working with Andy Warhol’s Exploding Plastic Inevitable in the 1960s, he would also work with Robert Rauschenberg’s Experiments in Art and Technology (E.A.T) (1966) and with Bob Moog (1967-68), using text as a way to pioneer new possibilities for the written word and for the human voice. An early pioneer of recorded spoken word projects, he founded the nonprofit Giorno Poetry Systems in 1965, which has produced albums with hundreds of artists and poets. 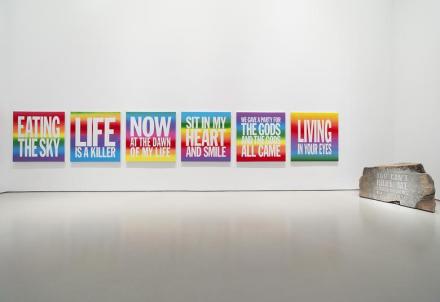 In this show, and for the first time in the United States, Giorno presents three new sculptures, found bluestone boulders into which poetic phrases are carved, marking a new investigation of his poetic style that casts it into rock in consideration of time and history. Turning his canvas works into sculptural expressions meant to last, the works seem to hint at a sense of both mortality and confidence, a willingness to cast his work in a medium that will last. Equally, the work’s ironic clashea of immaterial language and solid material play with issues of transience and permanence, the text fragments appearing as chance apparitions. 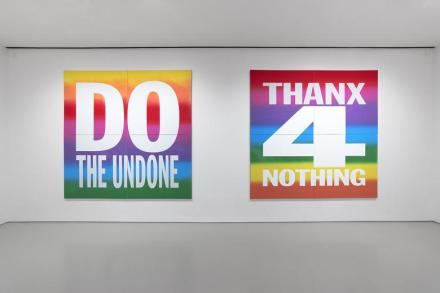 ‘
John Giorno, Do the Undone (Installation View), via Sperone Westwater

Other works continue his irreverent and energetic poetic practice, pushing enthusiasm and kinetic power as far as possible through the written text. “You got to burn to shine” reads one work, while another reads only “Eating the Sky.” These expressions of a boundless power and enduring energy, framed against the brightly colored canvases that the artist utilizes, underscores Giorno’s abilities to both reach a point of studied concision, and equally to delve into his material as a way to further expand on these points. The result are works that seem to explode with energy, casting their phrases off the surface and directly into the viewer’s hearts.

This entry was posted on Thursday, September 12th, 2019 at 11:36 am and is filed under Art News, Featured Post, Go See. You can follow any responses to this entry through the RSS 2.0 feed. You can leave a response, or trackback from your own site.